Before you stockpile Listerine, take the findings of a recent study with a grain of salt — at least until the results are replicated in a human clinical trial, several experts told Fox News.

A new study conducted by researchers with Penn State College of Medicine and recently published in the Journal of Medical Virology found that mouthwash and oral rinses can “inactivate” human coronaviruses, with the study authors hypothesizing that these common dental hygiene products could possibly help to slow the spread of the novel coronavirus itself. 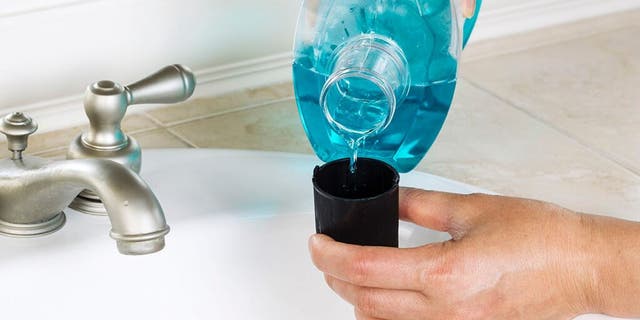 “We were clear that this is not a cure … but that the data suggest a strong potential to lower transmission," lead study author Craig Meyers, a distinguished professor of microbiology and immunology and obstetrics and gynecology, told Fox News. (iStock)

Though the study’s authors didn’t test the new coronavirus, SARS-CoV-2, when conducting their research, the human coronavirus they did analyze  — a common cold-causing strain known as 229e — is “genetically similar”  to SARS-CoV-2, leading the study authors to argue the results could be comparable.

For the study, researchers tested various oral and nasopharyngeal rinses — which included a 1% solution of baby shampoo, a neti pot, peroxide sore-mouth cleansers, and mouthwashes, namely Listerine Antiseptic, Orajel Antiseptic Rinse, and Crest Pro‐Health, among others — to determine how well they inactivated the 229e strain.

USING MOUTHWASH AFTER EXERCISE HAS THIS BIZARRE EFFECT ON BLOOD PRESSURE, STUDY CLAIMS

Human volunteers were not used; the 229e coronaviruses were grown in human liver cells in the lab before being immersed in the various solutions for 30 seconds, one minute and two minutes.

The baby shampoo solution, “which is often used by head and neck doctors to rinse the sinuses,” the researchers noted in a news release regarding the findings, was particularly effective; the solution inactivated “greater than 99.9% of human coronavirus after a two-minute contact time,” they said.

The mouthwash and oral rinses tested were also effective, they found: "Many inactivated greater than 99.9% of virus after only 30 seconds of contact time and some inactivated 99.99% of the virus after 30 seconds.”

Lead study author Craig Meyers, a distinguished professor of microbiology and immunology and obstetrics and gynecology, said the results show the amount of virus (viral load) in an infected person’s mouth could be reduced by using these common over-the-counter products, possibly helping to reduce the spread of the novel virus in specific instances, like when caring for a COVID patient or visiting the dentist.

But some experts who were not involved in the study warned the findings shouldn’t be over-interpreted, emphasizing the need for clinical trials to show similar results in humans (in fact, several have already begun recruiting.)

Additionally, while mouthwash could theoretically reduce the viral load in the oral cavity and throat for a short period of time, the dental product cannot stop the virus from replicating in cells within the body, noted many of the experts who spoke to Fox News.

“It’s one thing to show something in the laboratory, it’s another to show something similar in humans,” Dr. William Schaffner, a professor of infectious disease at the Vanderbilt University Medical Center and the medical director for the National Foundation for Infectious Diseases, told Fox News. “We need data and people first [before] making these recommendations in people.”

Additionally, Schaffner said, “mouthwash doesn’t go down into my throat, or behind my nose, or back into my bronchial tubes” or parts of the upper respiratory tract where experts say the novel virus replicates. “It could conceivably be of some use,” Schaffner said of rinsing with mouthwash to reduce the spread of the virus, “but I expect it would at be best quite modest.”

“We know that mouthwashes such as chlorhexidine and Listerine can reduce the numbers of bacteria in the human mouth when used properly (or as prescribed, in the case of chlorhexidine). However, we do not know if mouthwashes reduce the numbers of viruses in the clinical setting, and thus, healthcare providers of all types should continue to do the things that work best,” such as washing your hands, wearing a mask and social distancing, said Valerie Fitzhugh, associate professor and interim chair of the Department of Pathology at the Rutgers New Jersey Medical School and Rutgers Robert Wood Johnson Medical School, to Fox News.

“It’s important to remember that this study was not done on human subjects, but rather in test tubes; it is difficult to know if this study is clinically relevant and practical,” she continued. “Ideally, you would want to see if this could be reproduced in people; this has not been done. Also, this was done on a cell line that is different from SARS-CoV-2, so one cannot assume that what worked on a human coronavirus cell line will be equally effective against SARS-CoV-2.”

“I know everyone wants to find a cure but mouthwash isn't it,” Dr. John Whyte, the chief medical officer of the health care website WebMD, told Fox News. “COVID-19 is a respiratory virus and all the over-the-counter mouthwashes don't fight viruses in the body. That's not how they work.”

Echoing others, Whyte also pointed out that the study didn’t involve humans nor did it study the new virus.

“Rinsing was also [up to] two minutes. That's longer than most people realize or can do in practice,” he noted.

In an email to Fox News, Meyers, the lead author of the Penn State College of Medicine study, said his team was “the first to say that clinical trials need to be done” to prove the same results in people, not just a lab.

“Research does not start with human volunteers, but in the lab. You need to first demonstrate on the lab bench and in the tissue culture cabinet that there is a potential for a positive health effect. Once that research foundation is demonstrated then you can try move to human trials. I believe it is short-sighted for those who are making statements with such finality that these rinses will not help. Those who do lack an understanding of the research process,” he said, noting the fact that clinical trials are in the works on this topic “demonstrates that many experts feel there is [a] significant promise.”

“Does the use of mouthwashes remove the need to wear a mask and social distance, definitely not, but this adds another layer to protection. Are there caveats, yes, but are potential benefits, yes. All research and trials always have caveats. If everyone just sits around and worry about the caveats, ignoring the data available and the potential,” he continued, adding that his team’s findings bolster past research that also looked at how oral rinses and mouthwashes may be able to reduce the viral load of human coronaviruses. He specifically pointed to a study out of Germany that was published in The Journal of Infectious Diseases in August.

“Also, the study is not suggesting anyone do anything unusual but that doing something that is part of normal oral hygiene,” he said. “We were clear that this is not a cure … but that the data suggest a strong potential to lower transmission.”

COVID Can Harm the Infant Heart

Stop and think before buying your kids more stuff

‘Too much digital usage can affect a growing child’s brain’

Scientists confirm NEW COVID symptom: Are you at risk? ‘First reported case in the UK’

How To Pick The Ideal Probiotic For You, According To A Nutritionist