Although infection with the monkeypox virus is considered an endemic disease in certain African countries, it has now caused several outbreaks in multiple regions throughout the world. In a recent interview with the American Medical Association, scientists working with the United States Centers for Disease Control and Prevention (CDC) provide the latest information about monkeypox in the U.S. 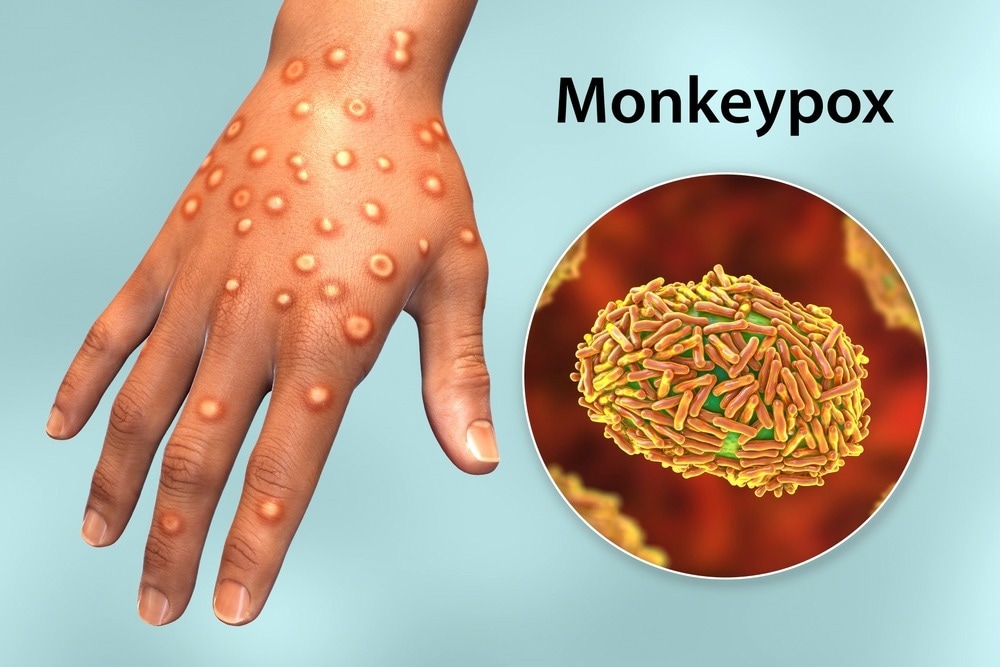 These experts included Caroline Schrodt, MD, and Jennifer McQuiston, DVM, both of whom work with the CDC’s Division of High-Consequence Pathogens & Pathology.

Dr. Schrodt is an emergency physician and the co-lead on the clinical guidance team as part of the Clinical Task Force for the CDC Multi-National Monkeypox Response. Dr. McQuiston is the incident manager of the Response initiative. Both are officers in the U.S. Public Health Service.

To date, over 600 probable and confirmed cases have been estimated across 47 U.S. states and territories. This indicates an actively spreading infection that is part of a worldwide outbreak that now includes over 10,600 confirmed cases in 65 countries.

The vast majority of these cases are in non-endemic countries. Dr. McQuiston adds, that this number is probably an undercount because of the difficulty of identifying cases.

Thus, physicians need to include monkeypox in their list of differential diagnoses and order tests for its diagnosis. Furthermore, patients with suspicious symptoms are advised to meet with their physicians for a potential diagnosis.

The monkeypox case curve is rapidly increasing in the U.S. to a similar level to that which has been reported in Spain, Portugal, and the United Kingdom. This type of pattern has been observed throughout the coronavirus disease 2019 (COVID-19) pandemic; thus, the monkeypox outbreak in the U.S. may be several weeks behind that in Europe.

In response to this surge in cases, the CDC has made testing for the virus available at a number of commercial laboratories and is promoting greater testing for patients with symptoms suggestive of this disease.

With probable community spread occurring, the outbreak is not likely to end soon.

Monkeypox is an orthopoxvirus like smallpox and vaccinia viruses that were used to create the smallpox vaccine. The symptoms of monkeypox infection are similar to those of smallpox; however, they are often milder and associated with a much lower death rate.

There are two monkeypox virus clades. One clade is primarily identified in central Africa or the Congo basin and causes death in about 11% of cases, though these were largely in people unvaccinated against smallpox. Conversely, the second clade, which is presently circulating worldwide, is called the West African clade and is associated with less than 1% mortality.

The first phase of the disease with the monkeypox virus lasts two to four weeks. Typically, the disease begins with a flu-like illness, fever, and lymph node enlargement that is referred to as the prodromal period.

Subsequently, the patient breaks out in a rash that can either be generalized or localized. These rashes usually occur at the same time until they ultimately scab and fall off. These are deep lesions, sometimes with a central dimple, and clearly demarcated from the surrounding skin.

The scabbed lesions are often itchy, with some patients developing severe pain when the rashes first develop. Notably, the rash may arise before other symptoms in some patients.

In a few patients, lesions occur only in the anogenital area, while others have so few lesions that they can be misdiagnosed as pimples, ingrown hairs, or blisters.

Due to the multiplicity of presentations, a complete examination of the skin, including the mouth, vagina, and anus, is recommended for anyone who is at high risk for monkeypox infection. This is required to detect any suspicious lesions.

Monkeypox may also accompany other infectious lesions, such as those associated with sexually transmitted infections (STIs). Therefore, it is essential to differentiate these lesions from each other to ensure an accurate diagnosis.

The clinical presentation of monkeypox may be similar to that of STIs like syphilis, herpes, lymph granuloma, venereum or other etiologies of proctitis.”

Risk factors for monkeypox infection include a history of close/intimate contact with a confirmed or probable case of monkeypox within the three weeks preceding the onset of symptoms of being exposed to multiple monkeypox infections during this period.

During the current outbreak, most confirmed cases have been among men who have sex with men (MSM). Some of these individuals also have a history of travel to a country with confirmed monkeypox cases, endemic monkeypox, or contact with animals, animal carcasses, and/or products that are known to be endemic for the virus.

Asymptomatic monkeypox transmission is now becoming a debated issue, which has led the CDC to increase access to testing. Currently, over 10,000 specimens can be tested each week in over 60 Laboratory Response Network (LRN) laboratories throughout the U.S.

Both testing capacity and awareness of testing are currently being expanded.

For example, the CDC assay is being extended to five commercial laboratories, which is expected to increase testing capacity to 60,000 each week. Other laboratories are also setting up their own assays.

The CDC is also issuing Health Alert Network Notices (HANNs) on the monkeypox virus, which allows the agency to provide important information on public health issues. Furthermore, the CDC is participating in COCA calls, which is where clinical features and management practices are discussed. COCA calls similarly spread awareness of how to prevent infection after exposure, treatment approaches, and testing.

Early testing allows individuals to be advised on how to limit further spread of the virus and for health workers to trace recent close contacts of the patient. Importantly, as testing capacities increase, a surge in cases is probable.

We need to be cognizant that these cases have probably been happening and this is our chance to detect them and then get prevention measures in place.”

Monkeypox in humans is mostly self-resolved. However, severe disease may occur in some patients, especially those with many rashes, children below the age of eight, pregnant women, immunocompromised people, or those with atopic skin conditions.

Moreover, since few monkeypox patients have received TPOXX during the current outbreak, the CDC is expanding access to investigational new drug protocols that allow TPOXX to be used for this condition.

The intravenous administration of vaccinia immune globulin is also approved for treating patients with complications arising from vaccinia infection and is being repurposed for monkeypox cases. The strategic national stockpile is sufficient to provide doses for the treatment of all patients who need it.

Two vaccines, including JYNNEOS and ACAM2000 are also available in the U.S. national stockpile and are associated with 85% efficacy against monkeypox infection. This has been estimated from the cross-reactivity of the vaccine with other orthopoxviruses.

Due to the lack of data on its efficacy following exposure to the virus, new information is still needed on ACAM2000. Nevertheless, this vaccine is considered to be safer in exposed but asymptomatic individuals who are at a greater risk for severe disease.

The JYNNEOS vaccine requires two subcutaneous doses at an interval of 28 days, while ACAM2000 requires a single dose with a specialized needle. Notably, vaccination with ACAM2000 induces an infectious lesion, which can cause transmission of the virus to other parts of the body and/or other people.

Presumed or close contacts are encouraged to take the vaccine pre-exposure in phases. It is not currently advised to vaccinate everyone, nor to vaccinate healthcare workers or laboratory staff unless they are involved in testing for this virus.

Vaccine-related adverse events should be reported to the Vaccine Adverse Events Reporting System at https://vaers.hhs.gov/.

Medical professionals should follow the CDC protocol to prevent the spread of the infection. If these clinicians encounter patients who may have the condition, they should counsel them to be tested and then stay at home until the results are available. Furthermore, any rashes should remain covered, and the individual is advised to avoid intimate contact with others during this time. Contact with pets should also be avoided.

Patients with suspected or confirmed monkeypox infection should avoid close contact, sexual or otherwise, avoid sharing dishes and bedding and use soap and water or sanitizer to reduce their risk of transmission. Furthermore, such individuals should avoid events where there is a risk of skin or sexual contact until the lesions have healed and new skin has formed.

The current monkeypox outbreak represents the first time that monkeypox is spreading through sexual activity networks. This raises concerns that the virus may now spread extensively from person to person.

Before the current outbreak occurred, the monkeypox virus primarily affected travelers from endemic regions who had contact with infected wild. These individuals would subsequently bring the pathogen back home, thus instigating a small outbreak.

In the background of the current outbreak, the CDC and other scientists are now examining older samples to try and determine how and when this epidemic began and spread.

Because of its pattern of spread within sexual networks, healthcare providers must emphasize that the entire world is now at risk of monkeypox, not just MSM. This is because infectious diseases spread across all boundaries, as evident by the COVID-19 pandemic. Nevertheless, MSM should be informed of their increased risk to allow for them to take steps and use available tools to protect both themselves and others.

Study finds survivors of weather-related disasters may have accelerated aging

Study: Republicans became increasingly vaccine hesitant over the course of the pandemic

Dozens sickened by chlorine gas in public pool in Utah

South Korea virus test-kit makers approved to export to US

Stressful Christmas? How meditation can (and can’t) help you through a nightmare lunch