Kylie-Jenner obsessive had so much filler pumped into his thin lips it BURST OUT: 24-year-old has spent £14,000 in his quest for the perfect pout despite fears his mouth may ‘fall off or explode’

A Kylie-Jenner obsessive had so much filler pumped into his lips it burst through prompting his friends and family to fear his mouth may ‘fall off or explode’.

James Holt, 24, from Manchester, was always self conscious of his naturally thin mouth and had his first fillers at just 16 years old.

Mr Holt has spent a total of £14,000 on having his pout enhanced, enduring painful lip-pumping injections every two-to-three months.

He said: ‘I have had a few problems along the way where the fillers have come out of my lips because there was too much in them, my lips rejected it, and the middle of my lips has sunken before.

‘My lips have also bruised due to their size after treatment.’

Despite the risks, Mr Holt has no plans to stop having cosmetic surgery in the future, saying he enjoys the attention, and does not want to look ‘boring and plain’.

Mr Holt, who has also undergone two nose jobs, cheek fillers and surgery to make his backside bigger, said: ‘I will never stop having surgery; I don’t think I’ll ever be happy with my face or my body.’ 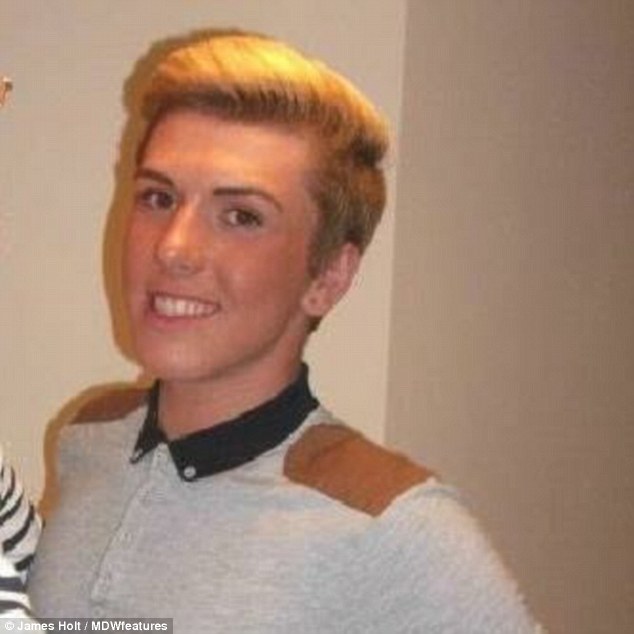 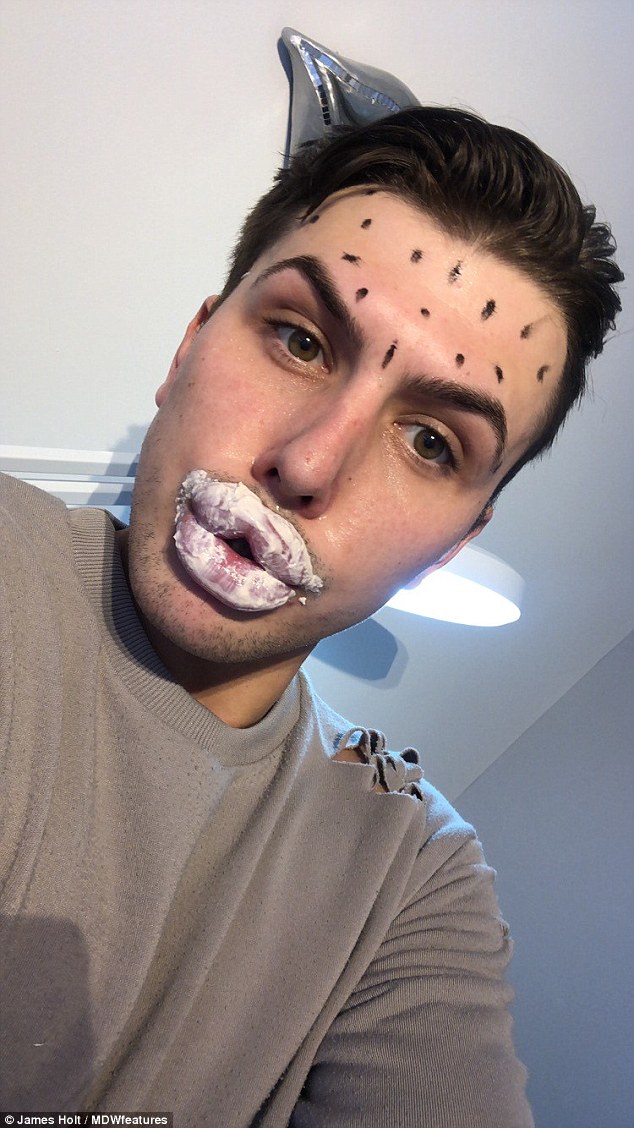 Mr Holt (pictured in a treatment centre for Botox and lip fillers) has spent a total of £14,000 on having his pout enhanced, enduring painful lip-pumping injections every two-to-three months 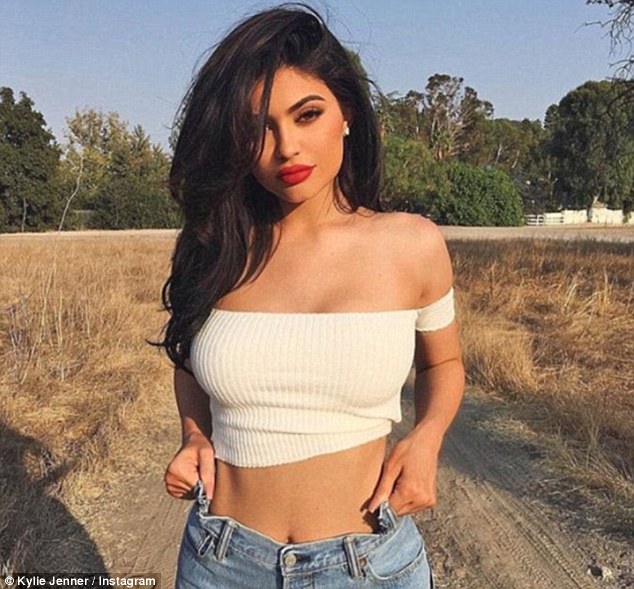 Kylie Jenner was famous for her pout, but earlier this month said she had her fillers removed

‘I wanted to change my face after seeing celebs doing it’

Speaking of why he has gone under the knife so many times, Mr Holt said: ‘I wasn’t happy with my natural look, but I feel comfortable with this fake look.

‘I’ve always wanted to change my face after seeing celebs doing it, so I thought I’d start with my lips and getting Botox injections. It felt great after the first time and I knew I’d be getting more.

‘I don’t really have any inspiration, I just go for what I feel like.

‘I want to stand out and look different. Before I looked boring and plain, I looked just like everybody else. I’ve been doing it so long that it’s like maintenance now.’

Now his face has been reconstructed, Mr Holt feels much happier and more confident, despite his appearance attracting negative comments.

Mr Holt, who previously said his surgery is paid for by sugar daddies, added: ‘I love it when people double look.

‘My friends and family aren’t best happy with the results. They tell me I’ve gone too far, that it’s too much and that I need to stop before my lips fall off or explode.

‘I know they are thinking of me but at the end of the day it’s me who wants this look, so I don’t listen. I get lots of looks in the street and I’ve even had people come up to me asking about my lips.

‘Most people just look and gasp, but I’ve learnt to live with that. Older people seem to be very shocked, but I don’t think they understand.’ 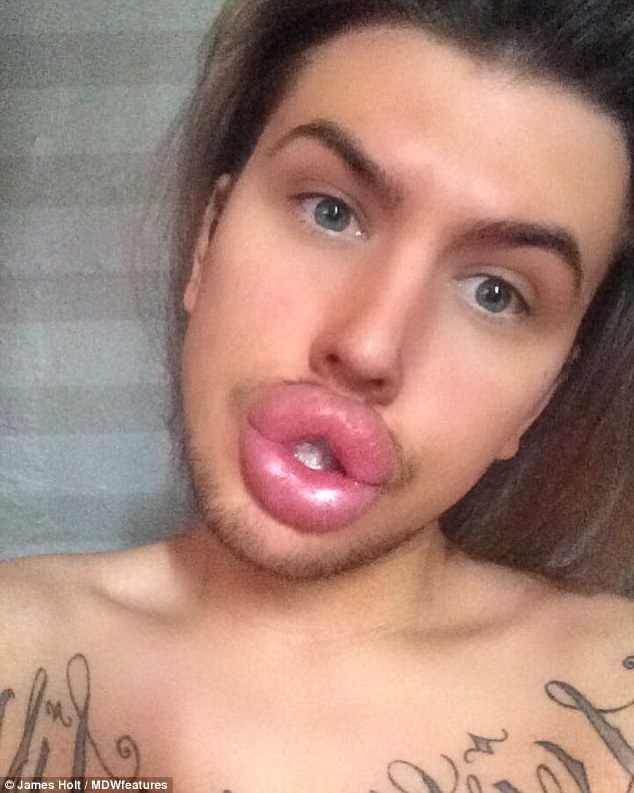 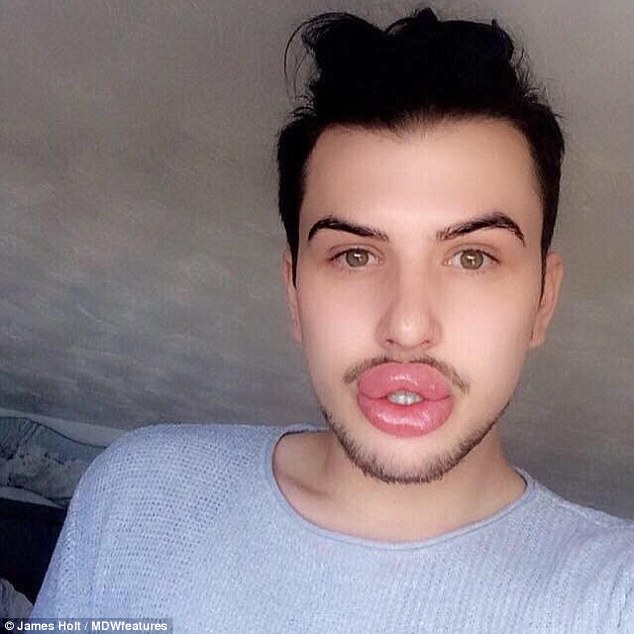 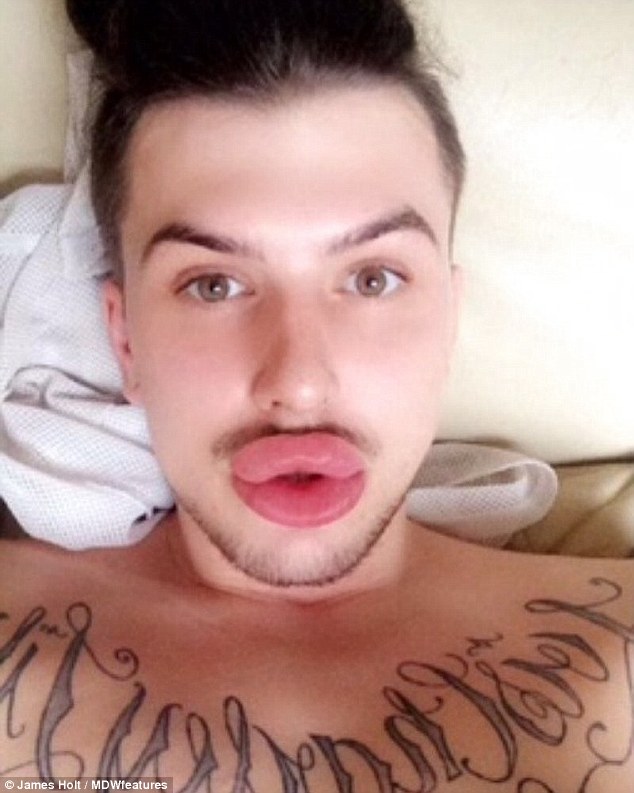 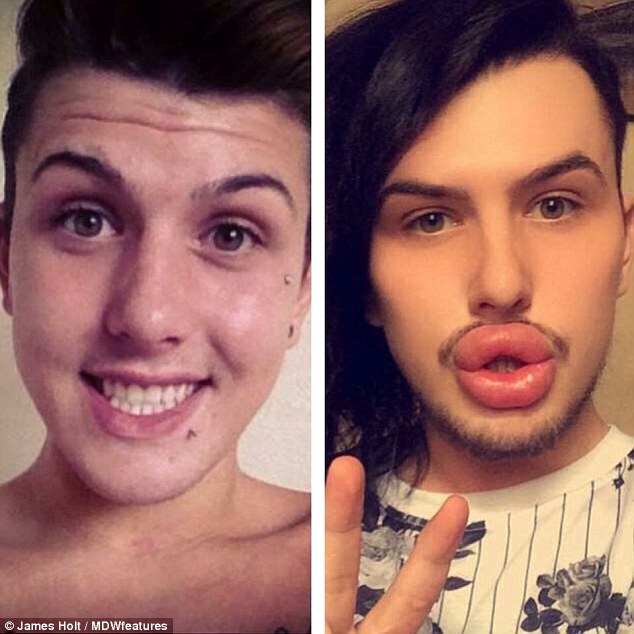 Before (left) he felt he looked ‘plain and boring’, and now loves drawing attention

‘I am looking into toe straightening’

Mr Holt’s nose jobs required he travel to Poland, with one of the procedures setting him back £4,000.

The Jenner fan has also spent £4,000 on cheek fillers and £1,000 on improving the appearance of his chin.

Mr Holt also forks out on having his teeth whitened twice a year and Botox injections in his armpits to stop him sweating, with him even considering having his sweat glands removed.

He said: ‘I also have facials every week and I’m planning another nose job for early next year because I think it’s still botched after the second surgery.

‘I can’t breathe through my nose and I sound quite nasal. I have trouble sleeping because when I’m trying to breathe out of my nose I’m not able to, so I wake up.’

Over the past three years, Mr Holt has also spent £2,000 on cold therapy to make his backside look bigger, however, he still has not got the results he desires and is considering implants, as well as other surgeries.

He added: ‘I am looking into toe straightening as my toes aren’t what I want, and it makes me not like being bare footed. I’ve tried non-surgical options but not had any good results from it.’ 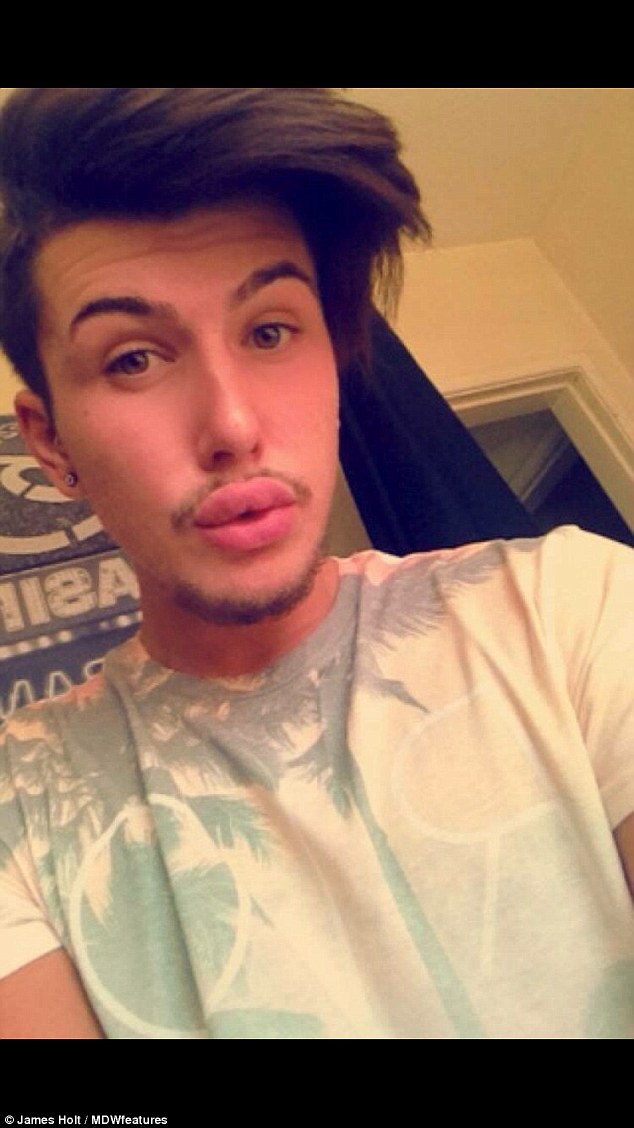 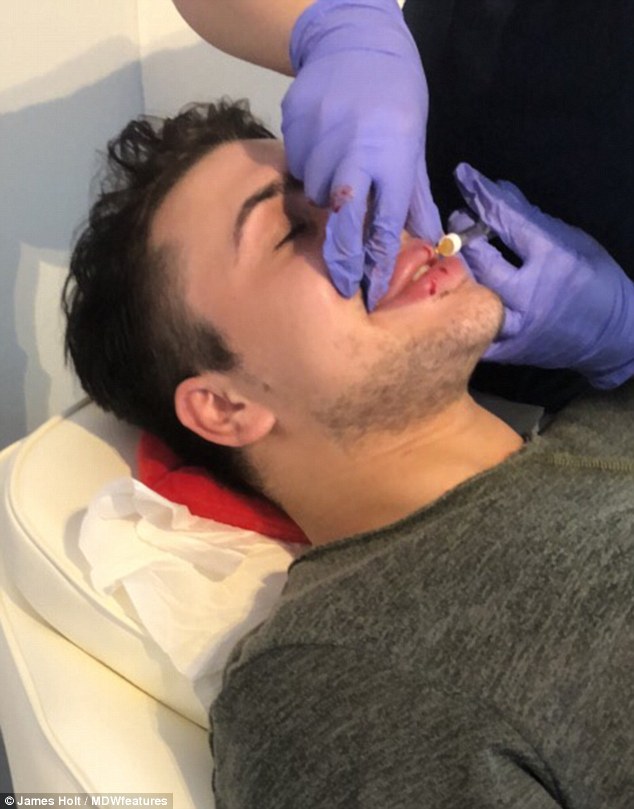 Can you run off a bad mood? New facial scanner tool measures impact of exercise on your mind

KHN’s ‘What the Health?’: Booster Time