Compound in kale, cabbage and broccoli protects against bowel cancer

Another reason to eat your greens! Compound in kale, cabbage and broccoli protects against bowel cancer

When green vegetables are digested a protein is activated that reduces gut inflammation and prevents the colon form of the disease, a study found today.

Damaged cells go on to divide uncontrollably, which can lead to bowel cancer, the study found.

Study author Dr Gitta Stockinger, from the Francis Crick Institute, London, said: ‘These findings are a cause for optimism; while we can’t change the genetic factors that increase our risk of cancer, we can mitigate these risks by adopting a diet with plenty of vegetables.’ 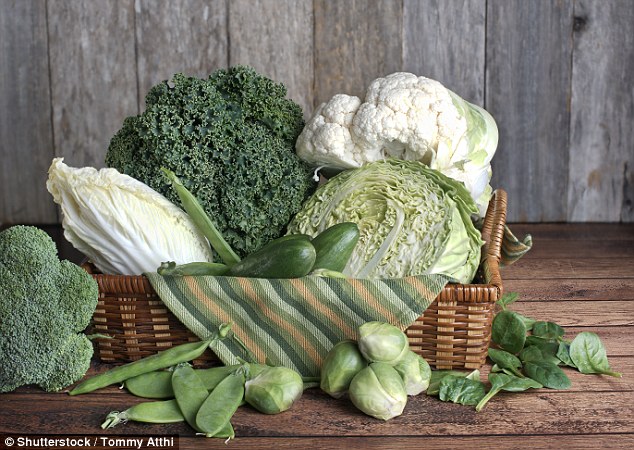 A handful of walnuts a day may prevent heart disease and bowel cancer, research suggested in May 2018.

Eating just a third of a cup of walnuts for six weeks significantly reduces the production of excess bile acids, as well as lowering ‘bad’ cholesterol levels, a study found.

Previous research has linked such bile acids to bowel cancer, while lower cholesterol levels are associated with a reduced risk of heart disease.

The scientists also found that despite walnuts being relatively high in calories, with around 28 per nut, only 80 per cent of them are absorbed, with gut bacteria using up the remaining 20 per cent.

Results further suggest people who eat a handful of walnuts a day produce less secondary bile acids, which are made in the bowel rather than the liver like their primary counterparts.

Lead author Professor Hannah Holscher, from the University of Illinois, said: ‘Secondary bile acids have been shown to be higher in individuals with higher rates of colorectal cancer.

‘If we can reduce secondary bile acids in the gut, it may also help with human health.’

The researchers analysed genetically modified mice that could not produce or activate AhR in their guts.

The rodents developed gut inflammation that progressed to bowel cancer.

Yet, the animals fed a diet rich in green vegetables developed neither inflammation nor cancer.

Lead author Dr Amina Metidji said: ‘Interestingly, when mice whose cancer was already developing were switched to the [green vegetable]-enriched diet, they ended up with significantly fewer tumours which were also more benign.’

Professor Tim Key, from Cancer Research UK, who was not involved in the research, said: ‘This study suggests it’s not just the fibre in vegetables like broccoli and cabbage that help reduce the risk of bowel cancer, but also molecules found in these vegetables too.

‘This adds to the evidence that a healthy diet, rich in vegetables, is important.’

Dr Stockinger added: ‘We often think of colon cancer as a disease promoted by a Western diet rich in fat and poor in vegetable content, and our results suggest a mechanism behind this observation.

‘Many vegetables produce chemicals that keep AhR stimulated in the gut. We found that AhR-promoting chemicals in the diet can correct defects caused by insufficient AhR stimulation.

The researchers hope to analyse the effects of green vegetables on human colon cells in the lab and eventually in people.

Dr Stockinger added: ‘There is very little literature on which vegetables are the most beneficial or why.

‘Now that we’ve demonstrated the mechanistic basis for this in mice, we’re going to investigate these effects in human cells and people. In the meantime, there’s certainly no harm in eating more vegetables!’

On Nutrition: Don’t be embarrassed to put prunes into your grocery cart

Couples Date For 17 Months Before Moving In Together

What Are the Health Effects of Air Conditioning?