Starting secondary school is scary for most children.

But youngsters should stick with their best friend and move to the same school together, a study claims.

Not only will they find it easier to settle in among the older children, but they may get higher grades and behave better.

Sticking by their bestie’s side offers youngsters stability which helps them do well at school, but only around a quarter manage to stay with their best friends. 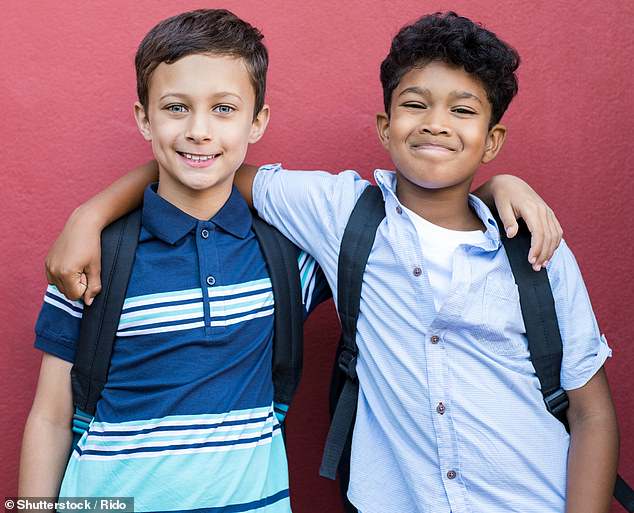 Children who were best friends in primary school and stay together when they go to secondary school do better in tests and are less likely to misbehave, according to research from the University of Surrey (stock image)

The University of Surrey measured the effects of friendship on 593 children starting at 10 secondary schools in England.

Children’s grades were recorded in the last year of primary school and the first year of secondary school, and the students were asked about their own friendships.

Those who keep the same best friend through school years six and seven have an average of 13 per cent higher academic achievement, the study found.

And they are less likely to have ‘conduct problems’ – bad behaviour – than children who are separated from their best friend from childhood.

But only 27 per cent of children successfully keep their best friend.

Study author Dr Terry Ng-Knight said: ‘Children who kept the same best friend over the transition tend to do better.

Overweight children have fewer friends and are more disliked than their thinner schoolmates, a study found in June 2017.

‘Fat-shaming’ – insulting or bullying children because of their weight – is causing obese children to be treated a social outcasts, researchers from the University of South California claimed.

In the study of 504 under-12s, overweight children claimed to have as many friends as those who were a healthy weight.

In the UK, around one in five children children are classed as overweight, with a similar number – 17 per cent – in the US.

The study was published in the journal PLOS ONE.

‘Children’s best friends change for all sorts of reasons, but the transition is likely a big factor disrupting friendships.

‘If we can find ways to support friendships during this time this may help us to improve attainment and behaviour.’

Although maintaining the crucial friendship benefits grades and behaviour, it doesn’t reduce the risk of emotional mental health problems.

But keeping other ‘low-quality friendships’, the researchers said, could increase the chance of emotional problems as children age.

The study found children who already had behaviour problems and low grades were more likely to lose their best friend.

So, Dr Ng-Knight said, those children should be given extra support to continue important friendships in a bid to stop their behaviour and grades getting worse.

‘Allowing children to choose which friends they would like to be with appears to help children maintain their friendships,’ Dr Ng-Knight said.

‘Secondary schools vary in the extent to which they actively support pupil friendships during transition.

The findings were published in the British Journal of Educational Psychology.

Vaccine Passports Would Likely Allow Many Infections to Be Missed

The Most Severe Type Of Psoriasis Can Actually Be Deadly

NHS latest: What is the Help Us to Help You campaign?