A Wisconsin man who lost his nose, hands and part of his legs after contracting a rare blood infection from dog saliva is vowing to walk again.

Greg Manteufel, 48, from West Bend, was rushed to the hospital in June after experiencing flu-like symptoms and bruising that appeared on his arms and legs

Doctors told him an infection had spread to all four of his limbs and, due to extensive tissue and muscle damage, they would be forced to amputate all of his limbs.

Manteufel was discharged from the Milwaukee-area hospital two weeks ago after three months in the intensive care unit and undergoing at least 10 surgeries – but said the experience hasn’t changed how he feels about dogs.

Now, he’s determined to be fitted with prosthetics so can he can gain back some of the mobility he’s lost. 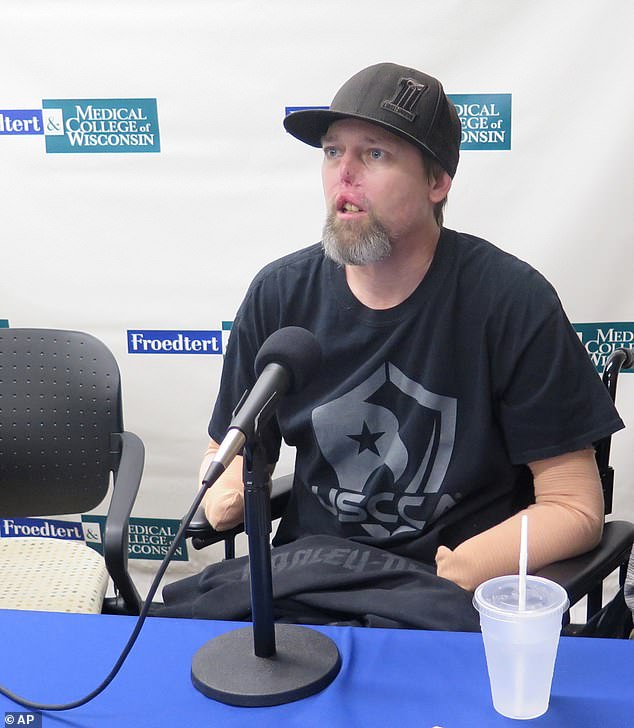 Greg Manteufel, 48, (pictured, Tuesday), from West Bend, Wisconsin, who lost his nose, hands and part of his legs after a contracting a rare blood infection from dog saliva is vowing to walk again 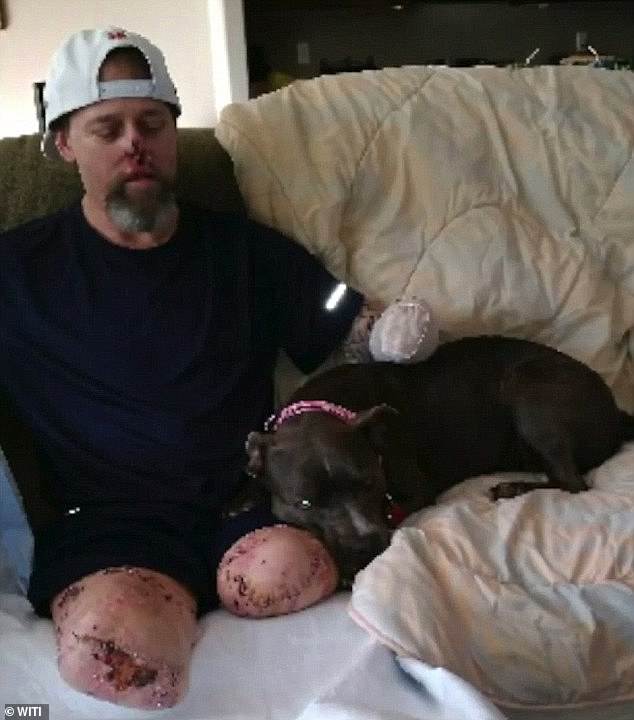 Manteufel was rushed to the hospital in June after experiencing flu-like symptoms and bruising on his arms and legs. Pictured: Manteufel reuniting with his dog, Ellie 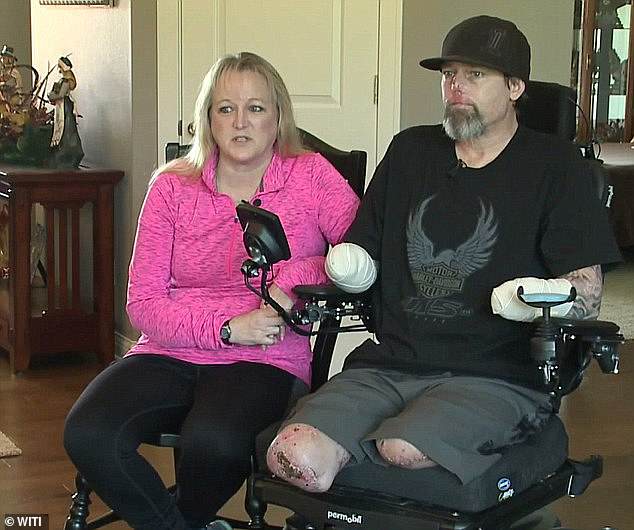 Doctors told him an infection had spread to all four of his limbs and, due to extensive tissue and muscle damage, they would be forced to amputate all of his limbs. Pictured: Manteufel, right, in his wheelchair with his wife Dawn

Greg’s blood infection was caused by capnocytophaga canimorsus, a bacteria found in the mouths of dogs and cats, according to the CDC.

One 2014 study from Japan found the bacteria to be present in 69 percent of dogs and 54 percent of cats.

The bacteria can be transmitted to humans through bites, licks, or even close proximity with the animal – seeping into the skin even without a cut or scrape.

While most people will not exhibit any symptoms if they become infected, it has been shown to cause severe illness in those who have compromised immune systems, according to a 2003 study from France.

Dr Silvia Munoz-Price, an infectious disease specialist with Froedtert and the Medical College of Wisconsin, told WITI that Manteufel’s immune system response to the infection resulted in his blood pressure dropping and decreased circulation in his limbs.

‘More than 99 percent of the people that have dogs will never have this issue. It’s just [a fluke],’ said Dr Munoz-Price. 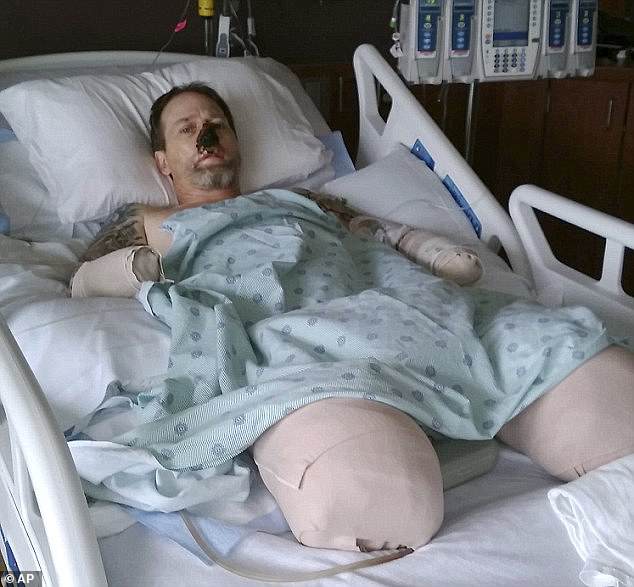 Greg was told the infection was likely transmitted via a lick from his own dog. Pictured: Greg in the hospital 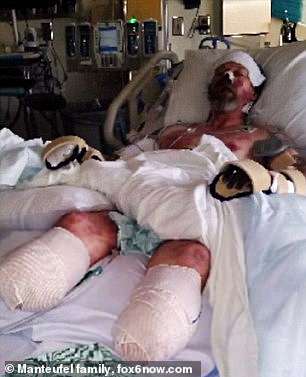 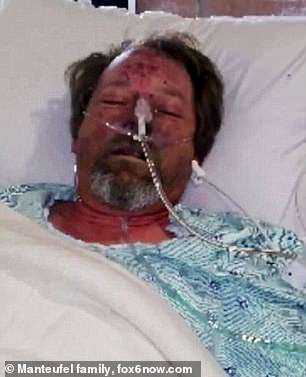 He had amputations on his legs up to his kneecaps (left), his arms up to his mid-forearms and will need extensive plastic surgery on his nose (right). After more than 10 surgeries, he was discharged from the hospital two weeks ago

WHAT IS THE BACTERIA FOUND IN DOGS’ SALIVA?

Capnocytophaga Canimorsus, a bacterial pathogen, is typically found in the saliva of cats and dogs.

It has the rare ability to cause disease in healthy individuals but has been known to cause severe illness in people with pre-existing conditions or compromised immune system.

The bacteria’s transmission can occur through bites, licks or even close proximity to the animals.

Symptoms usually appear within one to eight days of exposure, but mostly on the second day. They can range from flu-like symptoms to sepsis.

Infection can usually be treated effectively with antibiotics and is recommended for a minimum of three weeks.

But thre can be long-term side effects include amputation from gangrene, heart attack, and kidney failure.

The faster the infection is diagnosed the better the chance of survival. About 30 percent of all those infected die.

It is unclear if Manteufel had any pre-existing conditions but he developed sepsis, or blood poisoning, and his nose, both of his hands and his legs beneath his knees turned black.

Within a week of being in the hospital, doctors first amputated Manteufel’s feet and then his legs up to his kneecaps.

Then, three weeks after he was first admitted, both of Manteufel’s hands up to his mid palms were amputated.

According to a GoFundMe page, doctors were hoping to save the remainder of his arms but, due to extensive damage to the tissue and muscles, both arms up to mid-forearm had to be amputated.

After discovering the Manteufels have a pet dog, the medical staff told Dawn that her husband likely was infected after being licked.

A family friend has started a GoFundMe page to raise money to help cover his mountain medical bills. So far, more than $135,000 has been raised out of a $250,000 goal.

According to the page, Manteufel will be fitted for prosthetic limbs so he can function independently. 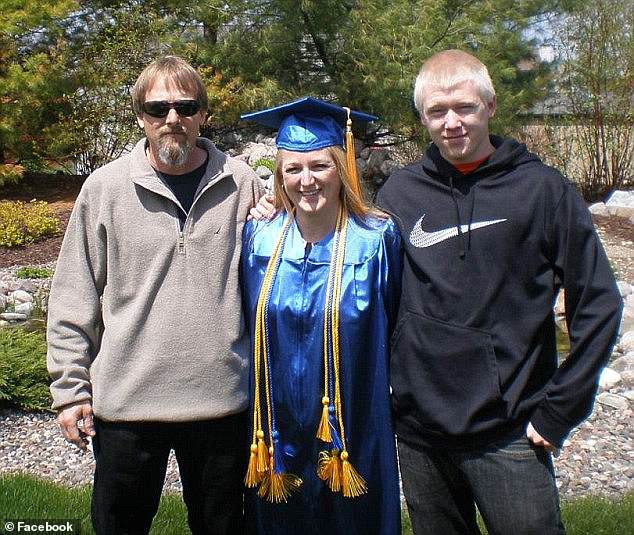 According to a GoFundMe page started by a family friend, Manteufel (pictured left, with family) will be fitted for prosthetic limbs so he can function independently 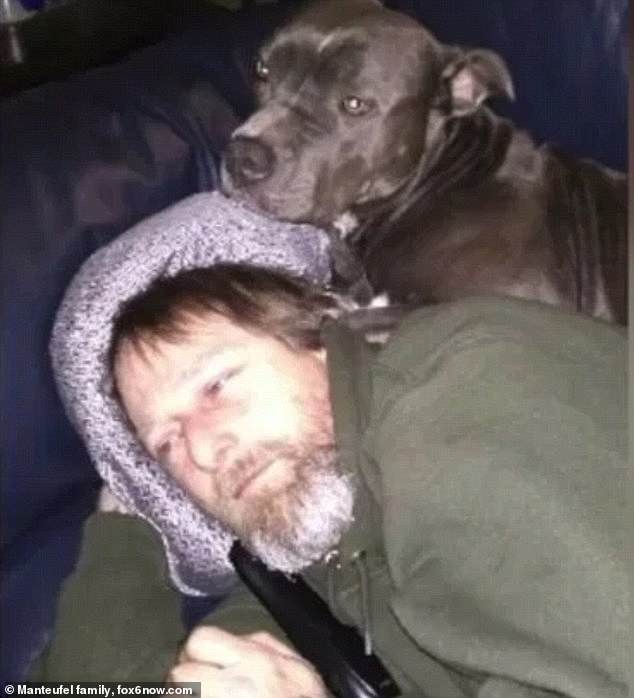 Last week, Manteufel tearfully reunited with his dog Ellie and said he didn’t want people to be scared of dogs just because of what happened to him. Pictured: Greg with Ellie

‘I couldn’t wait to see her when I got out of the hospital,’ he told WITI as he sat next to his wife in his new electronic wheelchair.

‘We don’t want people to be scared of their dogs because of what happened to me.

Such a close brush with death has also brought Manteufel and Dawn closer together again after years of marriage.

‘When we leave each other now, we make sure we say: “I love you,”‘ Dawn said.

CVD leading cause of death worldwide, but cancer rising cause in rich countries