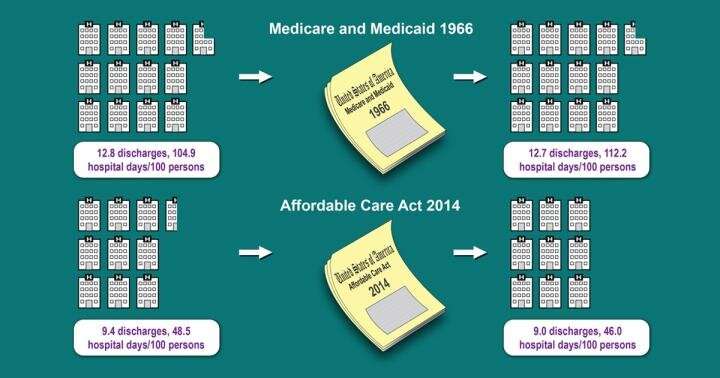 As political leaders debate the merits of a future Medicare for All system in the U.S., some analysts predict that implementing universal coverage could cause a sharp, unaffordable increase in hospital use and costs, overwhelming the system. But new research by a team at Harvard Medical School and The City University of New York at Hunter College, published today in the Annals of Internal Medicine, contradicts that assumption, finding that past insurance expansions did not result in a net increase in hospital use. Instead, researchers found a redistribution of care, with increases in hospital care among those newly insured that was offset by small decreases among healthier and wealthier Americans.

The study examined changes in hospital use among those who gained coverage—as well as those whose coverage remained unchanged—after the implementation of Medicare and Medicaid in 1966 and the Affordable Care Act (ACA) in 2014. Each of those programs provided new coverage to about 10% of the U.S. population, about the same share expected to gain coverage under a Medicare for All program. The researchers analyzed large national surveys from both the Medicare/Medicaid and ACA eras, and examined hospital use before and after the coverage expansions. Hospital admissions averaged 12.8 for every 100 persons in the three years before Medicare, and 12.7 per 100 in the four years after Medicare’s implementation. Similarly, the hospital admission rate was statistically unchanged in the wake of the ACA, averaging 9.4 admissions per 100 in the six years before the ACA coverage expansion and 9.0 per 100 in the two years’ afterward.

While the study found no overall change in hospital use, the coverage expansions redistributed care. Medicare increased hospital admissions by 3.7 per 100 among the elderly, and by 0.7 per 100 among the poorest one-third of the population, i.e., the groups that gained new coverage. In contrast, hospitalizations fell slightly (about 0.5 per 100) for younger and wealthier individuals. After the ACA, admissions rose by 1.5 per 100 among sicker Americans, but fell by 0.6 per 100 among those in good health. The researchers also found a slight shift of hospital care toward the poor after the ACA.

Dr. Steffie Woolhandler, a study author and distinguished professor of public health at CUNY’s Hunter College who is also on the faculty at Harvard Medical School commented: “The good news is that even big coverage expansions didn’t increase hospitalizations overall, indicating that universal coverage won’t cause a surge in care, and that Medicare for All is affordable. On the other hand, it implies that overturning the ACA would deprive millions of needed care without saving any money.”

The researchers hypothesized that the limited supply of hospital beds constrained the overall use of hospitals when coverage was expanded. They noted that many previous studies, such as the Rand and Oregon Health Insurance Experiments, only examined the effects of greater coverage for the newly insured, not changes among those whose coverage was unchanged, nor the societal effects of expanded coverage.

“We’ve long known that when people get new or better coverage, they use more health care,” said senior author Dr. David Himmelstein, a distinguished professor of public health at CUNY’s Hunter College and lecturer in medicine at Harvard Medical School. “What we didn’t know is what happens to those who were already well-insured, and how this plays out society-wide given the limited number of hospital beds, doctors and nurses,” he stated. “Our data shows that if you sensibly control hospital growth, you can cover everybody without breaking the bank.”

Why productivity hacks mostly don’t live up to their promise

World Environment Day 2019: How to raise an eco-conscious child

Coffee while breastfeeding: Safety and risks