Chemotherapy breakthrough: ‘Microbubbles’ loaded with drugs could destroy more than half of hard-to-treat tumours without any side effects

‘Microbubbles’ loaded with immune-stimulating drugs destroy 60 percent of hard-to-treat cancers, such as lung and breast, in mice, a US study found today.

The therapy only targets immune cells that work to fight off tumours and therefore avoids the side effects of treating all cells, such as inflammation, the research adds.

A lack of adverse events could allow drugs to be administered at around 100 times higher doses than they are currently given, the study found.

Lung and breast cancers are typically difficult to treat due to them being solid, which prevents them from reacting to immune-stimulating drugs as well as blood tumours such as lymphoma or leukemia. 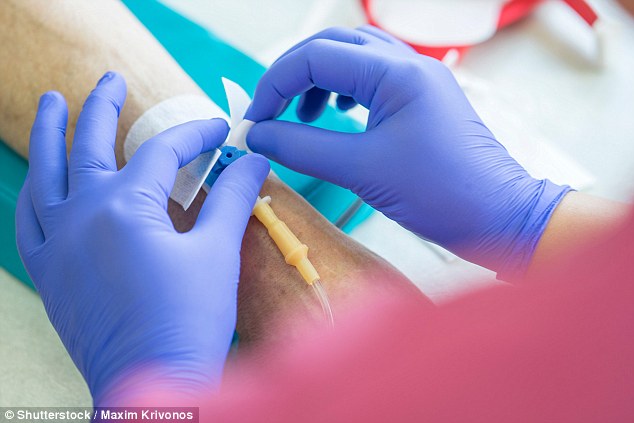 WHAT CANCER DRUGS ARE IN DEVELOPMENT?

Research released in January 2018 suggested a cancer drug is in development that could stop the disease in its tracks.

The unnamed medication targets a specific enzyme that fuels the spread of tumours.

It does this by binding to the membrane of rapidly multiplying cells, a study found.

This hijacks cancer’s ‘survival mechanism’ and prevents tumours from attaching to the protein they need to thrive.

It is unclear when the drug could be available.

The researchers analysed how fats, which are the building blocks of cell membranes, and drugs bind to DHODH.

Study author Dr Erik Marklund, from Uppsala University, said: ‘Our simulations show the enzyme uses a few lipids as anchors in the membrane.

‘When binding to these lipids, a small part of the enzyme folds into an adapter that allows the enzyme to lift its natural substrate [the substance an enzyme acts on] out of the membrane.

‘It seems the drug, since it binds in the same place, takes advantage of the same mechanism.’

Co-author Sir David Lane, from the Karolinska Institute, Sweden, added: ‘The study helps to explain why some drugs bind differently to isolated proteins and proteins that are inside cells.

‘By studying the native structures and mechanisms for cancer targets, it may become possible to exploit their most distinct features to design new, more selective therapeutics.’

How does the treatment work?

To ensure the treatment only targets tumour-specific immune cells, the researchers attached small spheres to these cells.

Coming into contact with these spheres causes the microbubbles to release the drug they are carrying.

This leads to a chemical change to occur on the surface of the immune cells, which triggers the microbubbles to break down.

Cured 60% of tumours in mice

The microbubbles were given to mice who were genetically engineered to express immune cells that target skin-cancer tumours.

In around 60 per cent of the mice, the tumours disappeared.

The researchers, from the Massachusetts Institute of Technology, were able to give the rodents around eight times as much immune-stimulating drug, known as IL-15, without side effects compared to injecting a drug that targets all of the animals’ immune cells.

A second experiment involved the scientists attaching the microbubbles to human immune cells that were engineered to target an aggressive cancer in the brain, known as glioblastoma.

This caused the destruction of glioblastoma much more efficiently than conventional treatment, according to the scientists.

The researchers plan to assess this treatment’s effectiveness in many different tumour types, including solid and blood versions of the disease.

They also wish to discover whether other drugs could stimulate the immune system as effectively.

The findings were published in the journal Nature Biotechnology.

Cancer vaccine may be available in just one year

This comes after research released last March suggested a cancer vaccine that cured 97 per cent of blood tumours in mice will be tested on humans with low-grade lymphoma later this year.

Patients receiving the vaccine, which contains two drugs proven for their safety, will not require any chemotherapy, with the jab’s side effects expected to be just fever and injection-site soreness.

If approved, researchers, from the University of California, San Fransisco, do not expect the treatment will be be available for another year or two.

Rather than creating lasting immunity, the jab works by activating the immune system to attack tumours.

This is expected to be effective in low-grade lymphoma, which affects certain white blood cells and generally responds to treatment, due to it often being detected by the immune system, unlike other forms of the disease, such as bowel cancer.

Statins recommended for primary prevention of cardiovascular disease in adults

Supplements: The B vitamin shown to ‘slow’ the progression of Alzheimer’s – new study

How to live longer: The juice that could ward off high blood pressure and boost longevity

Target Already Has the Cutest Holiday Pajamas for the Whole Family