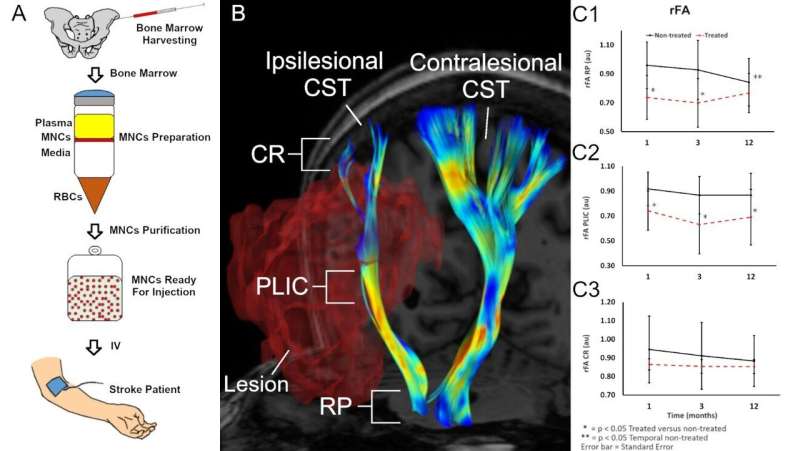 Results of a clinical trial released in Stem Cells Translational Medicine provide evidence that treating patients with an injection of bone marrow cells may lead to a reduction in brain injury after a stroke.

The study was conducted by Muhammad E. Haque, Ph.D., Sean I. Savitz, M.D., and colleagues from the Institute for Stroke and Cerebrovascular Disease at The University of Texas Health Science Center in Houston. “Nearly 90 percent of patients who suffer an ischemic stroke—the most common type of stroke—exhibit weakness or paralysis to one side of the body,” Dr. Haque said. “Injuries to the corticospinal tract (CST), which is the main white matter connection in the brain responsible for carrying movement-related information to the spinal cord, is the primary cause of this motor function impairment. In stroke animal models, we’ve seen how bone marrow mononuclear cells (BM-MNC) attenuate secondary degeneration and enhance recovery, including white matter tract remodeling. That led us to our current study.”

Previously the team led by Dr. Savitz had conducted a phase I clinical trial on the safety and feasibility of intravenous administration of autologous (a patient’s own) bone marrow-derived mononuclear cells (BM-MNCs) in patients with ischemic stroke. In that study, they reported preliminary CST recovery in the part of the brainstem called the rostral pons. In their current work, they delved deeper into this intriguing finding by using 3D anatomical and DTI images obtained from MRI scans to compare extensive longitudinal microstructural changes in the white matter of BM-MNC-treated stroke patients to a group who did not receive the cells. (DTI—or diffusion tensor imaging—is an MRI technique that is most commonly used to examine the brain and estimate its white matter organization.)

The 37 patients in the study ranged in age from 18 to 80. While all received the standard stroke treatment and rehabilitation follow-up, 17 patients whose strokes were the most severe received the additional BM-MNC injections. Three months later, MRI scans of each patient showed, as the researchers expected, a decrease in the integrity of their CST. However, scans taken 12 months after the stroke occurred showed an improvement in the CST of the 17 patients who received injections. Conversely, the CST of the non-injected group exhibited ongoing and continuing microstructural injury and axonal degeneration.

“These results suggest the possibility of microstructural stabilization in the cell-injected group as compared with the non-treated patients,” Dr. Haque said, “We envision that future clinical trials might be directed toward identifying white matter protection or repair as an important mechanistic target of efficacy studies and potency assays for bone marrow cell therapies.”

What is Von Willebrand Disease?

US election 2020: The importance of sexual and reproductive rights

Blockchain for healthcare: How CIOs should be approaching it