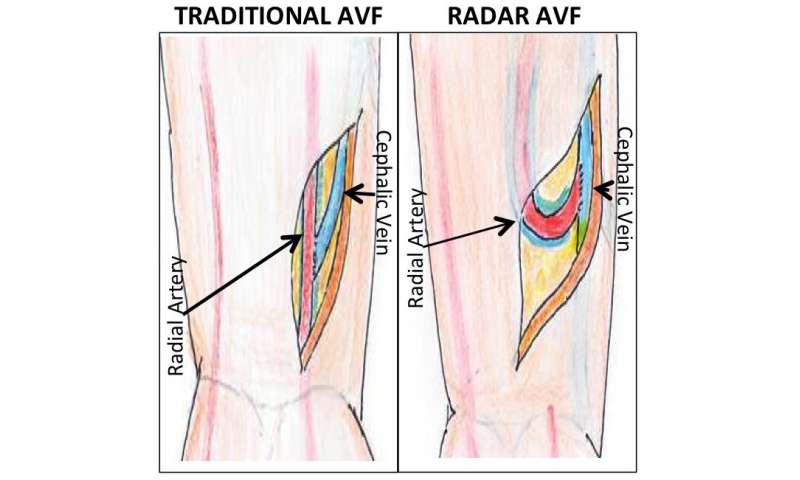 A new technique developed by a Yale-led research team improves blood flow in surgically made blood vessels used in dialysis, enables them to last longer, and results in fewer complications than the standard technique.

The findings, based on work with hundreds of patients and supported by animal studies, appear in the Aug. 19 issue of Science Translational Medicine.

Of more than 661,000 Americans with kidney failure, according to the National Institute of Diabetes and Digestive and Kidney Diseases, 468,000 are on dialysis, a method of filtering waste from the blood when the kidneys are damaged or fail. But the standard way of accessing a patient’s blood flow has shortcomings the new technique overcomes.

Typically, vascular surgeons fashion a vein-to-artery arteriovenous fistula (AVF)—a larger, stronger blood vessel—by dividing a vein in the patient’s wrist and joining it to the artery. This enhances blood flow and vein access for the two needles that route a patient’s blood through the dialysis machine and back into the body.

Yet the method, standard procedure for the last 50 years, has “the worst results of any procedure we do,” said Yale School of Medicine’s Dr. Alan Dardik, professor of surgery (vascular) and of cellular and molecular physiology, and senior author of the study. 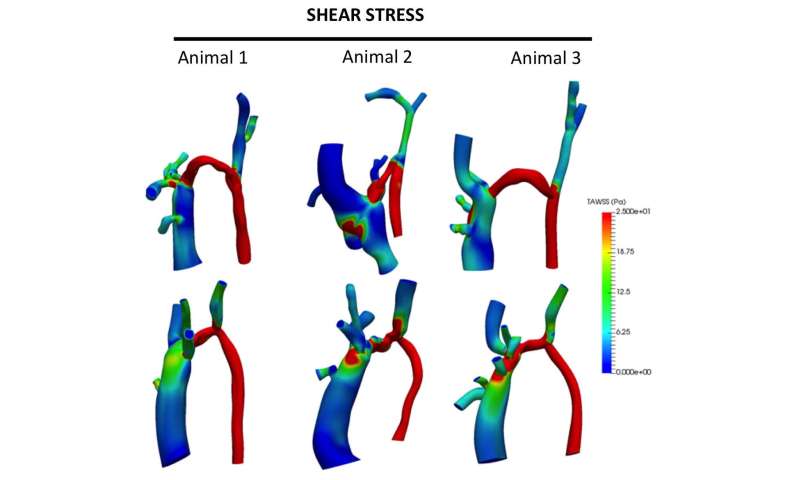 For the many cases in which the fistula can’t be maintained, Dardik said, patients need an artificial graft, which has an even lower success rate.

In the new surgical technique, known as radial artery deviation and reimplantation, or RADAR, surgeons essentially reverse the procedure, bringing the artery over to the vein. They also use a tourniquet instead of clamps to temporarily stop blood flow while operating. This requires less handling of the artery and vein than the traditional method and results in better blood flow and a more robust fistula.

“It works a heck of a lot better,” said Dardik.

Building on a 2016 pilot study of RADAR’s effectiveness involving 53 patients, the new study examined 201 patients who had the novel artery-to-vein surgery and compared them with 73 who had the traditional vein-to-artery surgery.

The researchers confirmed their findings in animal (rat) studies in which they created both artery-to-vein fistulas and vein-to-artery fistulas, and examined the differences. The results closely mirrored those for the human patients.

The animal studies also made clear why the new technique was more effective. Using CAT scans and ultrasound, researchers observed crucial differences in hemodynamics between the two surgical techniques. “The pattern of blood flow in the RADAR technique was better than the usual pattern of flow with the conventional technique,” Dardik said.

Given the significant need for dialysis, Dardik said, the new technique offers a clear opportunity for improving patient outcomes through more robust fistulas and fewer procedures to maintain access and the related complications.

Healthy practices for people with diabetes to manage their blood sugar

Tralokinumab Gets Nod for Atopic Dermatitis in Europe

Restoring health and fitness with exercise

Vitamin D deficiency: The sign when you wake up which is ‘an early’ indicator