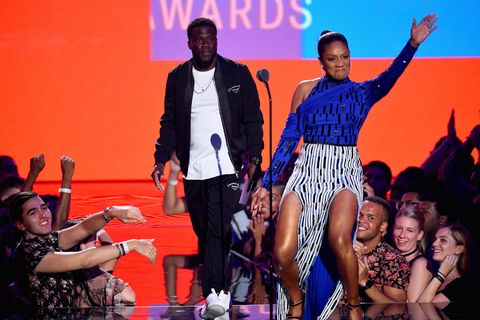 Yes, Tiffany Haddish threw shade at Fifth Harmony when she introduced one of the first awards at the 2018 MTV Video Music Awards. But can we talk about that other little joke she made…the herpes joke?

“Jersey Shore is back and bigger than ever, which makes sense,” Tiffany said while presenting with Night School costar Kevin Hart. “If you don’t get treatment, that stuff will keep flaring up every couple of years.” And just in case it wasn’t clear, Kevin Hart spelled out to everyone that the pair was making a herpes joke.

More than one in six adults in the U.S. are living with herpes, according to the Centers for Disease Control. That’s a ton of people…meaning you know several people with herpes, if you don’t have herpes yourself.

Several women have opened up to Women’s Health about what it’s like to live with the crazy-common virus in the past, and one thing is pretty clear: The stigma that you deal with when you have it is, sadly, alive and well.

Which is totally ridiculous considering that the virus is highly contagious (basically the only way to guarantee you won’t get it is just to not have any kind of sex), and most people who have genital herpes have no symptoms, according to the CDC.

This is an excerpt from one of my favorite pieces we’ve ever run on the subject—a piece in which a woman named Ella Dawson wrote about why she loves telling people she has herpes:

At the risk of sounding totally preachy, I hope you’ll remember Ella and all of the other people you know who have herpes before the next time you hear (or, even worse, make) a herpes joke. Not cool, Tiffany.

Stomach bloating: This popular sweet additive could be the cause of your bloated stomach

Coffee Drinkers — Even Those With a Sweet Tooth — Live Longer