Scientists from the Francis Crick Institute in London used state-of-the-art technology to study the tissue that surrounds mice tumours in the laboratory.

They found the healthy tissue that bordered the rodents’ malignant cells became ‘stem-cell like’ and ‘actually supported cancer growth’.

The scientists believe this demonstrates the ‘powerful influence cancer exerts over its neighbouring cells’.

They hope their study will help experts better understand how tumours trigger changes that enable them to survive. 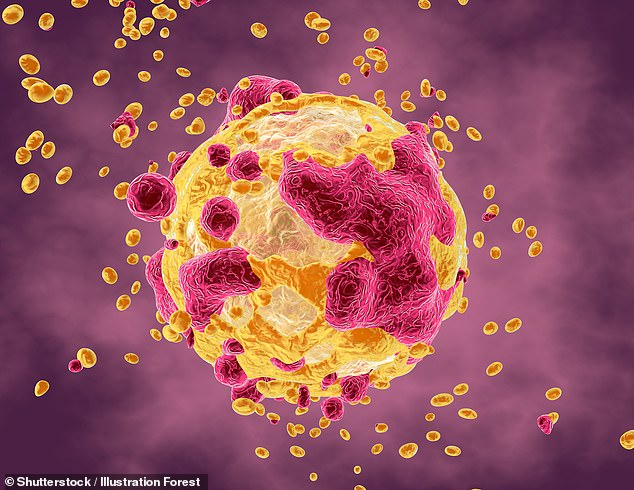 ‘Our new technique allows us to study changes to cells in the tumour microenvironment with unprecedented precision,’ lead author Dr Ilaria Malanchi said.

‘This helps us to understand how these changes relate to tumour growth and metastasis, allowing us to develop better strategies to treat the disease.

‘We discovered non-cancerous cells in the tumour microenvironment regress back into a stem-cell like state and actually support cancer growth.

‘By corrupting its neighbours, cancer transforms its local environment to support its own survival.’

One in two people born after 1960 in the UK will develop cancer at some point in their lives, Cancer Research UK statistics show.

And in the US, around 1.7 million new cases were diagnosed last year alone, according to the National Cancer Institute.

To uncover how cancer cells influence their surrounding environment, the scientists analysed mice with breast cancer that had spread to the lungs.

They engineered the tumours to release a fluorescent protein that penetrates neighbouring cells, the journal Nature reported.

WHAT ARE STEM CELLS?

Stem cells are a basic type of cell that can change into another type of more specialised cell through a process known as differentiation.

Think of stem cells as a fresh ball of clay that can be shaped and morphed into any cell in the body – including bone, muscle, skin and more.

This ability means they have been the focus of lots of medical research in recent decades.

They grow in embryos as embryonic stem cells, helping the rapidly growing infant form the millions of different cell types it needs to build before birth.

In adults they are used as repair cells, replacing those we lose through damage or ageing.

Fluorescent-labelled cells were then compared against those that did not contain the protein and had therefore not come into contact with a tumour.

The scientists found the labelled cells in the mice’s lungs had ‘stem-cell like features’, unlike the cells found outside of the tumours’ surrounding tissue.

They then mixed the mice’s ‘stem cells’ with tumours in the laboratory, which supported the cancers’ growth.

In a second part of the experiment, the researchers teamed up with scientists from the Wellcome Trust’s MRC Stem Cell Institute.

Together, the scientists used the mice’s ‘stem cells’ to create lung organoids.

These are tiny, tissue cultures derived from stem cells that can be used to replicate the complexity of an organ, according to the Harvard Stem Cell Institute.

The mice’s unlabelled healthy lung cells formed organoids that were mostly made up of the cells that line the alveoli, which is where gas exchange takes place.

However, the labelled cells taken from the tumours’ surrounding tissue formed organoids with a wider range of cell types.

‘They could change their fate to become different cell types. It demonstrates the powerful influence cancer exerts over its neighbouring cells, making them liable to change easily.’

The researchers hope their study will prompt other scientists to investigate the changes cancer cells trigger in order to survive, spread and become resistant to treatment.

‘Superstore’s’ Lauren Ash: ‘PCOS Made Me Gain 30 Pounds In 6 Months And Question Everything I Knew About Myself’

Can rare lymphocytes combat rheumatoid arthritis? Immunologists have identified the key role of ILC2 during the onset of inflammatory arthritis

International Day of Yoga 2020: Benefits of yoga and asanas to avoid during pregnancy

The unexpected ways pollution can affect your hormones