Fox News Flash top headlines for May 23 are here. Check out what’s clicking on Foxnews.com

A woman claims wearing tight-fitting underwire bras led her to develop a cyst that, when removed, left a large “hole” in her chest.

Lynne McConnell, who lives in Brighton, England, told SWNS she first purchased underwire bras in 2003 and was fitted for them by clerks at a shop. Though she returned to the store “numerous” times over the years to complain that the bras felt too tight, the store’s employees reportedly insisted they were fine.

“The staff just said that’s how they are supposed to fit,” recalled McConnell, 51, to the news outlet.

But in June 2018, McConnell developed a hard lump in the middle of her chest which, after seeking medical attention, she would learn was a cyst that had to be cut out. 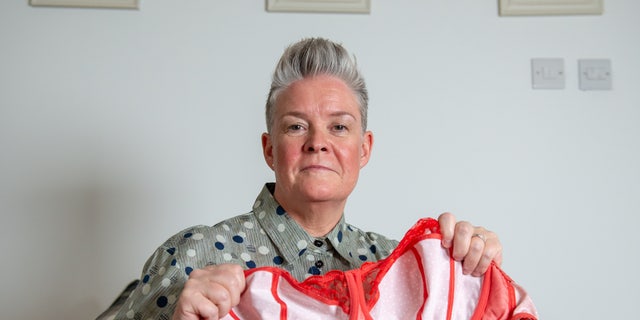 Lynne McConnell says her underwire bras – which she claims were "too tight" – blocked a gland and ultimately caused the cyst to form.
(SWNS)

Though the cyst was only pea-sized at first, McConnell said it grew — causing her pain and ultimately leading to its removal by a surgeon at Brighton’s Park Centre for Breast Care. She was left with a nearly 2-inch wide open wound which took three months to heal. She didn't elaborate on why she wasn't able to receive stitches.

McConnell said the surgeon who removed the growth told her the underwire bras she wore “put pressure on a glad, which blocked [it], and caused the cyst to develop,” SWNS reported.

“It had become particularly uncomfortable to wear a bra and the lump was growing quickly. By the time I went to the breast clinic, it was really painful. I went in at 3 p.m. and left within two hours. The surgeon just cut it out there and then,” she said. 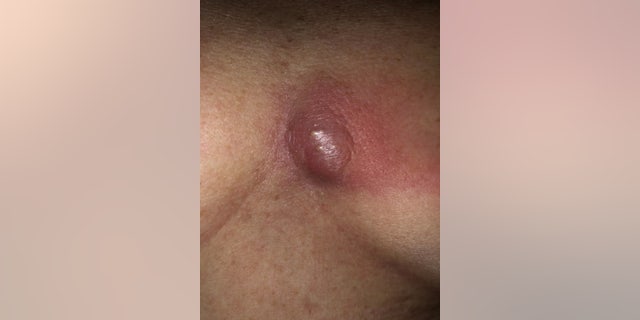 “It was just too tight. I always said it was too tight but they just told me that’s how it should fit. It was uncomfortable but I just listened to them,” McConnell added. “The staff insisted that’s how tight they need to be.”

Adil Sheraz, a dermatologist and spokesperson for British Skin Foundation, told SWNS tight clothes “are known to cause cysts,” which are “sac-like pocket of membranous tissue that contains fluid, air, or other substances” that grow under the skin, per Healthline.

“They are often defined based on their location, for example, pilar cysts often form on the scalp,” he told the outlet. 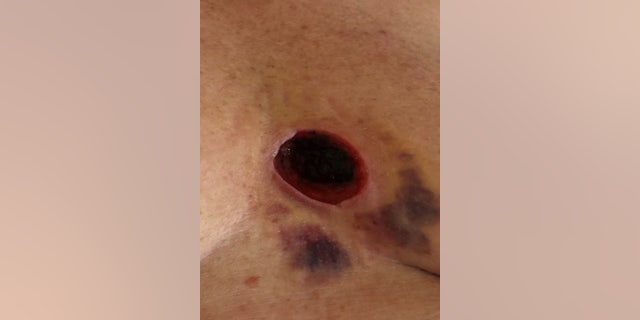 A photo of Lynne McConnell’s chest after surgery.
(SWNS)

Sheraz added: “Cysts can be inherited or acquired. Inherited conditions, such as Gardner's syndrome, can result in multiple cysts. Cysts form when cells start to multiply inwards rather than being shed on the surface. Why some people form cysts is not entirely known. However, they can often be caused by a blockage at the site of a hair follicle opening, as a result of a blocked pore or even injury to the skin.”

MAN IN ITALY WALKS INTO HOSPITAL WITH ARROW THROUGH HEART, SOMEHOW SURVIVES

"Occlusion of pores which may occur from pressure or tight garments could potentially cause the formation of cysts,” he concluded.

McConnell said the cyst was not only painful but affected her self confidence, too.

“Something has clearly gone wrong and all I want is for people to learn from what has happened. I don’t want anyone else to go through what I have. It really affected my self-esteem for a long time,” she said. “I couldn’t wear a bra for weeks and I try to take pride in how I look. It wasn’t nice at all.”