River blindness and elephantiasis are debilitating diseases caused by parasitic worms that infect as many as 150 million people worldwide. They are among the “neglected tropical diseases” for which better treatments are desperately needed. But they were far from the mind of cell biologist William Sullivan when he began studying the microbial parasite Wolbachia, best known for its extraordinary effects on the many insect species it infects.

Sullivan, a professor of molecular, cell, and developmental biology at UC Santa Cruz, has spent much of his career studying the basic biology of the cell cycle in the fruit fly Drosophila. To study the interactions of Wolbachia with its insect hosts, he created a stable cell line of Wolbachia-infected Drosophila cells which he could grow indefinitely in the laboratory. This cell line turned out to be an invaluable tool for researchers seeking new drugs to treat river blindness and related diseases.

That’s because the filarial nematodes that cause these diseases are actually dependent on Wolbachia living within their cells. Kill the Wolbachia, and the worms die.

“The insects would rather not have the Wolbachia infection—it manipulates their reproductive biology and does all these things to promote its own survival. But the worms can’t live without it,” Sullivan said.

Sullivan’s lab worked with the UC Santa Cruz Chemical Screening Center to develop an automated screening assay that could be used to test thousands of compounds for the ability to kill Wolbachia without harming the Drosophila host cells. Sullivan’s team screened nearly 5,000 compounds, of which 40 were active against Wolbachia, including several related to a compound (albendazole) already used to treat filarial nematode infections. Their findings, published in 2012, showed that albendazole and its metabolites target both the worms and the Wolbachia.

Albendazole and other existing treatments all have shortcomings, however, and Sullivan soon realized that he did not have the funding or the resources to pursue the search for better treatments any further. “At that point, we were stuck, because we didn’t have the resources for a full-scale drug discovery effort,” he said.

Then he found out about the California Institute for Biomedical Research (Calibr), a nonprofit organization dedicated to developing medicines for unmet medical needs. With funding from the Bill & Melinda Gates Foundation, Calibr works with external partners, including academic researchers, and provides drug discovery expertise and infrastructure.

Sullivan ended up giving a seminar on his Wolbachia work at Calibr’s facilities in La Jolla, which led to an ongoing collaboration. One of his graduate students, Pamela White, worked with Calibr scientists to train them on the screening assay. Ultimately, Calibr tested more than 300,000 compounds with an optimized version of the assay for high-throughput screening. 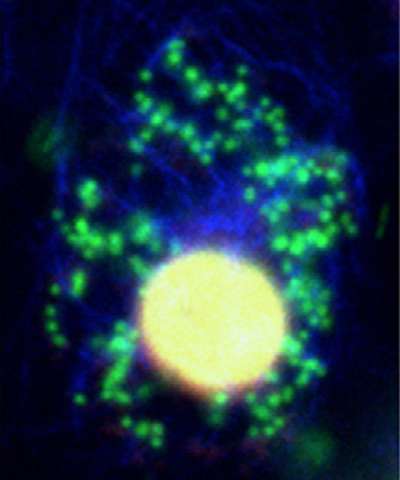 Sullivan’s lab also helped develop a secondary assay for assessing the effectiveness of promising compounds against Wolbachia in filarial nematodes. That was important because the Wolbachia species that infect Drosophila are significantly different from those that infect the worms. “The cell-based assay is not a perfect assay, but it gives you a starting point,” he said.

Using Sullivan’s assays, Calibr has identified a lead compound, improved its performance, and tested it in animals infected with filarial worms. The compound is currently in preclinical development, the stage at which scientists assess safety and tolerability in animal models. If all goes well, the next step will be phase I clinical trials in humans.

“It’s a good example of why we do basic research. You never know where it will lead,” Sullivan said.

He admits that transferring his assays to Calibr felt a little uncomfortable at first. “At the time, I thought of it as my thing. But now that I see what they’ve done with it, I’ve realized that our contribution was part of a much larger effort and this handoff happened at the perfect time,” Sullivan said.

A drug that targets Wolbachia has several advantages over one that targets the worms directly. Research over the past decade has shown that much of the harm caused by filarial nematode infections results from the immune system’s inflammatory response to Wolbachia released by the worms. Eliminating the Wolbachia before the worms die reduces that harmful immune response and leads to a slow death of the worms.

The antibiotic doxycycline has been tested in clinical trials and shown to be an effective treatment for elephantiasis (lymphatic filariasis) when given in daily doses for at least four weeks. But a more potent drug with a shorter course of treatment would be much more practical for use in the developing countries where these diseases are prevalent, Sullivan said.

Meanwhile, Sullivan has begun teaching a course on neglected tropical diseases at UC Santa Cruz. He said the students are amazed to learn how common these diseases are compared to how much research is done on them. “One in six people on this planet suffer from a disease that most people in this country have never heard of,” he said. “It’s been really eye-opening, for me and for the students.”

Sullivan’s lab has also continued to study Wolbachia infections in Drosophila, returning to the project for which the infected cell line was initially created. Using the same automated screening assay used in the drug discovery project, Sullivan’s team screened the Drosophila genome to find genes that either suppress or increase the proliferation of Wolbachia in host cells. The study, published in 2017, identified several key biological pathways that Wolbachia alters in host cells to maintain infections. The findings may explain why Wolbachia infection makes insects resistant to RNA viruses, a feature that is now being exploited in efforts to combat the spread of Zika, dengue, and other mosquito-transmitted diseases.

Vitamin B12 toxicity: Symptoms on the face to spot warning you may have taken too much