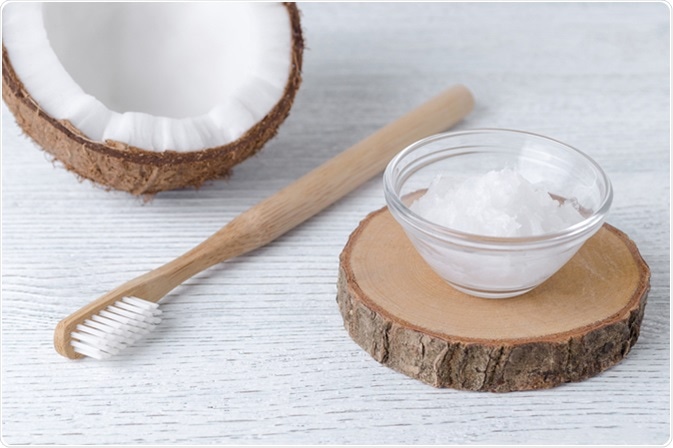 Various oral health care products and mouthwashes are available in the market for maintaining oral hygiene; however, the chemical composition of these products does pose certain adverse effects on the body. Recently, coconut oil pulling is regaining its importance primarily due to its natural properties with nil side effects.

Oil pulling stems from the ancient Indian treatment therapy also referred to as kavala or gundusha. During this procedure, swishing is done with a tablespoon of oil such as coconut oil. This is usually done empty stomach for around 20 minutes during early morning hours. As soon as the oil turns thin and milky after swishing, it is spitted out.

Two ancient ayurvedic books named Charak Samhita and Sushruta Samhita as ‘Kavala Graha’ or ‘Kavala Gandoosha’ have highlighted the importance of oil pulling. TheGandoosha technique fills the mouth completely with the oil, whereas in Kavala Graha technique, an appropriate amount of oil is filled so that it can be swirled in the mouth.

Properties of Coconut Oil and Mechanism of Action

Coconut oil has certain distinctive properties primarily because it is composed of medium chain fatty acids. These medium chain fatty acids are composed of 45 to 50 percent of lauric acid. Lauric Acid has reactive properties with alkaline saliva. Soon after pulling lauric acid reacts with the alkalis such as sodium hydroxide and bicarbonates leading to sodium laureate, which is soap-like matter. This soap like substance minimizes the chances of sticking and accumulation of plaque and also has an overall cleansing action. Lauric acid also has unique anti-inflammatory and anti-microbial properties. The antimicrobial property helps in fighting against oral microorganisms (or bacteria) such as Streptococcus mutansand Candida albicans. These bacteria result in plaque formation and are the causative factor of many dental problems such as dental caries, gingivitis, periodontitis, and bad breath.

Coconut oil is an organic oil and yields great benefits especially if it is cold pressed. Trans fats are usually absent in cold pressed oils and traditionally coconut oil is amongst one of such oils which is cold pressed and is used for oil pulling. Also, coconut oil releases certain antioxidants which can rupture the cell wall of microorganisms and destroys them. The lipid layer of bacteria gets attracted to the oil leading to entrapment of bacteria.

Oil pulling also results in emulsification which leads to the increase in surface area of the oil. The process of emulsification starts after 5 mins of oil pulling. This process leads to the coating of the outer most layers of teeth and gingiva, thereby preventing bacterial accumulation and plaque formation.

Oil pulling has shown excellent benefits in the reversal of periodontal concerns, wherein the regular oil pulling led to the reversal of the bleeding gum problems. With regular pulling, the gums gradually turned pink and healthy. A study conducted on 60 adolescents of aged 16–18 years who suffered from gingivitis due to plaque formation showed great improvement in their periodontal health after regular coconut oil pulling. During the study, Modified Gingival Index and plaque index were measured on regular intervals, which revealed a gradual decline in plaque and gingival indices post 30 days of oil pulling. These results were at par with the conventional mouthwashes available in the market. Results of the study showed that coconut oil pulling significantly improved gingivitis.

Monolaurin present in coconut oil has an exceptional mechanism of killing certain oral microorganisms such as Staphylococcus aureus, Candidaspp., Helicobacter pylori, Escherichia vulneris, and Enterobacter spp. It is believed that monolaurin results in bacterial death by changing the bacterial cell wall, causing the destruction of bacterial cell membranes and hampers enzymes linked to energy production and nutrient transport to bacteria. Monolaurin also has virucidal properties which cause virus destruction.
Other suggested benefits of oil pulling include:

Besides the above-mentioned benefits oil pulling also aids in strengthening of the muscles of the oral cavityand makes jaw bones stronger. Unlike conventional mouthwashes coconut oil does not cause tooth staining with regular usage.

Akshima is a registered dentist and seasoned medical writer from Dharamshala, India. Akshima is actively involved in educating people about the importance of good dental health. She examines patients and lends free counseling sessions. Taking her passion for medical writing ahead, her aim is to educate the masses about the value of good oral health.

A new strategy for the management of inflammatory pain

COVID-19 in the radiology department: What radiographers need to know

Arthritis diet: The 90p juice that can help to reduce painful arthritis symptoms

Baby No. 4? Blake Lively Jokes With Ryan Reynolds About Getting Pregnant

Deaths from falls among older Americans are on the rise