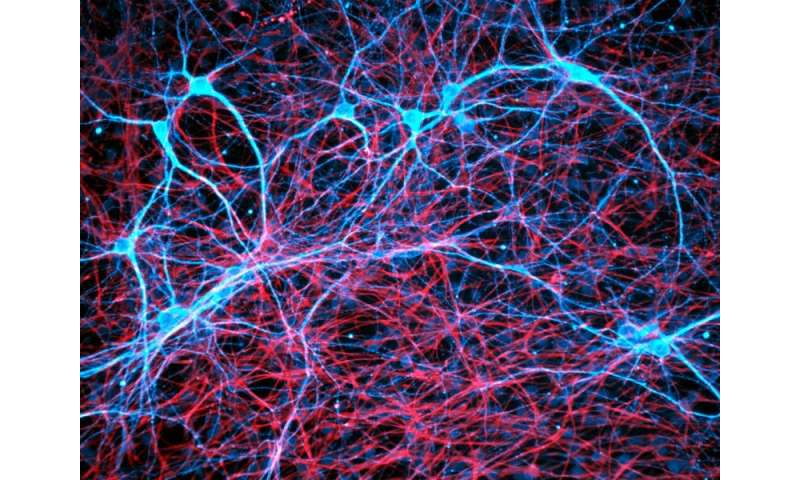 Neurons transmit their signals to each other via synapses, fine cell projections with terminals that contact another neuron. Researchers and physicians at Heidelberg University Hospital, Heidelberg Medical Faculty, and the German Cancer Research Center (DKFZ) have now discovered that neurons in the brain form these kinds of direct cell-to-cell contacts with tumor cells of aggressive glioblastomas, as well, thus transmitting impulses to the cancer cells. The tumor benefits from this “input”: The activation signals are probably a driving force behind the tumor growth and the invasion of healthy brain tissue by tumor cells, as Frank Winkler, Thomas Kuner and their teams discovered using special imaging methods. But there is also some good news: Certain substances can block the signal transmission in animal experiments. The results have just been published online in the journal Nature.

Networks of neurons and tumor cells

Glioblastomas invade the healthy brain in a diffuse pattern like a fungal network. As a result, they cannot be completely removed by surgery, and they also survive intensive chemotherapy and radiotherapy. Glioblastomas are thus among the most dangerous tumors in humans; the average survival time is 15 months following the initial diagnosis.

In 2015, the team led by Frank Winkler, head of the Research Group Experimental Neurooncology in the Clinical Cooperation Unit Neurooncology, discovered a cause of this resistance to treatment: The glioblastoma cells are connected to one another through long cell protrusions. They communicate through these connections, exchange substances that are relevant for their survival, and thus protect themselves from treatment-related damage. The current findings add a further piece of the puzzle to our understanding of this type of cancer: “The tumor cells are not only interconnected in the brain like neurons; they also receive direct signals from them,” explained Winkler, whose research group is affiliated with the University Hospital and the DKFZ.

The researchers observed the growth of human glioblastomas that they had transferred to mice, and studied cell cultures with human neurons and tumor cells, and tissue samples from patients. To do so, they used a wide range of modern microscopy methods, which provide detailed three-dimensional images of the connections—only micrometers large—between neurons and tumor cells as well as showing their molecular structure and signals within the cells. Electrical recordings from tumor cells revealed electrical currents generating from the synaptic connections, which form the starting point for further processing of these signals in the tumor cells. “We were able to show that signal transmission from neurons to tumor cells does in fact work like stimulating synapses between the neurons themselves,” added Thomas Kuner, director of the Department of Functional Neuroanatomy at the Institute for Anatomy and Cell Biology, where the synaptic connections were first discovered by Varun Venkataramani. “This project began with an observation in basic research. In close cooperation with our clinical partners, it has led to conceptually new insights which will allow new treatment approaches to be developed using targeted translational research.”

How exactly activation of the tumor cell ultimately leads to increased tumor growth and invasion of healthy areas of the brain by the glioma cells has yet to be clarified. It is clear that this mechanism can be blocked in animals, however. Possible methods include a significant reduction of brain activity (for example under general anesthesia), pharmacological interventions that interrupt binding of the neurotransmitters on the AMPA receptor, or blocking the AMPA receptor using genetic engineering. In all these cases, tumor spread became slower in animal experiments. “This mechanism is therefore an extremely interesting approach for drug development and future drug treatments,” neurooncologist Winkler emphasized. “Suitable substances have in fact already been approved that block the AMPA receptor and are used to treat other neurological diseases. These substances are promising candidates for clinical trials.”

“The new results not only show what makes glioblastomas so aggressive, but also how they could be stopped. That is highly relevant from a translational point of view and paves the way for clinical studies,” commented Wolfgang Wick, medical director of the Neurology Department at Heidelberg University Hospital.

Hepatitis B vaccine: Safety and side effects