What happens when the demon king Ravana refuses to die, right in the middle of the Ramlila, even pounding Rama on the head onstage?

On that very last night, towards the end of the very final performance, suddenly, just before the tabla player can begin his final drum roll to the play’s climax, from out of the darkness, and travelling like a ghoul over everyone’s heads there comes A BLOOD-CURDLING SCREAM!

The four sitting in the front row gasp aloud.

As do the rest of the audience of over six thousand people, many of who are outsiders—business folk, who have come to trade in sugar, cotton or brass utensils.

Can it be real?

Or are they all imagining it?

Something entirely unfortunate, problematic and very inappropriate is happening on stage.

King Ravana, it seems, is threatening to change the very climax of the Ramayana!

For just as Sita is about to be rescued by Lord Rama, Ravana wakes up from where he lay dead and resumes his attack!

For the present, no one knows how to react.

In the midst of battle cries, flashing lights and rolling war drums, Jitu gives Muru a horrified stare, like he has just seen a ghost!

He is shocked to see King Ravana, all charged up, leap to his feet like someone possessed, face black as thunder, and start fighting all over again when he is supposed to be positively, definitely, downright DEAD!

No one is looking any longer at Lord Rama. Every eye inside the sugar mill is on Ravana. For suddenly, it seems like this fiend is in a hundred places all at once, those ten heads snapping and snarling, scowling and growling. Like some fearsome painted puppet come free of its strings. Chippa and Chipkili sit hooked, speared to their seats, like pondfish. Even Rama’s glares do not stop the Demon King in his tracks. Instead, he swears aloud and shakes his fist in the air.

Chippa’s heart skips a beat as the villain begins to circle the hero. He can hear Ravana’s blood boil in his ears. He can feel the earth tremble as Ravana approaches Rama, closing in like a coil of rope, heaving his mace over that barrel chest with those muscled shoulders. He desperately wants to cry out, ‘Move! Just move, O Prince. He’s coming for you. Can’t you see?’

But his mouth is too dry, his tongue powerless and in shock. While his hands scamper like scared mice all over his face, smudging the twirling moustache that had been pencilled specially for tonight’s performance.

Then, with a ferocious roar that shakes the very foundations of the stage, Ravana begins to pound Rama on the head. Rama’s bow bounces to the ground with a loud clank.

Chipkili closes her eyes and turns away.

It now becomes very clear that Ravana refuses to die.

If Ravana does not die, how will there be a victory of Good over Evil? How will Lord Rama get back Sita and return to Ayodhya?

Then, A Chilling Realisation.

How could the play end?

This is now on everyone’s mind. All six thousand members of the audience, as they sit transfixed. Eyes on Ravana. Who has risen from the dead. Upstaged his rival. And has made it quite clear he does not wish to go back. 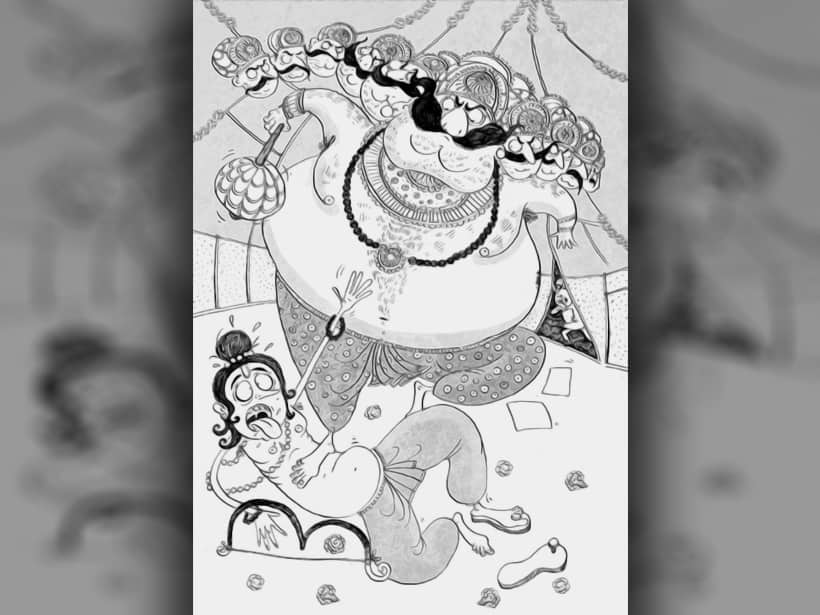 NOT OVER HIS DEAD BODY!

The atmosphere is charged. Like the hissing tail of a firebomb.

Rama’s face becomes white as a chalk stick. He has fallen on the floor where he lies forlorn as a rag. Even his stage whisper—‘For goodness’ sake! Die, please die!’ (which everyone hears!)—does not work.

The audience stares in horrified disbelief. The situation on stage is clearly out of control. A murmur of fear like some shadowy spectre moves around the crowd. Eyes widen to saucers.

Finally, from the audience, a group of policemen, led by the able Senior Superintendent of Police, Mr Ricky (Ravinder) Singh, jump onto the stage. Blowing whistles, they have come to rescue the Lord from his difficulty.

People are standing up. Everyone is clapping. There is still hope. Some are cheering Rama. Others are booing Ravana. They begin pelting him with peanuts. Whistles screech. Taunts are tossed. Threats get hurled. In the rush to accost the Demon King, the steps to the stage collapse.

People crash and fall on top of each other. Some jump rails to the nearby VIP area. Which causes panic among those seated there, forcing them to make a hasty exit and put as much distance, as quickly as possible, from whatever it was erupting around them.

Muru grips Jitu’s arm, giving it a squeeze. They watch as a whole row of people are forced to stand, making room for a very fat man leaving in a huff with two swaggering bodyguards. They recognise Sethji Yadav, the rich moneylender.

Somewhere at the back, a riot breaks out. People run here, there and everywhere. Ravana is arrested on the spot and dragged off stage. And the management has to hastily bring the curtain down.

For a moment or two, there is a hushed silence. All ears in the audience stretch and strain to catch what’s going to happen next. From behind the curtain, out of public view, they overhear a very angry voice carry through the oldfashioned public address system.

it shouts, so loudly that the microphone picks up every word (even the sound of flying spit!) and booms it over the audience’s heads.

‘I’LL SHOW YOU WHAT A REAL-LIFE VILLAIN WITH A FIFTY-SIX INCH CHEST CAN DO SINCE YOU YOURSELVES HAVE CAST ME IN THE ROLE.’

Chipkili plugs her ears because the ringing feedback enters her eardrums and makes an unbearable din.

‘YOU OWE ME FOR LAST YEAR’S PERFORMANCE. FIRST CLEAR MY DUES WITH INTEREST. YOU HEAR ME? THEN ONLY I’LL DIE.’

The Shri Ram Leela Committee, from behind heavy velvet drapes that do nothing to muffle the showdown, dithers. Naturally, they are all jumpy and jittery with stage fright.

Also Read| Short story: The birth of Durga and battle with Mahishasur

‘SHOW ME MY MONEY THIS MINUTE, OR ELSE I’LL CARRY ON MY FIGHT FOR JUSTICE IN FRONT OF EVERYONE!’

‘Singh-channa. Garam. Garam. Lay lo!’ they yell at the tops of their voices. Bored customers, waiting for the show to start, launch paper rockets made by folding their cone-shaped channa packets.

Finally, the Demon King is released from his handcuffs, the backstage bargaining having ended in a settlement. Ravana, very pleased, unclogs some betelnut juice from his throat into the microphone and the microphone unclogs it into the audience.

Three blasts from a conch shell, and the play resumes. Ravana jumps back on stage to thunderous uproar and after two cartwheels, lies down, dead.

By the time the towering effigy behind the open-air stage starts to crackle and burst, showering rockets and spitting noisy bombs over the audience, everyone’s worst fears are laid to rest. One by one, the ten heads of Ravana come tearing off as bursting firewheels and King Kong

Bombs carry them away into the darkness.

Everybody is overjoyed that the play is saved. Rama can head home to Ayodhya and the audience, assured that Dussehra has come, to their beds.

(Extracted with permission from the book Ravana Refuses to Die by Rustom Dadachanji, illustrated by Priya Kuriyan, published by Duckbill.)

People are being ‘misled’ into thinking honey is healthier than sugar