Helping hand from Downton creator on my luvvie night out: BONNIE ESTRIDGE on how Alzheimer’s is portrayed in the media

It has been quite a month. My daughters, Hannah and Suzy, both in their 30s now, and I have just come back from a mainly glorious five days in Poland.

I’ve always wanted to visit Warsaw, where my father David grew up. I mentioned it to the girls and they suggested we go on a girls’ weekend.

It’s the first time I’ve been away with them since they were teenagers. The big difference is that they did all the organising: booking the flights, the Airbnb, everything. Did I mind not being in the driving seat? Not a bit. I loved it.

The trip itself was a bit more sombre than our annual family holidays to Marbella when they were little – as visiting Auschwitz was on the agenda. Aside from that, we had a fantastic time and walked and talked lots. 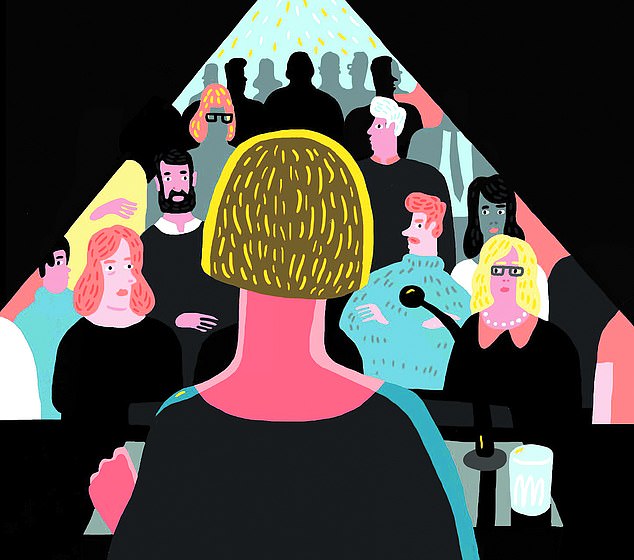 In my last column, I wrote about the time recently when I got lost on the way to the dentist – a trip I’ve done hundreds of times. It was horrible, and I was touched by all the letters and emails I received from readers sharing similar stories and sympathy.

I’ve become resigned to the fact that, thanks to the A-Word, my comfort zone – in terms of where I can go and what I can do on my own – is getting smaller.

I don’t think that I’d have been able to go to Poland alone, for instance. But with the girls, it was a pleasure. I loved every moment with them.

And speaking of comfort zones, I did well and truly step outside mine a few weeks ago when I agreed to give a speech at a Channel 4 event in London, organised in conjunction with the Alzheimer’s Society.

The theme of the day was: Do you think that Alzheimer’s is portrayed correctly in the media?

My long-suffering husband Chris was my ‘plus one’, and when we arrived we couldn’t believe the number of celebrities milling around: Downton Abbey’s Hugh Bonneville, Hugh Dennis from the comedy TV show Outnumbered, John Middleton of ITV’s Emmerdale and actress Linda Marlowe, who played Sylvie Carter, a character with dementia in EastEnders. 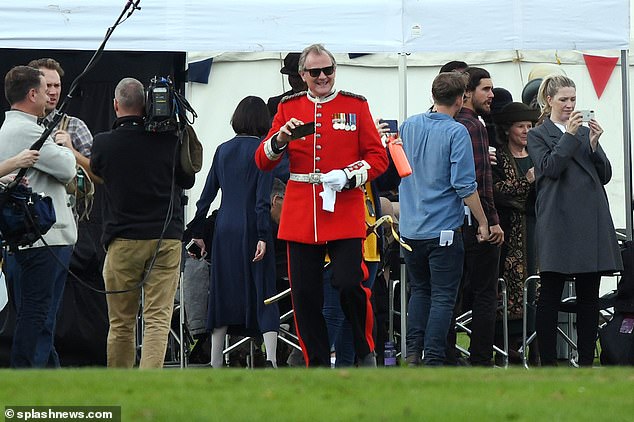 It was great: my day with the luvvies (I hope if any of them are reading this, they aren’t offended by being called that).

Downton Abbey writer Sir Julian Fellowes was speaking on the panel, and sat next to me. Undoubtedly sensing just how terrified I am of public speaking, something I have never enjoyed, he held my hand, which helped.

And, despite my jitters – my mind went totally blank when it came to answering questions, and I clammed up – I got to say my bit: the more we are able to shine a light on this horrible condition, then the more awareness there will be, and hopefully more funding for research too.

There have been a few films I’ve seen recently which feature people with dementia.

Still Alice, in which Julianne Moore portrays a fictional language professor who is slowly succumbing to Alzheimer’s, pleasantly surprised me.

I would go as far as to say it was utterly true to life. 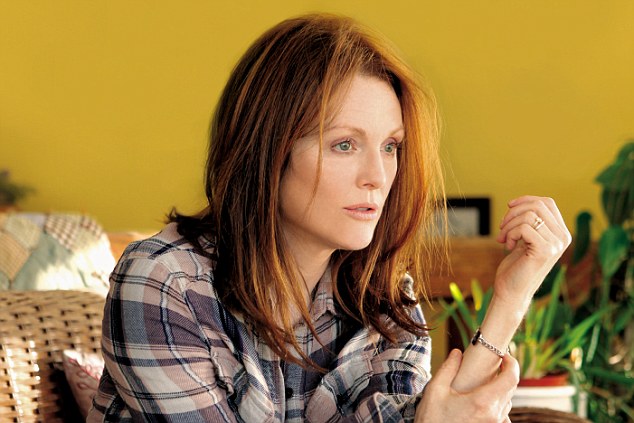 Julianne Moore starring as Alice Howland in Still Alice. The film follows a fictional language professor who is slowly succumbing to Alzheimer’s

I was pretty sure that Chris completely identified with the situation: tears, anger, misunderstandings but sometimes even laughter make the portrayals of all the characters in this film absolutely spot-on.

Still Alice is certainly a tear-jerker and I’m sure that anyone who has ventured into the cinema to see it cannot fail to be moved.

More recently, there was The Leisure Seeker, which felt a little less realistic to me.

Helen Mirren and Donald Sutherland star as John and Ella Spencer, an American couple in their 80s who take a road trip. John has early dementia, and Ella has cancer.

Given my own difficulty in finding the dentist recently, I found it hard to believe he’d be up for driving more than 1,600 miles down the US east coast.

But all in all, I think it’s good that these films are getting made. They show, as I always say, that this disease is a bugger, but life goes on.

The best we A-Word folk can do is simply to get on with it, and try to enjoy what’s out there. And for me, well, that means now I’m off to my regular evening Zumba class with my good friend Liz.

Share your experiences with Bonnie at [email protected] or write to her at Health Desk, The Mail on Sunday, Northcliffe House, 2 Derry Street, London W8 STT

Why smokers are thrice more prone to chronic back pain

Reese Witherspoon Is Damn Proud Of Her Grey Hair

How to Treat Bull Dog Acne at Home

What If You Were Your Own Blood Donor for Surgery?