Feeding peanuts to some babies from as early as three months could protect them from developing allergies, scientists say.

Current guidelines say babies should be fed nothing but breastmilk until six months – and only then should solid foods be introduced.

Mothers of high-risk babies, those with eczema or are sensitive to certain foods, took part in the study.

They were asked to feed their children small amounts of allergenic foods, including peanuts and eggs, from either three or six months of age.

Results showed the risk of developing a peanut allergy was more than halved among youngsters given peanut butter at the early age.

And the chances of an egg allergy were reduced by half, compared to babies who were introduced to eggs at the NHS recommended time of six months. 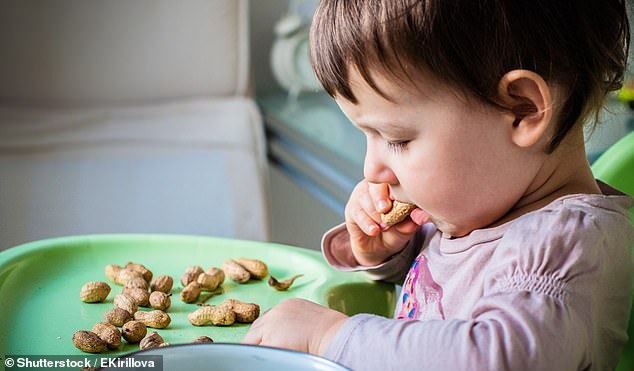 A diet with peanuts and eggs can prevent food allergies in high-risk babies, scientists say. Those introduced to the foods at three months old had a lower chance of getting an allergy than babies introduced at six months (stock)

In theory, it could curb the number of children who get allergies, the researchers at King’s College London and St George’s, University of London said.

Figures suggest one in 40 youngsters will develop a peanut allergy and one in 20 will be struck down with an egg allergy.

Both are potentially life-threatening conditions, with peanut allergies being the most common cause of food allergy deaths.

More than 1,300 three-month-old babies from England and Wales were involved in the study. They were tracked over three years.

In the controlled trials, the babies were tested for existing allergies before being randomly split into two groups.

The Early Introduction Group (EIG) was asked to introduce six allergenic foods from the age of three months alongside continued breastfeeding.

These foods were eggs, peanuts and fish, which are the most common food allergies – along with milk, wheat, and sesame.

WHAT ARE THE MOST COMMON ALLERGIES?

In children, the foods that most commonly cause an allergic reaction are milk, eggs, peanuts, tree nuts, such as walnuts, brazil nuts, almonds and hazelnuts, fish and shellfish, such as crab, lobster and prawns.

In adults, the foods that most commonly cause an allergic reaction are peanuts, tree nuts, fruits, such as apples and peaches, fish, shellfish.

It’s still unknown why people develop allergies to food, although they often have other allergic conditions, such as asthma, hay fever and eczema.

Most children who have food allergies to milk, eggs, soya and wheat in early life will grow out of it by the time they start school.

Peanut and tree nut allergies are usually more persistent. An estimated four out of five children with peanut allergies remain allergic to peanuts for the rest of their lives.

Food allergies that develop during adulthood, or persist into adulthood, are likely to be lifelong allergies.

Both groups were then tracked to see if they developed any long-term allergies to those foods between the ages of one and three years old.

Just 19.2 per cent of babies at high-risk of a peanut allergy developed the condition in the EIG. In comparison, the rate was 33.3 per cent in the SIG.

According to the researchers, the results were ‘still evident’ even if the diets weren’t stuck to religiously.

Only 223 of 529 children (42 per cent) in the EIG group strictly followed the early introduction regime of consuming three grams of allergen protein per week.

But among those who were not at high risk, the early introduction of allergenic food made no difference to whether they developed a food allergy.

Dr Michael Perkin, co-author, from St Georges, said: ‘Our research adds to the body of evidence that early introduction of allergenic foods may play a significant role in curbing the allergy epidemic.’

The UK has some of the highest prevalence rates of allergic conditions in the world, with over 20 per cent of the population affected, according to Allergy UK.

In the 20 years running up to 2012 there was a 615 per cent increase in the rate of hospital admissions for anaphylaxis – a serious allergic reaction.

There are around ten deaths related to food allergies in England and Wales each year, according to the NHS.

The latest research suggests current guidelines for babies at risk of allergies may need changing, the researchers said.

Exclusive breastfeeding or first infant formula is recommended for around the first six months of life, with small amounts of solid foods introduced after that.

Amena Warner, of Allergy UK, said: ‘Exclusions would be if an infant had a reaction to a food, then they would exclude this food until investigated.

‘As there is no current specific guidance on introducing allergenic food parents will often introduce these type of foods last.

‘This research is telling us that this is too late as the infant may have developed sensitivity to that food and have an allergic reaction from eating it.’

‘And [they] are informative when it comes to infant feeding recommendations concerning allergies and the development of new guidelines.’

The research is published in a series of papers in the Journal of Allergy and Clinical Immunology.

Increased violence and suicidal thoughts characterized in study of men

Wealthier people do less in the struggle against climate change