Girl, 12, turned ‘into a baby again’ and lost her ability to walk and talk after being struck down with a brain-swelling virus she caught ‘while paddle boarding on a school trip’

A girl turned ‘into a baby again’ after she was struck down with a brain-swelling virus she caught on a school trip.

Ffion Westwater, from Merthyr Tydfil, started to feel unwell and had the shivers when she returned from a three-day outdoor activity trip in July 2018.

Her parents initially put her symptoms down to a cold but a couple of days later the now 12-year-old began vomiting and suffering severe headaches.

Tests at hospital revealed Ffion had encephalitis, a life-threatening condition which occurs when the brain becomes swollen. It can affect breathing and circulation.

Ffion lost the ability to walk, talk and eat by herself. Her parents said she became a ‘rag doll’ who wasn’t even able to give direct eye contact.

Doctors said she may never regain her independence – but after months of intensive therapy, she slowly did. Ffion is now back at school but it’s unclear if she will make a full recovery.

The serious condition can having lasting complications including seizures, memory problems and personality changes. 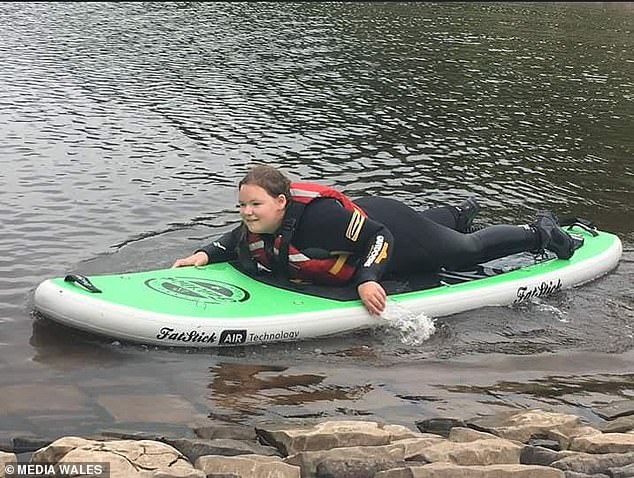 Ffion Westwater, from Merthyr Tydfil, returned from her school trip at Dolygaer Outdoor Education Centre (pictured) and felt unwell. Two days later she was vomiting and had headaches 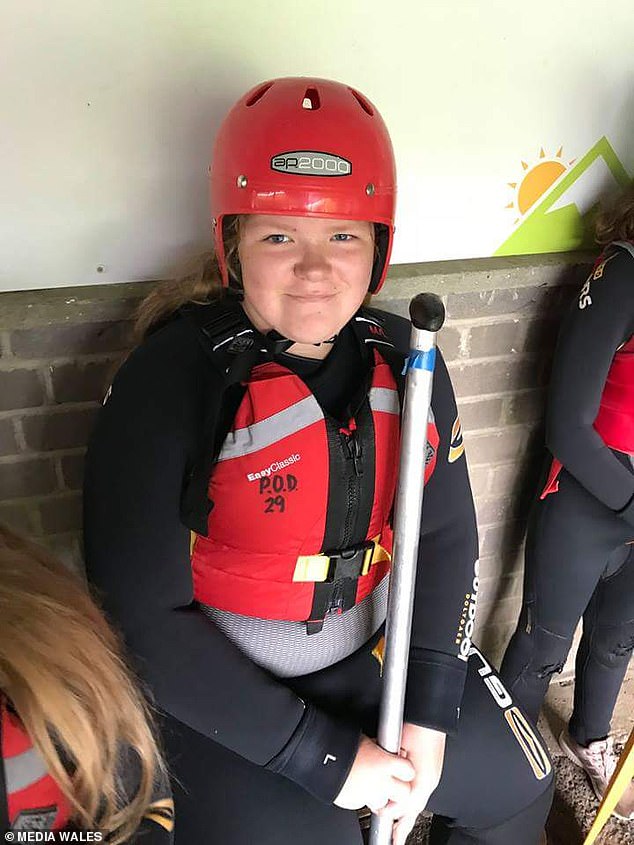 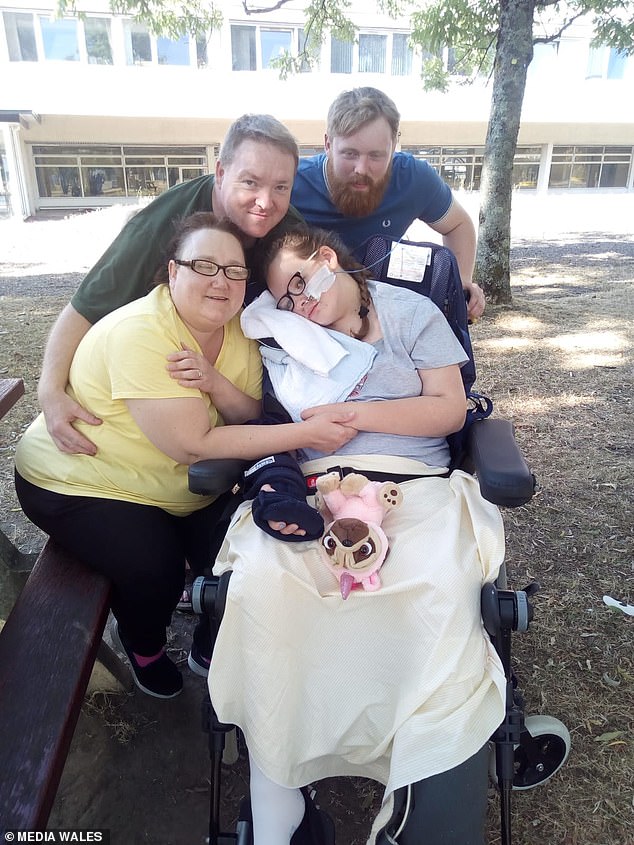 Ffion lost the ability to walk, talk and eat by herself due to encephalitis. She is pictured with her mother, Leigh, 43, Father, James, 45, and brother, Ewan, 23

Ffion’s mother Leigh, 43, said: ‘It was like having a newborn again, but you couldn’t pick her up as she was too big.

‘She couldn’t swallow and needed a feeding tube, she couldn’t move her right side and she couldn’t give me any direct eye contact. She was like a rag doll. It was horrendous.’

Encephalitis can be caused by several common viruses such as herpes – the cause of coldsores and chickenpox – spreading to the brain.

It may also be a problem with the immune system, whereby it mistakenly attacks the brain, causing it to become inflamed.

It is not clear what virus Ffion had. In some cases, the true cause of the condition never becomes clear.

After Ffion returned from her school trip at Dolygaer Outdoor Education Centre and felt unwell, her parents were advised by their GP to visit A&E at Prince Charles Hospital in Merthyr Tydfil.

Doctors diagnosed her with the stomach condition gastroenteritis and sent her home to rest.

But Ffion’s condition continued to worsen and she was back in the emergency unit just days later.

A CT scan at Prince Charles, followed by further tests at the University Hospital of Wales in Cardiff, revealed she had encephalitis.

The condition affects up to 6,000 people in the UK each year. There were around 250,000 patients admitted to hospital in the US with encephalitis in the last decade, according to Encephalitis Society. 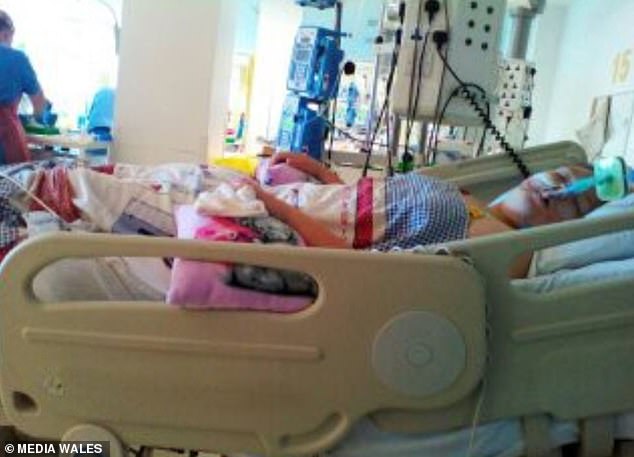 Ffion spent four months in hospital with the life-threatening condition. Her father, James Westwater, 45, said: ‘Our daughter was there physically but there was nothing else’ 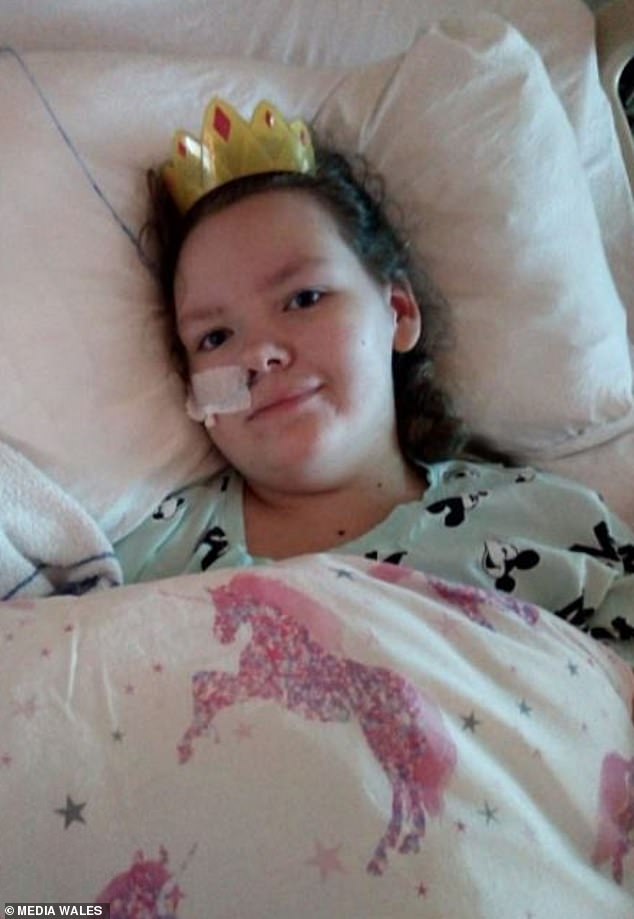 Ffion was given a rigorous 12-week neurorehabilitation programme which included physiotherapy, occupational health and speech and language therapy

Encephalitis is an uncommon but serious condition in which the brain becomes inflamed (swollen).

It can be life-threatening and requires urgent treatment in hospital.

Anyone can be affected, but the very young and very old are most at risk.

Encephalitis sometimes starts off with flu-like symptoms, such as a high temperature and headache, but these don’t always occur.

More serious symptoms develop over hours, days or weeks, including: confusion or disorientation, seizures (fits), changes in personality and behaviour or loss of consciousness.

Dial 999 for an ambulance immediately if you or someone else has these more serious symptoms.

It’s not always clear what causes encephalitis, but it can be caused by viral infections. Several common viruses can spread to the brain and cause encephalitis in rare cases, including the herpes simplex virus (which causes cold sores and genital herpes) and the chickenpox virus.

She had lost all her independence. Encephalitis leads to damage of nerve cells in the brain, either by the infection or inflammation. The swelling can push downwards onto the brainstem – the part of the brain that controls vital functions like movement.

Ffion’s father, James, 45, said: ‘Our daughter was there physically which, after what she’d been through, was a huge relief, but there was nothing else.

‘She would wake and be put in her chair and that’s how she’d stay all day, void of any expression, just staring in to space.’

A week after Ffion was struck down with encephalitis, Mrs Westwater was diagnosed with non-Hodgkin’s lymphoma, a type of blood cancer.

She said: ‘I was on autopilot. I couldn’t even think about myself. I just had to get on with it and be there for Ffion.

‘Even though Ffion was not outwardly responding to us, she could still hear things we said, so I kept my cancer diagnosis from her.’

Mrs Westwater needed six months of chemotherapy while simultaneously caring for her daughter. She is now in remission.

Six weeks after arriving on the Jungle Ward at the children’s hospital, Mr and Mrs Westwater were taken aside and told by doctors that Ffion’s condition may never improve.

But one afternoon Mrs Westwater noticed that Ffion’s eyes were tracking her across the room, something she’d been unable to do since the diagnosis.

She started reacting to her surroundings and began mouthing words a few days later.

Mrs Westwater said: ‘I’ll never forget walking onto the ward that Sunday morning and seeing the excitement on the nurses’ faces.

‘They couldn’t wait to tell us that randomly, in the middle of the night, Ffion had started shouting for the TV to be put on.’

Despite the huge improvements in Ffion, the once independent and active schoolgirl still had a difficult journey ahead of her. 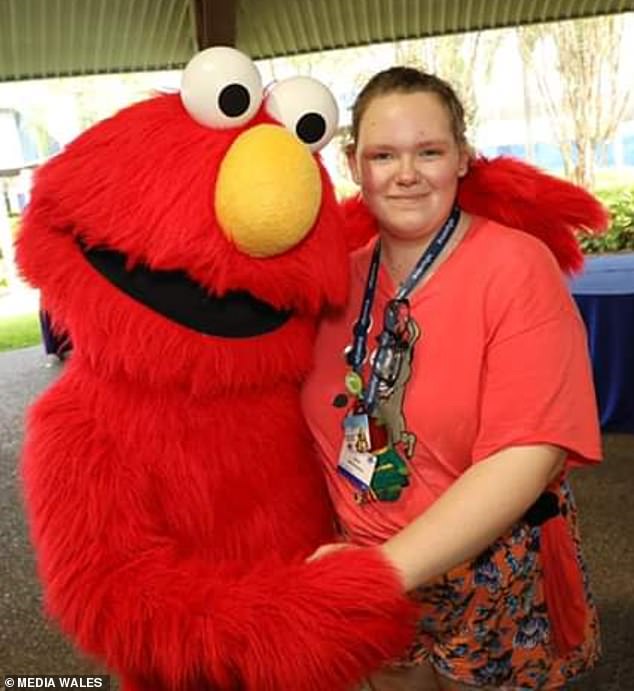 Doctors said Ffion may never regain her independence – but after months of intensive therapy, she slowly did. Ffion (pictured before her ordeal) is back at school but it’s unclear if she will make a full recovery because the condition has long-lasting effects 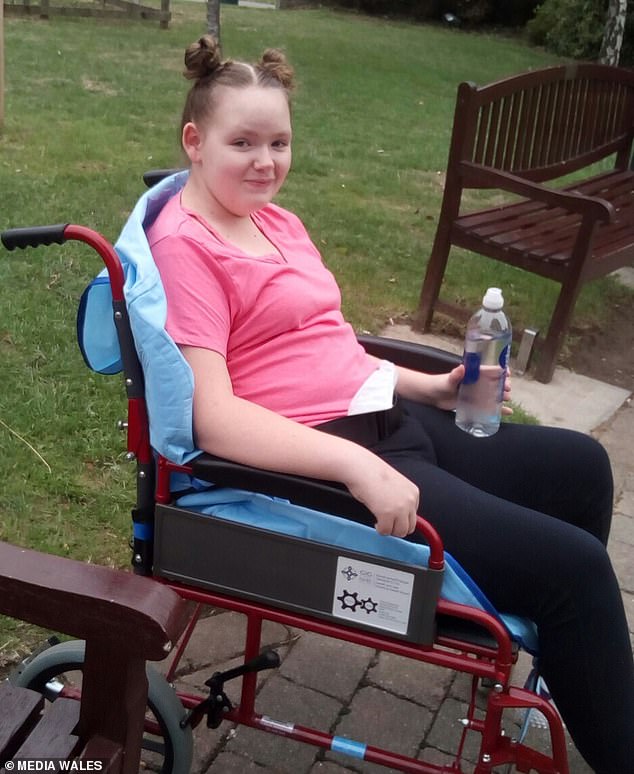 Ffion, pictured while recovering, is improving all the time, her parents said. They hope to raise £1million for the Jungle Ward where she was cared for

She began a 12-week neurorehabilitation programme which included physiotherapy, occupational health and speech and language therapy.

With that support, Ffion slowly began to regain her speech and movement and, with it, a bit of her independence.

Mrs Westwater said: ‘The neurorehab team were brilliant. They spent time with Ffion in the hydrotherapy pool, taught her to navigate steps and pavements in the garden and even took her to the local fruit stall to practice her life skills.

‘She had everything thrown at her in that 12 weeks but she took it all in her stride.’

After four months on the Jungle Ward at the Noah’s Ark Children’s Hospital for Wales, Ffion was finally able to go home.

Mr and Mrs Westwater, who also have a 23-year-old son called Ewan, admit it is impossible to say whether Ffion will make a full recovery.

But she is continuing to make progress all the time and is now back studying at Cyfarthfa High School with one-to-one support.

They are now backing a campaign which aims to raise £1million for the Jungle Ward to improve its environment and facilities.

Mr Westwater said: ‘We can’t fault the care Ffion received while she was on Jungle Ward and the staff there do a great job with what they have.

‘But for us and many of the other families there, the stays are long and difficult. Having new equipment and facilities through the Jungle Ward Appeal will help make life so much better during massively difficult times.

‘It’s a world we knew nothing about before last year but we unfortunately know now that neurological injuries like Ffion’s can be devastating and take a huge amount of specialist intervention to treat.

‘We’re delighted that through this appeal, Jungle Ward will soon have purpose-built rehabilitation facilities that will give children like our daughter the best possible chance at a normal life again.’

Supplements: The immunity-boosting supplement found to raise risk of cancer by up to 20%