Teenager who triumphed over cancer: Girl, 16, who missed three years of school battling disease sits her GCSE exams and is voted prom queen by classmates at her end-of-school ball

A girl who missed three years of high school because she was fighting a rare form of leukaemia was voted prom queen by her classmates at her end-of-school ball.

Charlotte Jennings, 16, went through gruelling chemotherapy and a bone marrow transplant to overcome the deadly disease.

But, incredibly, she summoned the strength to sit her GCSE exams alongside her classmates and went to their end of school prom this year.

Charlotte, from Stockport in Manchester, struggled with acute myeloid leukaemia, a type of blood cancer which affects only around four in every 100,000 people.

She was diagnosed when just 11, even though the disease usually affects older people, and immediately needed more than four months of chemotherapy.

Now in remission from the cancer, Charlotte lost her hair and was left disabled by her treatment, and will need joint replacement surgery in the future.

However, she says going to the prom with the help of a children’s charity made her feel like other girls her age, an experience she missed out on for most of her school life. 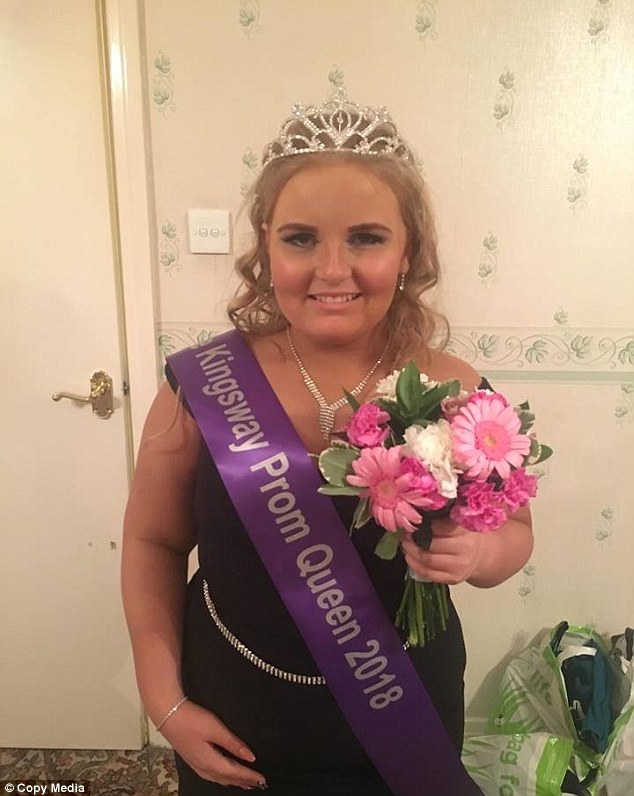 Charlotte Jenkins, 16, was voted prom queen by her classmates after enduring years of devastating cancer treatment

Despite her bone marrow transplant and months of gruelling treatment, the brave teenager worked so hard she managed to catch up on all her studies and sit her GCSE exams.

And now Charlotte has achieved her final year 11 goal by celebrating the end of her exams at the school prom and being voted Prom Queen.

Posing for photos with her friends from Kingsway School in Cheadle, she dressed up in a long black gown.

She was nominated for the Cinderella Project which helps young cancer patients in the Greater Manchester area to be the belle of the ball. 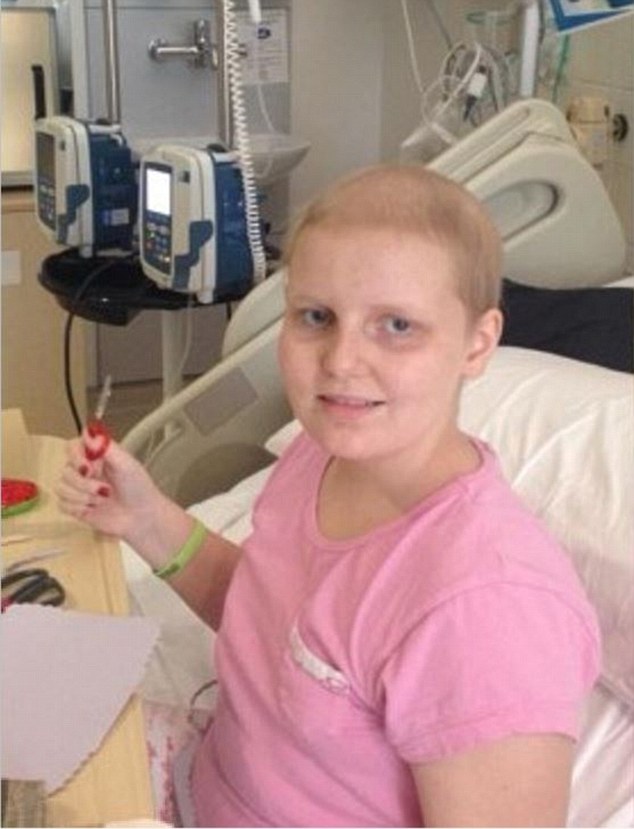 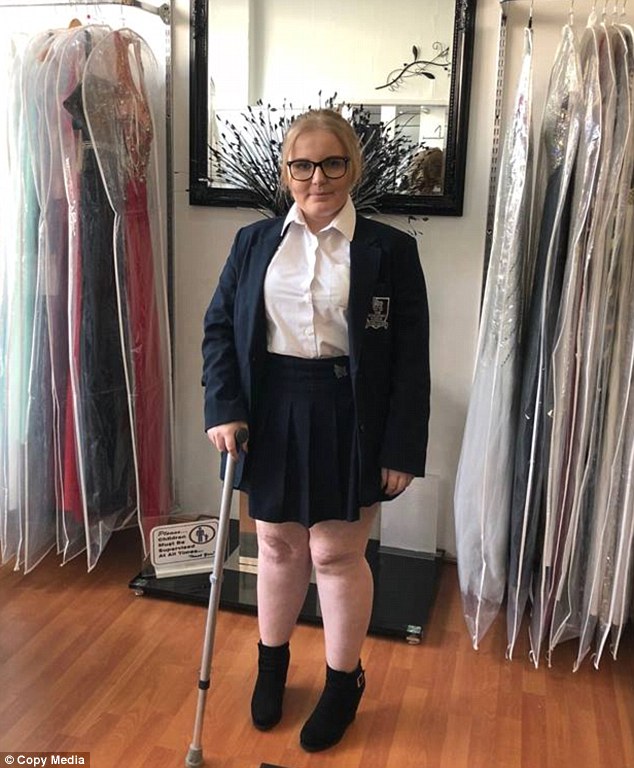 ‘The school prom was the one chance that I had to be like all the other girls the same age,’ said Charlotte.

‘Although I don’t look like a typical teenager anymore, I have scars, my hair is short and everyone else is taller than me.

‘The Cinderella Project made me feel like a princess, but most importantly like a normal teenage girl who, despite everything that has happened to me, could attend her prom just like her friends, feeling beautiful and confident.’

Charlotte, who lives with her mother, Lynne, father, Paul and brother, Michael, was diagnosed with a rare and aggressive form of acute myeloid leukemia in January 2014, only five months after starting school.

Then just 11 years old, she had 18 weeks – four-and-a-half months – of chemotherapy which left her so sick she was confined to hospital for the entire time. 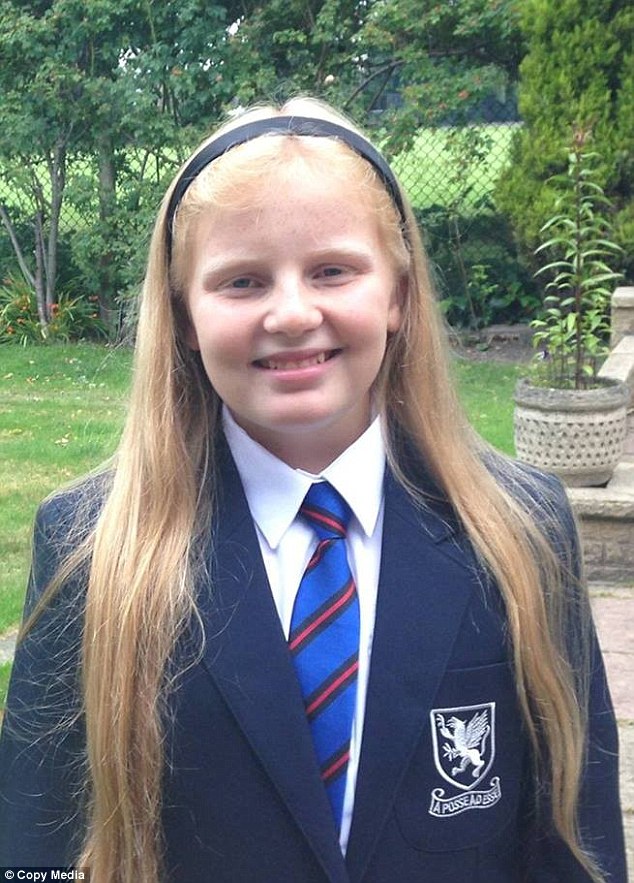 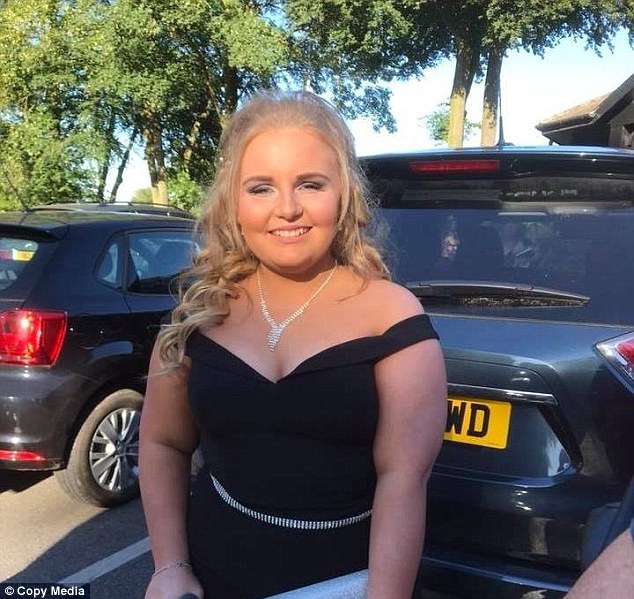 Charlotte said going to the prom was her last chance to feel like other girls her age before they finished school, an experience she missed out on for years

The treatment also damaged her liver and caused a rash all over her body from a fungal infection.

After just three weeks away from Royal Manchester Children’s Hospital, she was readmitted for a bone marrow transplant.

She was put in isolation for eight weeks, then had to spend six months at home.

‘That meant I was absent from school for around 15 months, and was only allowed back on a part-time basis,’ explained Charlotte.

‘I still had to undergo a further nine months of treatment as the transplant was trying to reject my body which is known as graft versus host disease.

‘At times I felt like all my friends had moved on because I was still not strong enough or well enough to do the things that they could do – simple things like going shopping or hanging out at each other’s houses.’ 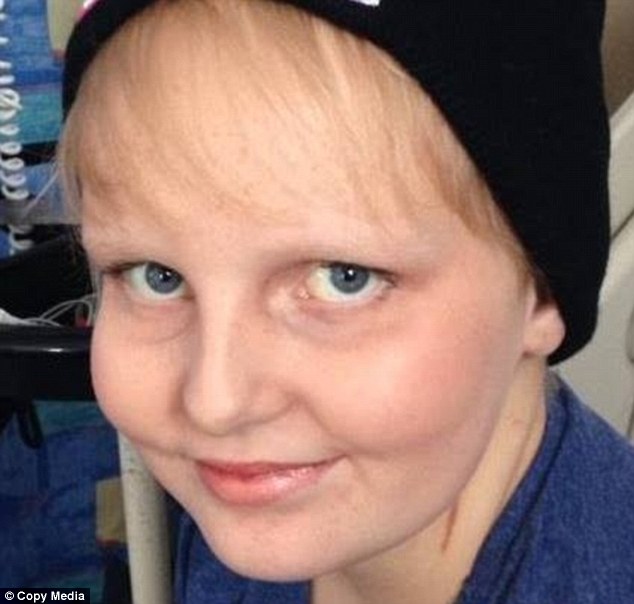 Charlotte had to have months of chemotherapy, which made her hair fall-out and has weakened her bones so much she will need surgery to repair the damage

Hair fell out and joints have been weakened by treatment

The harshness of the treatment meant Charlotte’s long strawberry blonde hair fell out, and she was left covered in scars and stretchmarks.

She has limited mobility, and faces more operations in the future to replace her knees, ankles, and wrist joints as well as having a metal plate put in her shin.

Young people with acute myeloid leukaemia (AML) have a better chance of surviving the disease – around 60 per cent of  15-24 year-olds will survive more than five years after their diagnosis, according to Cancer Research UK.

WHAT IS ACUTE MYELOID LEUKAEMIA?

AML’s cause is unclear. Smoking, being overweight, drinking during pregnancy and radiation exposure may increase a person’s risk of developing the disorder.

Chemotherapy is the main treatment.

A bone-marrow or stem-cell transplant may be required.

Symptoms of AML include weakness and fatigue, fever, bruising or bleeding easily, losing weight and pain in bones or joints.

Now a charity ambassador and wants to help other sick children

Throughout her illness and the trauma of treatment, teenage Charlotte has stayed positive and is determined to use her experience to help and inspire others.

Now an ambassador for children’s cancer charity Kidscan, she has raised thousands of pounds for the ward where she was treated.

She even asked friends and family to donate to the cancer charities instead of buying her birthday gifts.

A spokesperson for the Cinderella Project, which was born out of the Runway teen charity fashion event at Manchester Airport, described Charlotte as ‘a true inspiration.’

‘We were so thrilled to meet Charlotte, who has had to overcome many more challenges to get to her school prom than most young girls her age,’ the charity said.

‘As well as working hard to catch up and keep up with her school work, Charlotte helps support other young children undergoing treatment for cancer at RMCH by talking to them and reassuring them.

Charlotte has raised over £25,000 for charity

‘Despite her physical limitations, she also manages to raise thousands of pounds for children’s charities.

‘Charlotte epitomises the reasons why we have the Cinderella Project – it was a privilege to be able to arrange for her to visit the team at Diamante in Bramhall to choose her dress.

‘She looked fantastic and for her to be voted Prom Queen by her classmates was so well deserved.’

What you need to know about COVID-19 variants

David Graham health: Doctor Who star, 96, ‘can’t get out’ after suffering from a stroke

Many studies of digestive diseases fail to examine food insecurity