Mobile phones are changing the human skeleton: People spend so much time hunched over screens that ‘bony spikes’ are developing on the backs of our skulls

People spend so much time looking down at smartphones and tablets they are growing bony ‘spikes’ on the backs of their heads, scientists say.

Researchers said growing numbers of people have growths called enlarged external occipital protuberances at the base of their skull.

Considered rare when they were first discussed in the 1800s, we may now be able to feel the bony lumps with our fingers or see them on bald people.

And younger people are developing them faster, with research showing the bumps are most common among 18 to 30-year-olds. 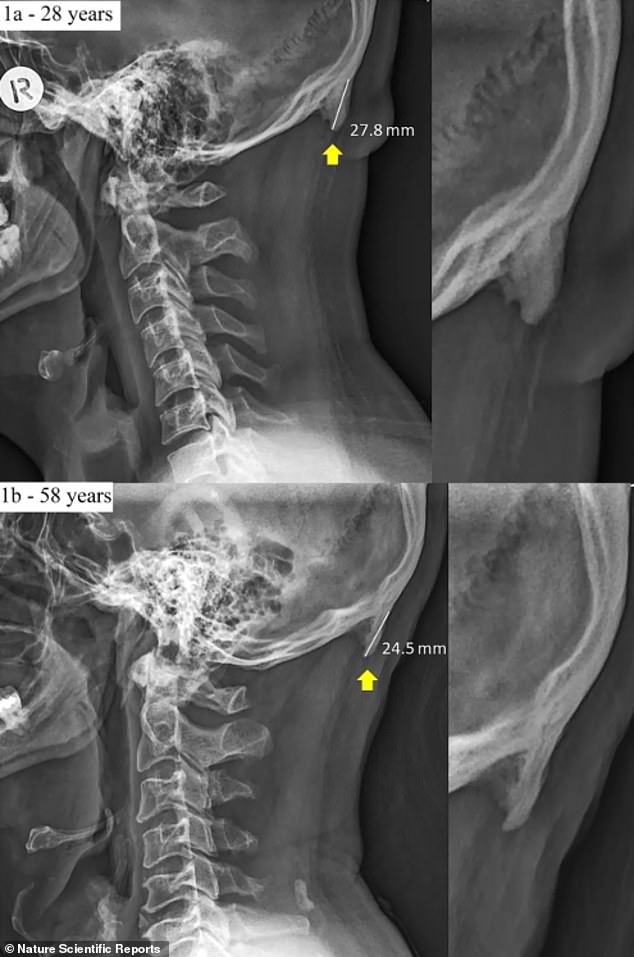 Researchers from Australia said the bony lumps, which they call enlarged external occipital protuberances, are becoming more common and larger among younger people who spend a lot of time looking down at smartphones and tablets because their neck muscles need bigger chunks of bone to attach to (Pictured: The bump of a 28-year-old is more than 3cm larger than a 58-year-old’s in a study)

Scientists at the University of the Sunshine Coast in Queensland, Australia, have done detailed research into the phenomenon.

They scanned more than a thousand skulls belonging to people ranging in age from 18 to 86, BBC Future reports.

The lead researcher, Dr David Shahar, told the BBC: ‘I have been a clinician for 20 years, and only in the last decade, increasingly I have been discovering that my patients have this growth on the skull.’

Dr Shahar suggests the reason for the bony spike becoming more common is the amount of time people – particularly the young – spend looking down.

Hours spent scrolling on smartphones, tablets and laptops could be putting so much strain on lesser used parts of the body that the body parts actually change.

Specifically, the muscles which connect the neck to the back of the head are overused as they try to hold still the skull – an average adult head can weigh around 5kg (11lbs).

In response to those muscles getting bigger and stronger, Dr Shahar suggests, the skeleton grows new layers of bone to reinforce and widen the area.

A leading Australian chiropractor last year warned he is seeing an ‘epidemic of people developing what he calls ‘text neck’.

Teenagers and children as young as seven are developing hunchbacks and abnormally curved spines because of an addiction to smartphones, according to Dr James Carter.

Dr Carter, who is based in Niagara Park on the coast of New South Wales, said children are changing the shapes of their skeletons by bending over for hours at a time.

‘I have started seeing lots of cases over the past two years, especially in young schoolchildren and teenagers,’ Dr Carter told Daily Mail Australia.

‘The condition is called “text neck” because it is often caused when people sit with their heads dropped forward looking at their devices for several hours at a time.

‘Instead of a normal forward curve, patients can be seen to have a backwards curve. It can be degenerative, often causing head, neck, shoulder and back pain.

‘Many patients come in complaining they have a headache, but we actually find text neck is the cause of it. They often fail a simple heel-to-toe test and tend to fall over.’

On average the EOPs measured 2.6cm (1in), which the scientists said was ‘significantly larger’ than the average in 1996.

The reason for this, they suggest, is a ‘hand held technological revolution’.

According to research revealed last year, the average person in the UK spent 24 hours per week – about three-and-a-half per day – on their smartphones in 2017.

Some 78 per cent of Britons own a smartphone and one in five adults spend 40 hours or more online every week.

Dr Shahar and colleagues wrote in their study that ‘repetitive and sustained mechanical load’ leads to adaptation of the tendons and connective tissues.

They said: ‘The development of [enlarged] EOP may be attributed to, and explained by, the extensive use of screen-based activities by individuals of all ages, including children, and the associated poor posture.

‘Musculoskeletal disorders related to poor posture while using computers and tablets have been investigated extensively and were identified as a risk factor for the development of related symptoms at the neck, shoulders and forearms.’

And Dr Shahar said that, although the bony lumps are unlikely to cause any damaging effects themselves, they may never go away.

He added: ‘Imagine if you have stalactites and stalagmites, if no one is bothering them, they will just keep growing’.

Uninsured rate among young adults has plummeted in the last decade, report finds

Use of antibiotics in preemies has lasting, potentially harmful effects

7 facts about the origin of the novel coronavirus

The power of data: how a digital health ecosystem will improve care provision