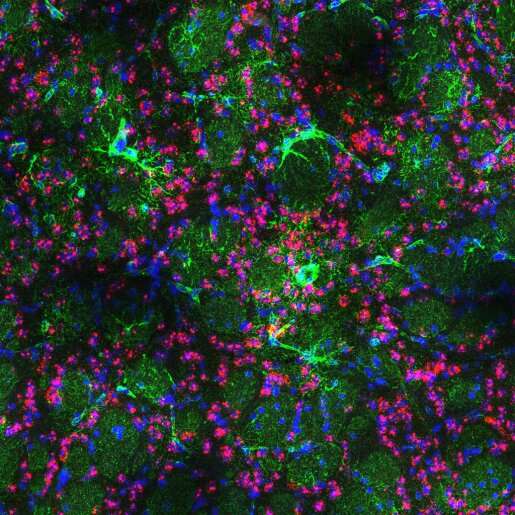 The brain is not a passive recipient of injury or disease. Research has shown that when neurons die and disrupt the natural flow of information they maintain with other neurons, the brain compensates by redirecting communications through other neuronal networks. This adjustment or rewiring continues until the damage goes beyond compensation.

This process of adjustment, a result of the brain’s plasticity, or its ability to change or reorganize neural networks, occurs in neurodegenerative conditions such as Alzheimer’s, Parkinson’s and Huntington’s disease (HD). As the conditions progress, many genes change the way they are normally expressed, turning some genes up and others down. The challenge for researchers like Dr. Juan Botas, who studies HD, has been to determine which of the gene expression changes are involved in causing the disease and which ones help mitigate the damage, as this may be critical for designing effective therapeutic interventions.

In his lab at Baylor College of Medicine, Botas and his colleagues look to understand what causes the loss of communication or synapses between neurons in HD. Up until now, research has focused on neurons because the normal huntingtin gene, whose mutation causes the condition, contributes to maintaining healthy neuronal communication. In the current work, the researchers looked into synapses loss in HD from a different perspective.

The mutated huntingtin gene is not only present in neurons, but in all the cells in the body, opening the possibility that other cell types also could be involved in the condition.

“In this study we focused on glia cells, which are a type of brain cell that is just as important as neurons to neuronal communication,” said Botas, professor of molecular and human genetics and of molecular and cellular biology at Baylor and a member of the Jan and Dan Duncan Neurological Research Institute at Texas Children’s Hospital.

“We thought that glia might be playing a role in either contributing or compensating for the damage observed in Huntington’s disease.”

Initially thought to be little more than housekeeping cells, glia turned out to have more direct roles in promoting normal neuronal and synaptic function.

In a previous work, Botas and his colleagues studied a fruit fly model of HD that expresses the human mutant huntingtin (mHTT) gene in neurons, to understand which of the many gene expression changes that occur in HD are causing disease and which ones are compensatory.

“One class of compensatory changes affected genes involved in synaptic function. Could glia be involved?” Botas said. “To answer this question, we created fruit flies that express mHTT only in glia, only in neurons, or in both cell types.”

The researchers began their investigation by comparing the changes in gene expression present in the brains of healthy humans with those in human HD subjects and in HD mouse and fruit fly models. They identified many genes whose expression changed in the same direction across all three species but were particularly intrigued when they discovered that having HD reduces the expression of glial cell genes that contribute to maintaining neuronal connections.

“To investigate whether the reduction of expression of these genes in glia either helped with disease progression or with mitigation, we manipulated each gene either in neurons, glial cells or both cell types in the HD fruit fly model. Then we determined the effect of the gene expression change on the function of the flies’ nervous system,” Botas said.

They evaluated the flies’ nervous system health with a high-throughput automated system that assessed locomotor behavior quantitatively. The system filmed the flies as they naturally climbed up a tube. Healthy flies readily climb, but when their ability to move is compromised, the flies have a hard time climbing. The researchers looked at how the flies move because one of the characteristics of HD is progressive disruption of normal body movements.

Turning down the genes worked

The results revealed that in HD, turning down glial genes involved in synaptic assembly and maintenance is protective.

Do you really need to drink 8 glasses of water a day? An exercise scientist says ‘no’

How to Use Sunscreens the Right Way