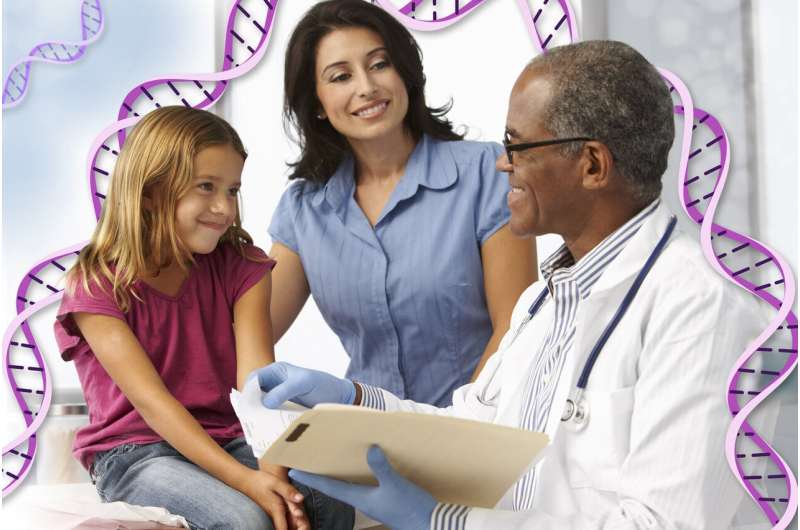 In children with rhabdomyosarcoma, or RMS, a rare cancer that affects the muscles and other soft tissues, the presence of mutations in several genes, including TP53, MYOD1, and CDKN2A, appear to be associated with a more aggressive form of the disease and a poorer chance of survival. This finding is from the largest-ever international study on RMS, led by scientists at the National Cancer Institute’s (NCI) Center for Cancer Research, part of the National Institutes of Health.

The study, published in the Journal of Clinical Oncology on June 24, provides an unprecedented look at data for a large cohort of patients with RMS, offering genetic clues that could lead to more widespread use of tumor genetic testing to predict how individual patients with this childhood cancer will respond to therapy, as well as to the development of targeted treatments for the disease.

“These discoveries change what we do with these patients and trigger a lot of really important research into developing new therapies that target these mutations,” said Javed Khan, M.D., of NCI’s Genetics Branch, who led the study.

“The standard therapy for RMS is almost a year of chemotherapy, radiation therapy, and surgery. These children get a lot of toxic treatments,” said the study’s first author, Jack Shern, M.D., of NCI’s Pediatric Oncology Branch. “If we could predict who’s going to do well and who’s not, then we can really start to tailor our therapies or eliminate therapies that aren’t going to be effective in a particular patient. And for the children that aren’t going to do well, this allows us to think about new ways to treat them.”

RMS is the most common type of soft tissue sarcoma in children. In patients whose cancer has remained localized, meaning that it has not spread, combination chemotherapies have led to a five-year survival rate of 70%-80%. But in patients whose cancer has spread or come back after treatment, the five-year survival rate remains poor at less than 30%, even with aggressive treatment.

Doctors have typically used clinical features, such as the location of the tumor in the body, as well as its size and to what extent it has spread, to predict how patients will respond to treatment, but this approach is imprecise. More recently, scientists have discovered that the presence of the PAX-FOXO1 fusion gene that is found in some patients with RMS is associated with poorer survival. Patients are now being screened for this genetic risk factor to help determine how aggressive their treatment should be.

Scientists have also begun using genetic analysis to dig more deeply into the molecular workings of RMS in search of other genetic markers of poorer survival. In this new study—the largest genomic profiling effort of RMS tumors to date—scientists from NCI and the Institute for Cancer Research in the United Kingdom analyzed DNA from tumor samples from 641 children with RMS enrolled over a two-decade period in several clinical trials. Scientists searched for genetic mutations and other aberrations in genes previously associated with RMS and linked that information with clinical outcomes. Among the patterns that emerged, patients with mutations in the tumor suppressor genes TP53, MYOD1, or CDKN2A had a poorer prognosis than patients without those mutations.

Using next-generation sequencing, researchers found a median of one mutation per tumor. Patients with two or more mutations per tumor had even poorer survival outcomes. In patients without the PAX-FOXO1 fusion gene, more than 50% had mutations in the RAS pathway genes, although RAS mutations did not appear to be associated with survival outcomes in this study.

The researchers believe that although they have identified the major mutations that may drive RMS development or provide information about prognosis, they have only scratched the surface in defining the genetics of this cancer, with many more mutations yet to be discovered. They note that more work is needed to identify targeted drugs for those mutations, and future clinical trials could incorporate genetic markers to more accurately classify patients into treatment groups. Two NCI-sponsored Children’s Oncology Group clinical trials are currently being developed using these markers, and all participants will have their tumors molecularly profiled.

The researchers hope that routine tumor genetic testing for rare cancers, such as RMS, will soon be a standard part of the treatment plan, as it is for more common cancers, such as breast cancer.

Headed away to school? Here’s what students with health issues need to know

Constipation in the Elderly

Stroke: Are you at high risk of the life-threatening condition? How to avoid the condition