Having a regular sauna really is good for you: Scientists discover it keeps the heart, skin and mind healthy – just 5 minutes is as good as a brisk walk!

It’s considered by many to be the best way of relaxing, after a long stressful week at work.

But a new scientific report has today suggested bathing in a sauna may be much more than just a way of unwinding.

Scientists now believe just five minutes in the high temperatures is as good for the body as physical exercise, such as a brisk walk.

A review of literature shows regularly spending time in a sauna can reduce the risk of heart disease, lung disease and an early death.

While basking in the hot temperatures may also combat mental health issues, skin diseases, arthritis, headaches and the flu. 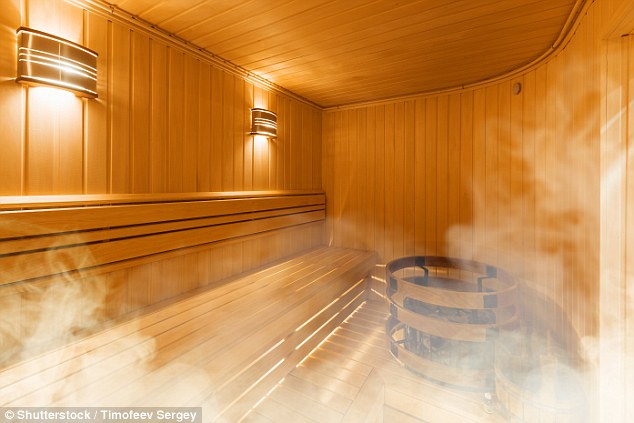 Scientists now believe just five minutes in the high temperatures is as good for the body as physical exercise, such as a brisk walk

Researchers reviewed 70 studies on the health outcomes of Finnish sauna baths to establish the long-list of health benefits.

Scientists at the universities of Bristol, Jyväskylä and Eastern Finland conducted the review, published in Mayo Clinic Proceedings.

They found the benefits of sauna bathing, widely documented in recent years, stem from its effects on the autonomic nervous system.

COULD GOING TO THE SAUNA CUT YOUR RISK OF STROKE?

They have long been lauded an easy way to help with weight loss. But taking regular saunas could slash the risk of stroke, research suggests.

People who took a sauna between four to seven times a week were 61 per cent less likely to have a stroke than those who had just one, a study found.

The more frequently saunas were taken, the lower the risk of stroke.

Experts said the high temperatures reduce blood pressure – a leading cause of stroke – as well as boost the immune system and keep the heart and blood vessels healthy.

Dr Setor Kunutsor, of the University of Bristol, led the study, which analysed data from 1,628 people over a period of 15 years in Finland, where most homes are fitted with saunas.

The high temperatures of saunas can also cut inflammation and oxidative stress, two well-known factors of chronic conditions such as diabetes.

Regular sauna baths are also associated with a better health-related quality of life, according to study author Dr Jari Laukkanen.

He said: ‘Sauna bathing, an activity used for the purposes of pleasure, wellness, and relaxation, is linked to a remarkable array of health benefits.

‘It is a safe activity and can even be used in people with stable CVD, provided it is used sensibly for an appropriate period of time.

‘Sauna bathing may be a remedy to the call for additional lifestyle interventions needed to enhance health and wellness.’

Dr Laukkanen added that the physiological response produced by saunas is similar to that of ‘moderate or high-intensity’ activities.

However, despite the list of health benefits, some studies have found saunas can have the opposite effect.

Italian researchers warned five years ago men who visit saunas may be damaging their sperm and have a lower count.

First Nations people need to get vaccinated, but are not being consulted on strategy

Most Pregnant Women With COVID-19 Are Asymptomatic

Kidney patients are the most complex patients