It's a frightening scene straight out of Game of Thrones: a row of people, including me, strapped down to benches with foam bricks placed under our spines and heavy weights dangling from leather masks over our faces, pulling our necks backward. 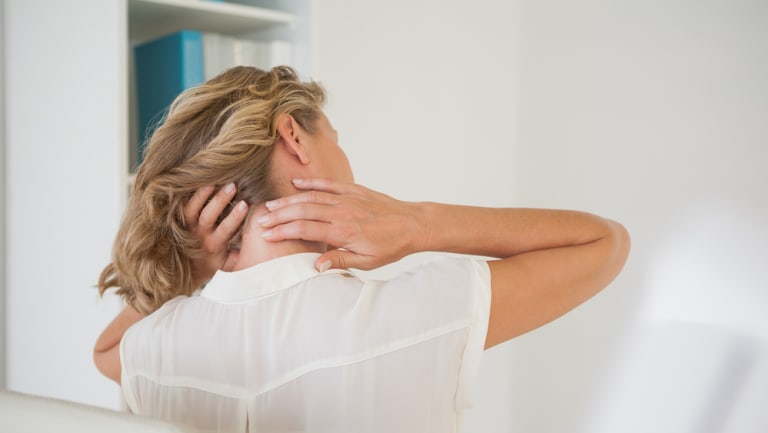 As I lie there, waiting and watching as the clock ticks agonisingly slowly towards its 15-minute alarm, I wonder why I'm subjecting myself to this.

While it might sound primitive, this is becoming a common treatment for some of the 21st century's increasing afflictions: text neck, iHump, tablet stoop and computer hunch.

I first visited this health centre after I hurt my back. The chiropractor took a photo of me standing up straight, or so I thought. The image shocked me. My shoulders were hunched, my back was rounded and my neck was extended forward. I looked horribly like a turtle foraging for earthworms.

Apparently, it was the result of too much stooping to peer at my phone, poor posture at my computer, and slouching over books and newspapers. "You'll have to do something about your posture," the chiropractor told me. "Otherwise this will happen again." I didn't, and it did.

Sceptical but desperate, I enrolled in a course of 20 sessions of Chiropractic BioPhysics (CBP). Dr Alex Hopwood at Healthspace in Sydney first did the normal chiro adjustments, then strapped me to a bench with a foam brick under my back.

As I became more used to that, and practised at home, I progressed to having a spinal orthotic under my lower back, another one under my neck, and then those ghastly weights hanging from the strappy leather mask around my face, forcing my neck back.

It was incredibly uncomfortable, but great training in mind over matter. Some people, I noticed, listened to music through headphones, some (remarkably) tried to sleep, others meditated. I just counted the minutes.

Between sessions, I looked up all the literature I could find on the practice, which is apparently all the rage in the US but still in its infancy here. It actually looks promising.

Studies published in reputable journals like The Archives of Physical Medicine and Rehabilitation found that controlled trials had positive results in straightening people's backs and lessening the tendency for their necks to crane forward, reducing stress on the spinal cord, nervous system and spinal nerves, and resulting in a gain in overall health.

Hopwood is a passionate CBP advocate. "My mother suffered terrible migraines, so bad she'd sometimes stay in bed for two weeks," he says. "Then we heard about CBP and she decided to give it a go.

"After six months of treatment, she had no more episodes. It was so incredible, I decided to become a chiropractor and certified in spinal remodelling CBP. This does to the spine what braces can do for teeth. It can change people's lives; I've seen it."

The waiting room at Hopwood's practice is full of interesting stories, including that of the Canberra construction project manager driving to Sydney twice a week for treatment on his curved spine so he'd be able to stand up tall next to his bride at their wedding. '

And for me? Before-and-after X-rays have shown that, in six months, my neck has moved from being 22 millimetres forward to just 5 millimetres, while my thoracic spine curve has improved by 25 per cent.

I can actually feel that I'm standing much taller and straighter, and look forward to a future rather more Esmeralda than, well, Quasimodo.

This article appears in Sunday Life magazine within the Sun-Herald and the Sunday Age on sale July 29.

In China’s vaccine race, shortage of monkeys and weekends

Heart repair and regeneration after a heart attack: A review