Researchers at the Center for Nanoparticle Research, within the Institute for Basic Science (IBS, South Korea), have developed a set of nanoparticles for Parkinson’s disease treatment. Tested in mice and published in Angewandte Chemie as a “hot paper,” this study represents the first biomedical application of nanoparticles in the clearance of reactive oxygen by-products in Parkinson’s, and gives new hints of therapeutic targets. In the future, the system is expected to be used in the identification and treatment of other pathologies caused by reactive oxygen species, including: cancers, cardiovascular diseases, neurodegenerative diseases, and sepsis.

Parkinson’s disease is characterized by the sudden degeneration and death of neurons that secrete dopamine in the brain. Accumulation of reactive oxygen species damages the neurons, by contributing to the onset of mitochondrial dysfunction, neuroinflammation, and neuronal death.

The brain’s low antioxidant levels and abundance of lipids, make it more vulnerable to the side effects of reactive oxygen species, including free radicals. The oxidative stress caused by these molecules inside mitochondria, together with neuroinflammation due to intracellular and extracellular oxidative stress are considered important causes of Parkinson’s disease.

Until now, there has been no technique to selectively clear reactive oxygen species, nor to distinguish their effect according to their cellular localization. To solve these problems, IBS nanoparticle researchers have devised three types of ceria nanoparticles with different sizes and surface properties, capable of selectively removing reactive oxygen species from mitochondria, intracellular, and extracellular spaces. 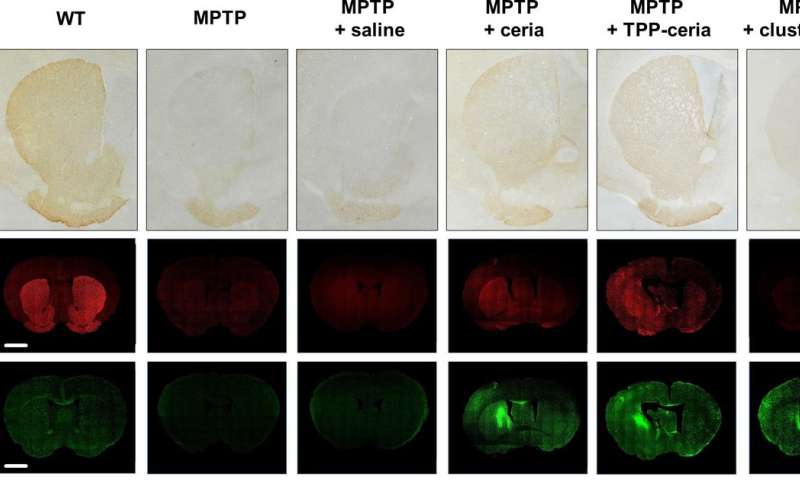 The nanoparticles delivered to a part of the brain, called corpus striatum, in mouse models improved the typical signs of Parkinson’s disease: neuro-inflammation, oxidative stress, and diminishing level of the enzyme tyrosine hydroxylase – a hallmark of Parkinson’s disease – which produces a dopamine precursor and affects mobility.

“These experiments have identified the essential role of intracellular and mitochondrial reactive oxygen species in the progression and treatment of Parkinson’s disease. We hope that the ceria nanoparticle system will be useful tools for developing therapeutic agents in diseases that involve oxidative stress, as well as other degenerative diseases,” explains KWON Hyek Jin, first author of the study.

“This result is not only the first to develop a technique to selectively remove reactive oxygen species from intracellular, extracellular, and mitochondrial spaces, but also to investigate the effects of Parkinson’s disease, the cause of the disease, and a new medical application of nanoparticles,” explains HYEON Taeghwan, the corresponding author of the study.

How to keep gums healthy: 7 ways

How does the ‘garlic breath test’ work? How does it help prevent the spread of Covid?

World Egg Day: Recipes from around the world that you must try