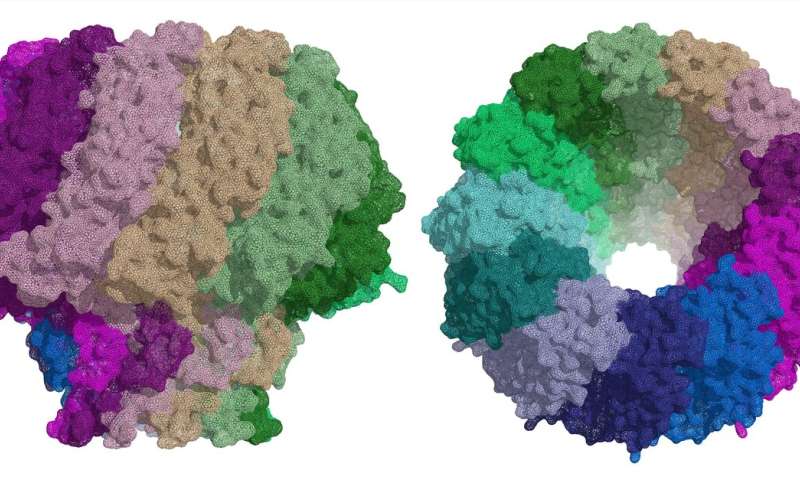 Scientists at the Institute for Research in Biomedicine (IRB Barcelona) and the Molecular Biology Institute of Barcelona (IBMB-CSIC) have published a study in the journal Nature Communications revealing the structure of a key protein, known as a portal, in Epstein-Barr virus infection.

The Epstein-Barr virus, which belongs to the herpesvirus family, is one of the most widespread human viruses and the main cause of infectious mononucleosis (also known as glandular fever). In addition, it causes several kinds of cancer, including Burkitt and Hodgkins lymphoma, stomach cancer and nasopharyngeal cancer, as well as several autoimmune diseases. There is currently no treatment for infections caused by this virus.

“Understanding the structure of the portal protein could prove useful for the design of inhibitors for the treatment of herpesvirus infections such as Epstein-Barr. Also, given that this protein is found only in herpesviruses, these inhibitors would be virus-specific and may be less toxic for humans,” says Miquel Coll, head of the Structural Biology of Protein & Nucleic Acid Complexes and Molecular Machines Lab at IRB Barcelona and professor at CSIC.

All herpesviruses have a similar infection mechanism. Having entered the cell and reached the nucleus, the viruses release their DNA, which can remain latent for years until certain conditions trigger its replication. After this process, DNA is then introduced into new viral capsids, thereby forming new viruses that can attack other cells. The portal protein is the route through which DNA enters the viral capsid and through which it leaves to infect cells.

In a second study recently published in the same journal, the researchers have also characterised the structure of the portal protein in bacteriophage T7. This phage is a virus that infects only bacteria and, interestingly, its DNA packaging system resembles that used by herpesviruses.

“By solving the structure of the portal protein of bacteriophage T7, we have been able to infer how the portal from Epstein-Barr virus works,” explain Cristina Machón and Montserrat Fàbrega, postdoctoral fellows at IRB Barcelona and IBMB-CSIC, and first authors —together with Ana Cuervo, from the National Centre for Biotechnology (CNB-CSIC)—of the studies published.

“In both viruses, the portal protein comprises 12 subunits, forming a large mushroom-shaped structure, with a central channel through which DNA passes. This channel has a valve that regulates the entry and exit of the virus’ genetic material,” explains Coll.

How Do E-Cigarettes Change Blood Vessels? A New Study Has the Answer

Mum loses 10st after hearing something devastating in the school playground

Take this advice for sleeping during a heatwave

Diet: belly fat is slowing down the weight loss – Here are tips to make the courage