A bedside test for people who have had a stroke could predict their health three years later.

The thinking skills test, done in the week after a stroke, can identify people who are seven times more likely to die within three years.

People who do badly are more than twice as likely to later struggle with daily activities like washing and dressing.

The Montreal Cognitive Assessment, famously passed by US President Donald Trump, takes only minutes to complete and includes memory, language and concentration tests.

It is widely used for people who have suffered a stroke. 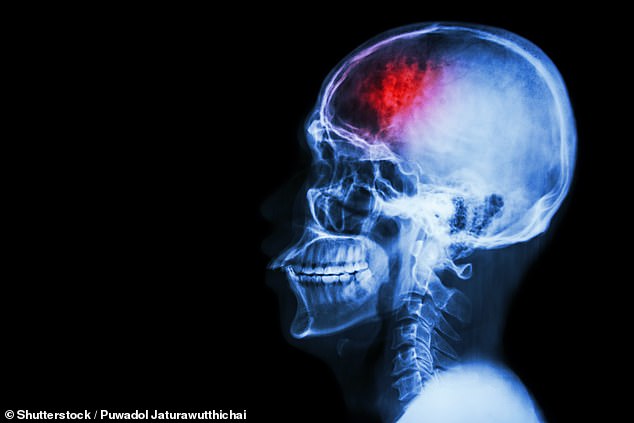 Patients who do best have a much better prognosis than those who struggle, according to new research by German scientists

A study of 274 stroke patients found it could predict their chances of death, mobility problems and ability to live independently.

That is because problems with cognition, or ‘thinking skills’, can be a red flag for wider issues in the brain and circulation problems leading to potentially fatal high blood pressure and cardiac disease.

Researchers found those who scored badly in the week after a stroke had a survival rate of 83 per cent, compared to 97 per cent for those with no thinking problems.

Among those scoring less than 26 on cognitive skills, 42 per cent had problems with daily activities three years later, compared to 13 per cent without cognitive impairment.

Dr Martin Dichgans, a co-author of the study from Ludwig-Maximilians University in Germany, said: ‘We found that this test, which takes less than ten minutes, can help predict whether people will have impaired thinking skills, problems that keep them from performing daily tasks such as bathing and dressing and even whether they will be more likely to die.

‘This test should be used to screen people with stroke and to counsel them and their families about long-term prognosis, and also to identify those who would most benefit from interventions that could improve their outcomes.’

Researchers gave the test to patients in Germany and France, dividing them into two groups of cognitively impaired people and those without thinking problems.

Participants were then tested for their thinking and memory skills, motor functioning and ability to complete daily living tasks six months, one year and three years after their stroke.

Those with thinking problems on the first test were around five times more likely to have problems with their motor skills.

The results, published in the journal Neurology, show 29 per cent struggled with motor skills, compared to five per cent of those without cognitive impairment.

The study concludes that people whose thinking abilities are damaged by a stroke may need ‘special attention’ and miss out on important rehabilitation, causing problems later on.

An editorial based on the study was written by Drs Elisabeth Marsh and Franz Fazekas, at Johns Hopkins University and the Medical University of Graz, Austria.

They state: ‘One potential explanation may be that good cognitive function is required to participate in activities such as taking medications as prescribed that are important for physical wellbeing.’

Dr Sara Imarisio, head of research at Alzheimer’s Research UK, said: ‘While this study did not look at people with dementia, having a stroke is a major risk factor for developing the condition and memory and thinking decline more generally.

‘This study suggests that people’s memory and thinking immediately after a stroke could predict longer term impairment, but it’s unlikely that a single test would capture everyone at risk of long-term memory problems.’

WHAT IS A STROKE?

There are two kinds of stroke:

An ischemic stroke – which accounts for 80 percent of strokes – occurs when there is a blockage in a blood vessel that prevents blood from reaching part of the brain.

The more rare, a hemorrhagic stroke, occurs when a blood vessel bursts, flooding part of the brain with too much blood while depriving other areas of adequate blood supply.

It can be the result of an AVM, or arteriovenous malformation (an abnormal cluster of blood vessels), in the brain.

Thirty percent of subarachnoid hemorrhage sufferers die before reaching the hospital. A further 25 percent die within 24 hours. And 40 percent of survivors die within a week.

Age, high blood pressure, smoking, obesity, sedentary lifestyle, diabetes, atrial fibrillation, family history, and history of a previous stroke or TIA are all risk factors for having a stroke.

SYMPTOMS OF A STROKE

Of the roughly three out of four people who survive a stroke, many will have life-long disabilities.

Both are potentially fatal, and patients require surgery or a drug called tPA (tissue plasminogen activator) within three hours to save them.

A woman donated 470 litres of breast milk. Know about her rare condition

‘Microbubbles’ could destroy more than half of hard-to-treat tumours