A teenager who could die from a strong smell because of a rare condition has had her life turned around by a specially-trained dog.

Martina Baker, 15, had to stay indoors in her window-less bedroom because of mast cell activation syndrome (MCAS).

Allergic to ‘almost everything’, including heat, cleaning products, perfumes and cooking oils, even a whiff could send her into anaphylactic shock.

The teenager, from Maine, must wear a mask outdoors, and has lost friends and missed school because of her condition.

Now, Martina has a highly-trained dog called Caiomhe, pronounced Queeva, who alerts her to possible dangers before they happen.

After two and a half years of misery of going to hospital three times a week, Martina is able to see a movie at the theatre again, safe with her dog by her side. 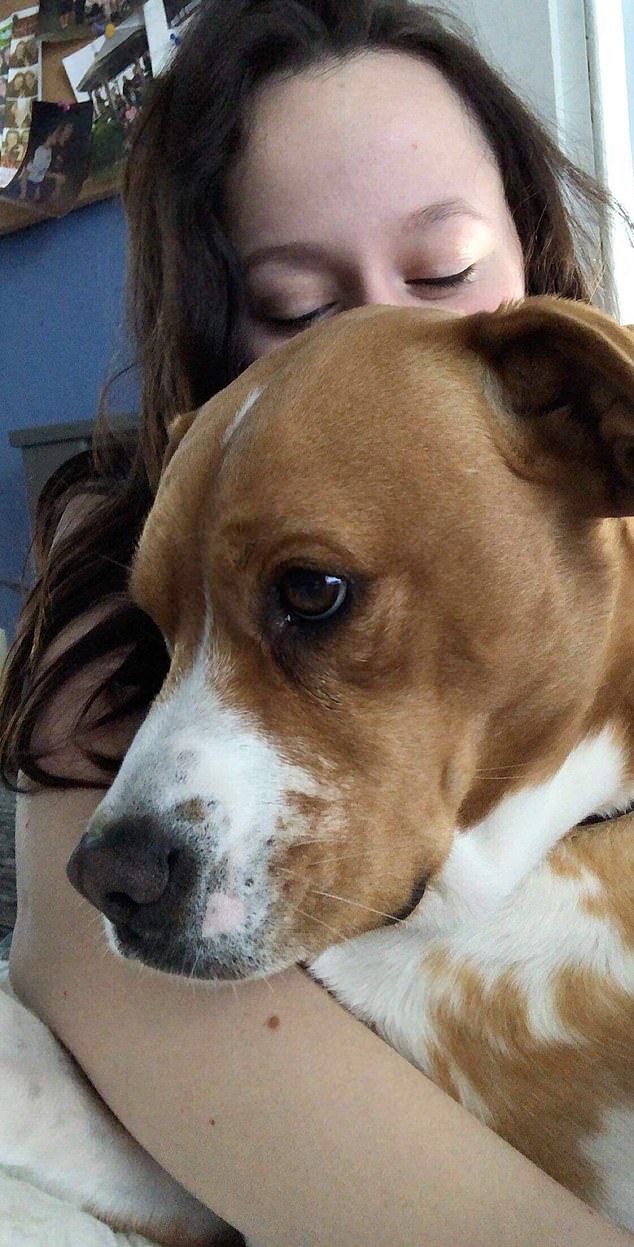 Martina Baker, 15, has a highly-trained dog called Caiomhe (pronounced Queeva) who alerts her when she is about to suffer an allergic reaction to a rare disorder 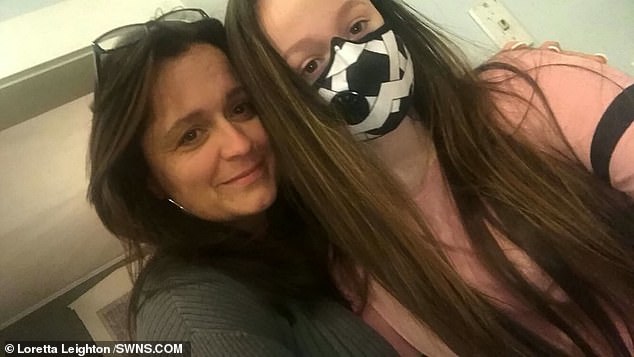 Martina, pictured with her mother, Loretta Morse Leighton, 48, must wear a mask if she goes outdoors, spending most of her time in her ‘sealed’ bedroom 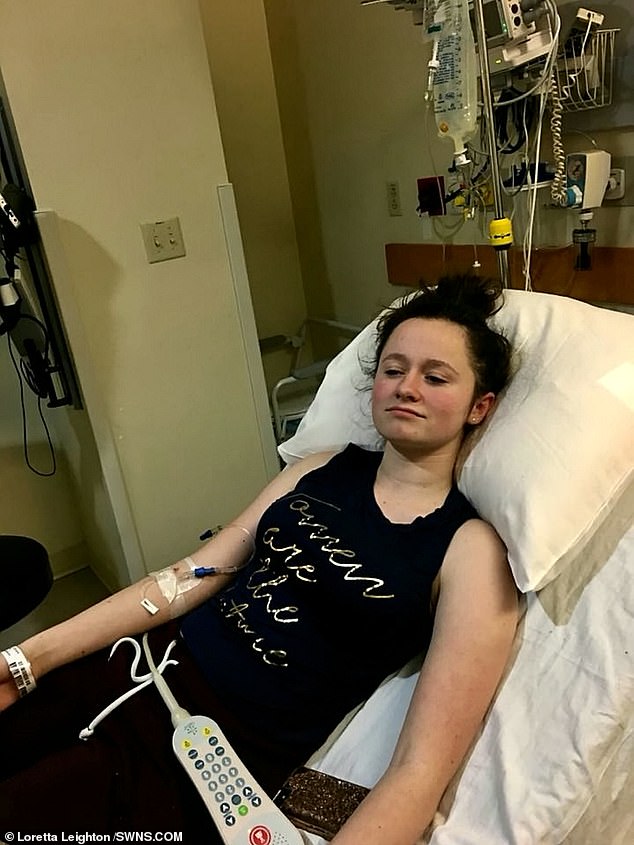 Martina was diagnosed with Mast Cell Activation Syndrome (MCAS) after her reactions to ‘almost everything’ baffled doctors for around two and a half years. Before getting Caiomhe, she would be in the hospital up to three times a week with anaphylactic shock 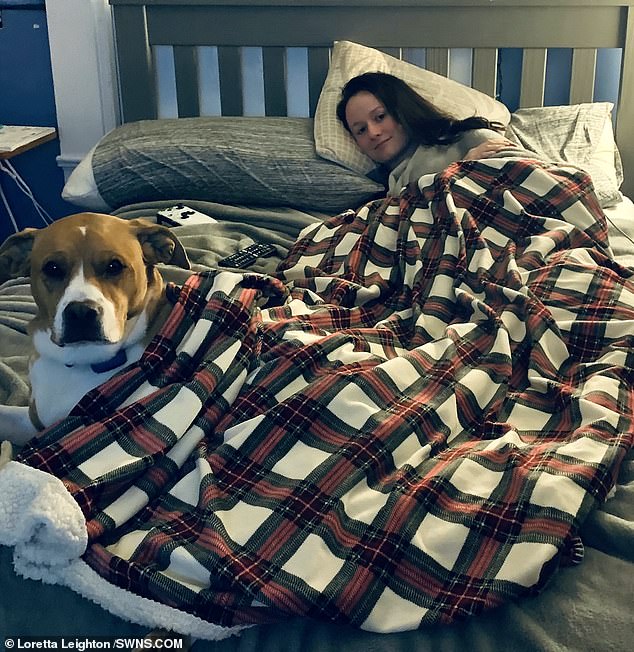 Martina, with Caiomhe, has lost friends and missed time at school due to her condition

Until two and a half years ago, Martina was a completely healthy child.

But she suddenly became plagued with mystifying symptoms that doctors were unable to find a cause for.

She said: ‘I wasn’t allergic to anything before, then one day I woke up with hives all over my body.

‘I had to go to the hospital because I had an anaphylactic reaction. My throat started swelling up with hives. They treated me with an EpiPen.’

WHAT IS MAST CELL ACTIVATION DISORDER?

Mast cell activation disorder is the umbrella term for a spectrum of diseases caused by the inappropriate activation or build-up of mast cells in the body’s tissues.

Mast cells are produced in the bone marrow and are an important part of the immune system and help fight infection.

When mast cells detect an allergen, they release histamine and other chemicals into the bloodstream. Histamine makes the blood vessels expand and the surrounding skin itchy and swollen.

Mast cells sometimes mistake harmless substances, such as pollen, for infectious germs, and trigger the process of swelling.

This can cause the skin to become red, swollen and itchy, and it can also create a build-up of mucus in the airways, which become narrower.

People with the condition have an increased risk of having a severe and life-threatening allergic reaction called anaphylaxis.

Symptoms include itchy skin or a raised, red skin rash, feeling light-headed or faint and swelling of the throat, mouth and tongue which can lead to breathing difficulties.

Martina’s mother, Loretta Morse Leighton, 48, a family therapist, said: ‘The hives would flare up all the time. She’d go into anaphylactic shock and we’d to have to rush her to the ER about three times a week.

‘We never knew what was triggering it really.

‘Last summer a skunk sprayed off outside Martina’s bedroom window, she went into anaphylactic shock and had to be rushed to A&E.

‘Afterwards she had to go and live with a friend for almost two weeks while we had her bedroom windows and door completely sealed up. It was awful.’

The teenager is also highly allergic to marijuana smoke, which poses a problem in her home state, where it is legal for recreational use.

Martina often wears a mask when she goes outside and the family still has to be very careful in their own home.

Mrs Leighton cleans with vinegar instead of bleach, and has stopped using all detergents on sheets and clothing.

They must practice ‘odourless cooking’ -presumably because the smell can set Martina off – and spend a lot of time grilling outside, even in winter.

Martina is extremely sensitive to warmth, so her bedroom isn’t heated at all, even during the freezing Maine winters.

‘We took her to see a specialist in every major discipline, everything from cardiologists to psychologists,’ Mrs Leighton said.

Martina eventually saw an immunologist in Massachusetts, Dr Jonathan Bayuk, who correctly diagnosed her with MCAS. 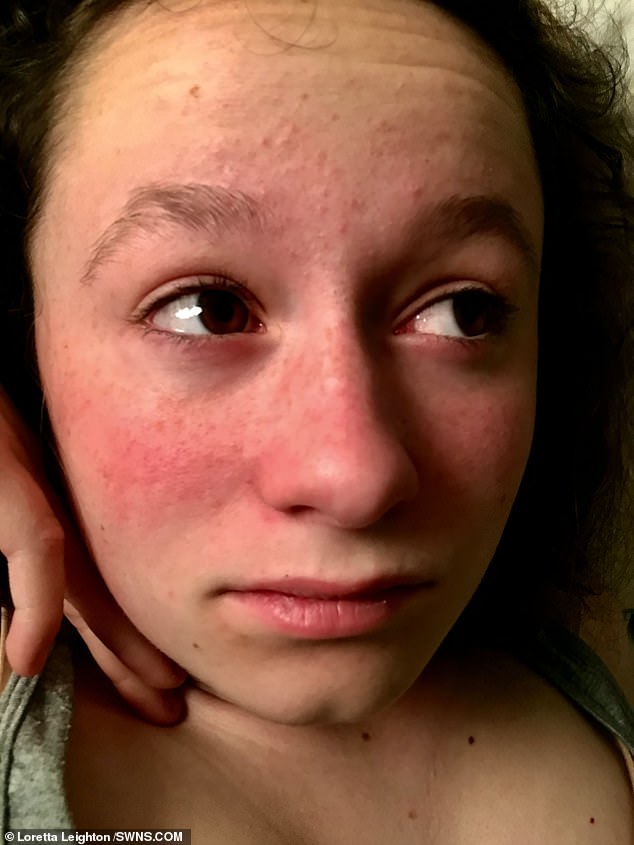 Martina first started to break out in hives and her throat would swell, needing treatment with an EpiPen. Pictured, her face suffering from a reaction. 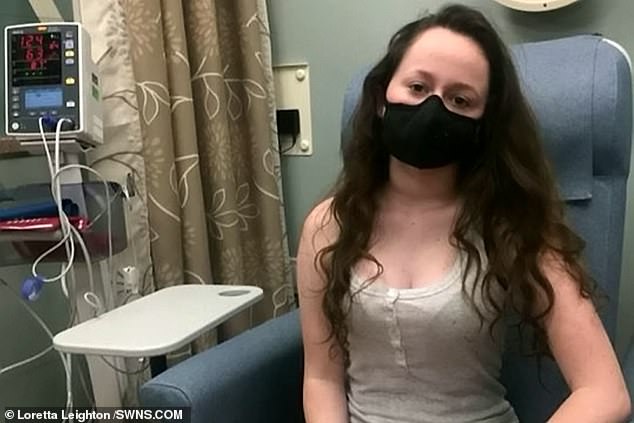 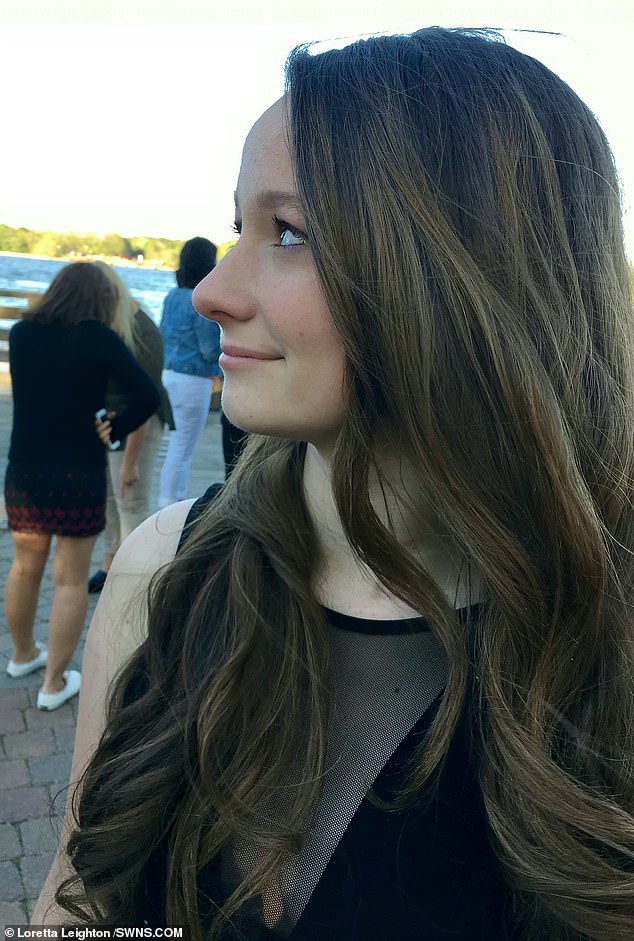 Martina, pictured before her condition started to show symptoms, was a healthy child 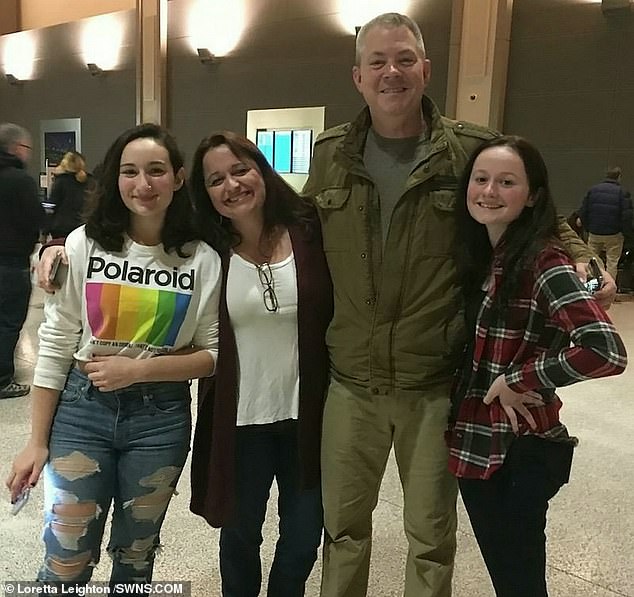 Martina feels more safe to leave her house now that she has been given a service dog, which cost $10,000. Pictured, with her sister, Arianna Baker, 13, mother, and father, Herbert Leighton, 51

MCAS, named in 2007, is a relatively new diagnosis. It is an umbrella term for a spectrum of diseases caused by the inappropriate activation or build-up of mast cells in the body’s tissues.

When mast cells detect an allergen, they release histamine and other chemicals into the bloodstream, making blood vessels expand and the surrounding skin itchy and swollen.

Last year, Mrs Leighton discovered that a service dog might help her daughter, and they were able to get one after raising $10,000 (£7,800).

Martina said: ‘Caiomhe has changed my life. I feel so much safer with her around. I am able to have a social life again.

‘I lost a lot of friends after I developed MCAS. It’s hard for people to handle, for them to watch me collapse and have to take my EpiPen and be rushed to hospital all the time.

‘It could be very lonely at times, but Caiomhe is always beside me protecting me, she’s a best friend for sure.

‘She makes me feel less alone, she even checks up on me in the middle of the night.’ 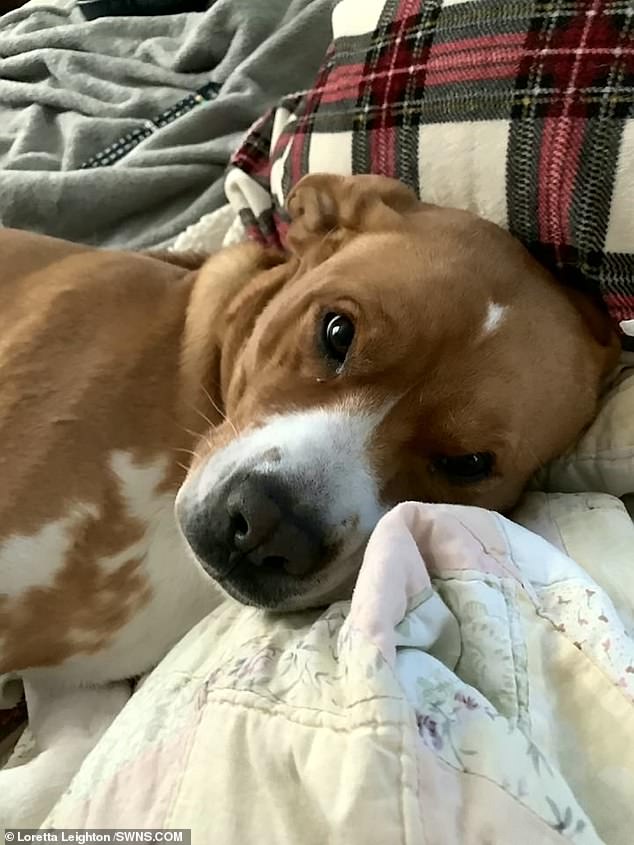 Service dog Caiomhe can sniff out when Martina is having a reaction before Martina realises it herself, because she can smell the release of histamine from her body 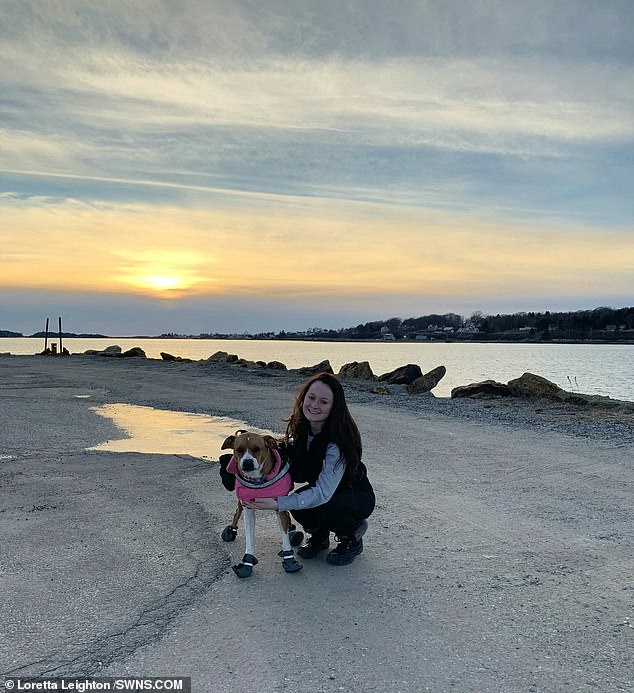 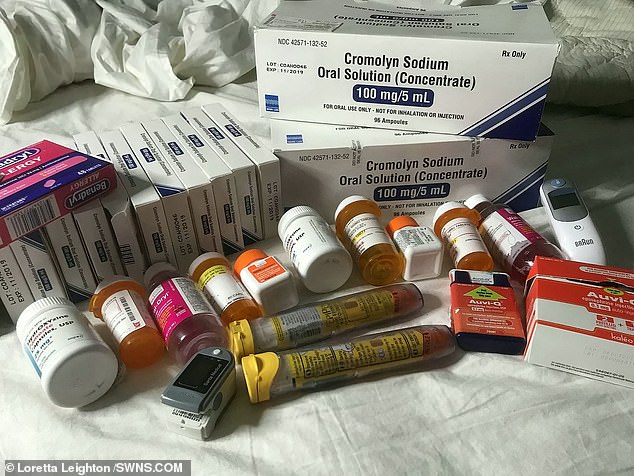 Martina takes mast cell stabilizing drugs to control her illness. MCAS is an umbrella term for a spectrum of diseases caused by the inappropriate activation or build-up of mast cells

Thanks to Caiomhe and regular mast cell stabilizing drugs, Martina’s anaphylactic episodes have reduced from three times a week to once every four to six weeks.

Caiomhe was trained by Jamie Robinson, 66, a specialist in Tucson, Arizona – one of the only people in the world to train dogs to assist MCAS patients.

Mrs Robinson trained Caiomhe to identify a long list of smells that are life-threatening triggers for Martina.

‘A dog’s nose is about 100,000 times better than a human nose and just about every biochemical process in our bodies is indicated with a change in scent,’ said Mrs Robinson, who runs her own service dog business called Access to Service Corp.

Mrs Robinson had Martina send her pieces of clothing she had worn so Caiomhe could get used to her scent, including when she was in anaphylactic shock because, to a dog, that scent is different.

Caiomhe can now sniff out when Martina is having a reaction before Martina realises it herself, because she can smell the release of histamine from her body.

Martina and three-year-old Caiomhe were first united on January 5 and have been inseparable ever since.

Mrs Leighton said: ‘Martina has endured a lot of staring, pointing and rude remarks. People do not understand, it’s very difficult for her but she’s stayed extremely strong, I’m so proud of her.

‘I feel that Caiomhe was destined to be my daughter’s guardian angel.’

Man spilled semen as a “drug” for his back pain-And then what happened?

Kiera Knightley Says She's Been Wearing A Wig For Years

The effect of taking antidepressants during pregnancy