As 1,000 babies leave hospital with undiagnosed heart conditions each year…the simple test that could have saved newborns like Tommy 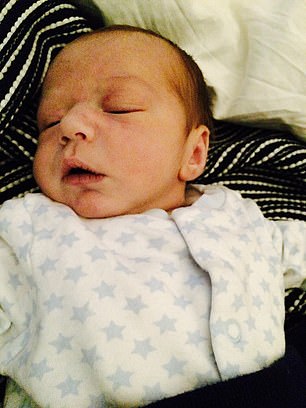 Tragedy at 11 days: Tommy Pye’s condition was spotted too late for medics to treat him

Natasha Pye has a picture of her newborn son Tommy that she treasures. It is just a snap on her phone taken when he was 11 days old.

But it is the last picture Natasha and her partner Andy have of their little boy alive — just minutes after it was taken, Tommy stopped breathing.

‘We’d gone to see my grandparents but came home early because Tommy was screaming and wouldn’t settle —which was unlike him,’ recalls Natasha, 29, who lives in York with Andy, 30, who works in construction, and their children — Farrah, two, Albie, one month, and Imogen, seven, Natasha’s daughter from a previous relationship.

‘I’d got into bed and laid Tommy down next to me for a second. When I went to pick him up again, his chest wasn’t moving and he was pale.’

What unfolded next was, she says, ‘just panic’.

‘I was trying to resuscitate Tommy while Andy phoned an ambulance. At some point the ambulance arrived and we were bundled inside. They tried everything, they injected adrenaline, they tried shocking him, but the whole time, I knew — I just knew.

‘I remember getting to the hospital and not wanting to go inside. I thought if I don’t go in, they can’t tell me my baby is dead — and then it won’t be real and I don’t have to accept it.’

The A&E staff tried to resuscitate Tommy, but it was too late.

That night in A&E, in February 2015, the couple were asked if they wanted a priest to Christen Tommy, and a ceremony was hastily arranged. Then they were taken to a bereavement suite.

‘I was in shock by that point,’ says Natasha. ‘When the staff were talking to me, it felt like I was floating in the air watching it all like a TV show. I cannot explain the pain of losing your baby — it’s indescribable.’ 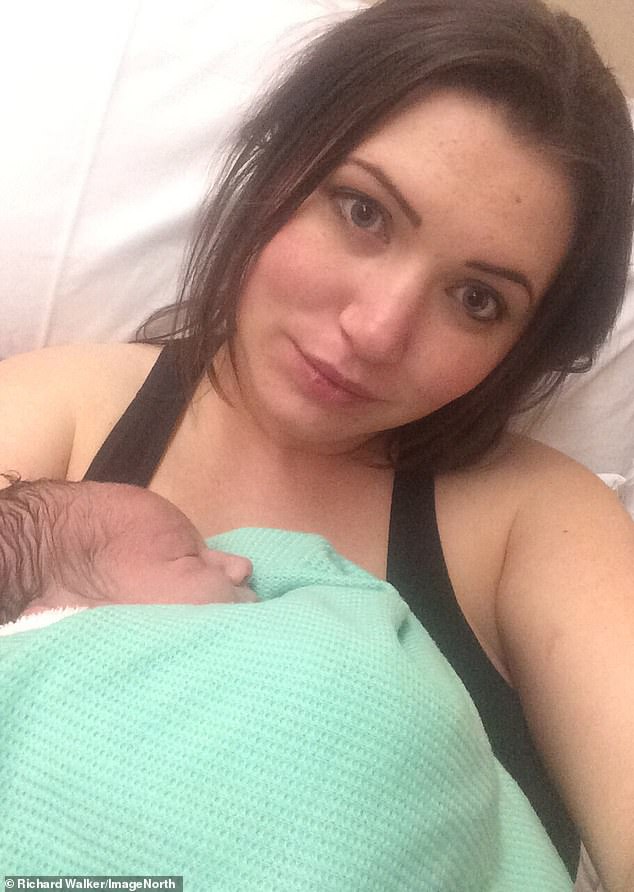 His anticipated arrival: Natasha Pye, from York, with baby Tommy shortly after his birth 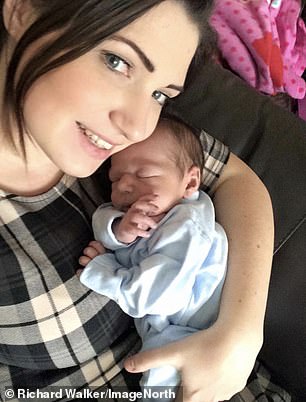 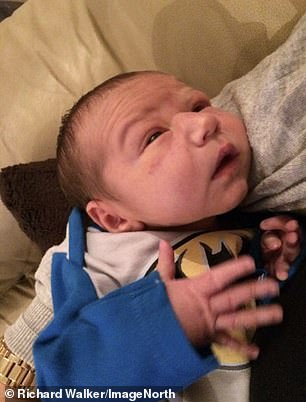 Missed opportunity: Natasha (pictured left with her baby), knows that Tommy’s death could have been prevented had he been given a simple screening test. Right, with his father

His parents would learn the following day that Tommy had a heart condition called transposition of the great arteries, where — due to abnormal development in the first eight weeks of pregnancy — the two main blood vessels leaving the heart are the wrong way round, so blood flows to the lungs and picks up oxygen but is then pumped back to the lungs instead of the body.

It’s unclear why this happens but it is treatable with surgery — however Tommy’s condition had gone undetected.

As Natasha and Andy now know, Tommy’s death could have been prevented had he been given a simple screening test.

The test is painless, gives a reading in ten seconds and doesn’t require expensive equipment or specialist training — in fact it uses technology that is already in every hospital and used to measure the oxygen levels in a patient’s blood.

Known as a pulse oximeter, this is a small clip, attached to a monitor, that fits over the end of a patient’s finger. It shines red light through the finger and obtains a reading according to how much light is absorbed by the blood, as this varies depending on how much oxygen there is.

‘It’s a widely available way of measuring oxygen levels in your blood — low levels can indicate a serious problem with the heart,’ explains Andrew Ewer, a professor of neonatal medicine at the University of Birmingham.

Today, a new campaign by the charity Tiny Tickers is calling for pulse oximeter testing in every maternity unit to check every newborn.

More than 1,000 newborns leave hospital every year with undetected and potentially life-threatening heart conditions — but screening babies for low oxygen levels could prevent this.

Low oxygen levels can point to a number of problems in the heart, such as issues with the structure, a narrowing of the main blood vessel, or a problem with the anatomy of the blood vessels, as in Tommy’s case. 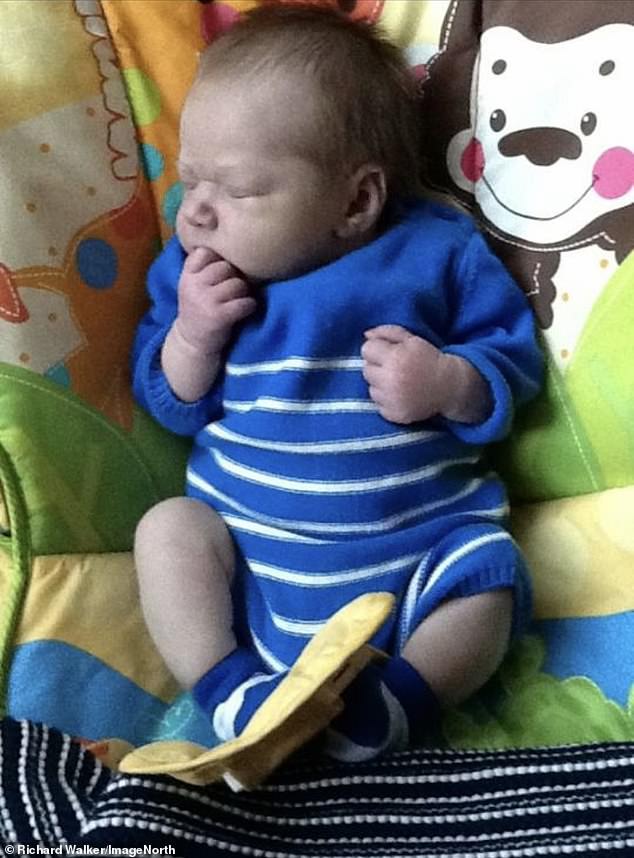 Tragic: Tommy had transposition of the great arteries, where — due to abnormal development in early pregnancy — the two main blood vessels leaving the heart are the wrong way round

If the screening test and further investigations reveal there is a heart defect, treatment would vary according to the condition, but may involve an operation or even a transplant.

In Tommy’s case, an operation would have been required to switch the arteries around to the normal positions.

Currently, heart defects in babies are picked up either during the 20-week pregnancy scan or through physical examinations shortly after birth (for example if the baby has a heart murmur or weak pulse, which may suggest a heart problem).

However, some babies still slip through the net: ‘We’re still missing half of cases on scans, and around a third in total,’ says Professor Ewer.

A problem with the umbilical cord was picked up at Natasha’s 20-week scan, but it was decided it was unlikely to point to anything serious, so no further checks were done. Nor were any concerns raised after Tommy was born.

‘I did say to the midwives and the GP that he was very blue and cold,’ says Natasha. ‘He also hardly cried — the night he died was the first time he really screamed.

‘But everyone kept saying he was fine and it takes some babies a while for their circulation to get going properly.’

It can take a little time, says Professor Ewer. ‘When babies are in the womb, their oxygen levels are naturally low, that’s why babies are a blueish colour when they’re born. Then the lungs and heart start adapting and most babies quickly get up to normal levels — but a small proportion take a little longer to adapt.’

The routine way to assess babies visually after birth, based on their colour, is just not reliable, he says. ‘A baby could have low oxygen levels and still look healthy.’

This is why there are calls for routine pulse oximeter tests on newborns. These would be done within 24 hours of birth — a reading of 90 per cent oxygen saturation or less warrants immediate investigation with blood tests, chest X-ray and ultrasound.

If the oxygen level is between 90 and 95 per cent, then the pulse oximeter test is repeated an hour or two later — if at the second test the reading is still low or has dropped, the baby will be sent for further assessments. 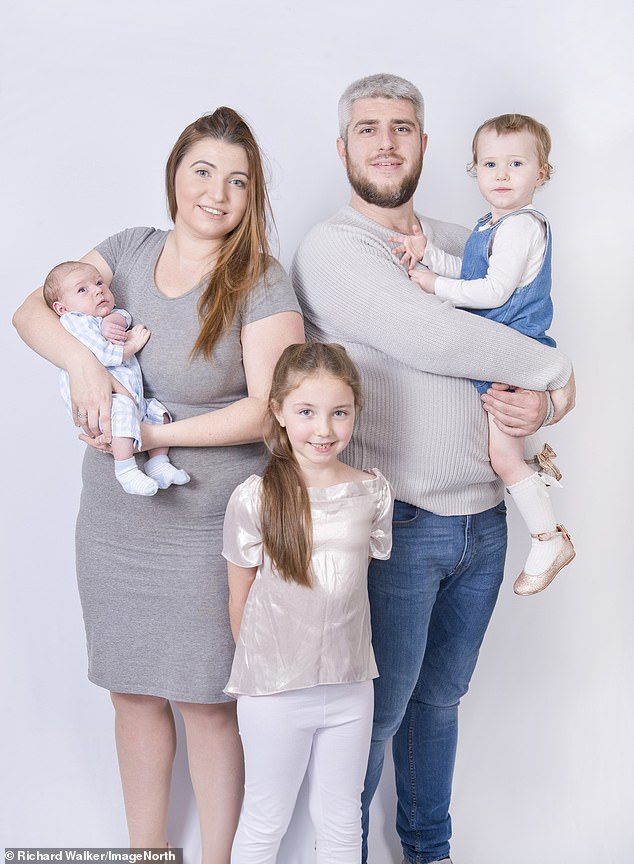 A landmark UK study in 2011, led by Professor Ewer, piloted the screening test in 20,000 newborns in six maternity units and found it increased the life-threatening heart defects picked up to 92 per cent.

And a review of 21 studies in the Cochrane Database of Systematic Reviews this year concluded that for every 10,000 apparently healthy newborns screened, six would have a serious, life-threatening heart problem. The pulse oximeter test could correctly identify five of those cases.

So why isn’t pulse oximeter testing part of mandatory newborn screening? ‘I’ve been asking this question for years,’ says Professor Ewer. ‘Since our 2011 study, other countries have been much quicker to adopt it. Every baby in the U.S. is screened, as well as Germany, Spain, Poland, and many of the Nordic countries.

‘The main concern here is that it may cause anxiety for parents because for some there will be nothing wrong. There are also concerns about subjecting a small number of healthy babies to needless further testing.

‘Yet it’s worth noting that in around 80 per cent of those cases, another condition is detected — such as an infection or a respiratory problem such as pneumonia. So if it can pick up other health problems, that’s a bonus.’

The Government’s National Screening Committee is reviewing the evidence for mandatory testing. In the meantime, Tiny Tickers is raising money to provide machines that would allow units to offer the screening voluntarily.

Around 40 per cent of UK hospitals do it but the charity estimates a further 330 machines, at a cost of £725 each, are needed so every maternity unit can follow suit.

York Hospital, where Tommy was born, started doing routine pulse oximeter testing several months after his death, after Natasha raised it with them.

‘I cried when they told me they’d saved two babies since bringing in the test. One had the same condition as Tommy,’ she recalls.

When her youngest son Albie was born in October, he was given the pulse oximeter test, which he passed — a bittersweet moment. And in a further twist, when Natasha and Andy bought Albie back into hospital at 12 days old, concerned he wasn’t well, it was a further pulse oximeter test that helped spot that Albie had a mild form of bronchitis, and so was kept in hospital for monitoring.

Fortunately, his parents were able to bring him home safe and well.

It was a mix of emotions seeing him have the pulse oximeter test, says Natasha. ‘The midwife was wonderful, she actually said to Albie: “This test got in because of your big brother. This is all because of your brother.” ’

Statins side effects: The four mouth disorders which could be caused by the drug

Diabetes type 2: A vegetable shown to help lower blood sugar by 10 percent – what to eat