In 2000, UCLA researchers discovered that human narcolepsy is caused by a loss of roughly 90 percent of the 80,000 brain cells containing hypocretin, also called orexin, a chemical messenger, or neurotransmitter, important in the regulation of sleep. Narcolepsy causes excessive sleepiness, sleep paralysis (a feeling of being conscious but unable to move), hallucinations and episodes of cataplexy, a partial or total loss of muscle control that is often triggered by a strong emotion such as laughter.

Narcolepsy affects about one in 2,000 to 3,000 people but can go undiagnosed for years, according to the National Sleep Foundation. The sleep disorder usually has its onset in childhood or adolescence.

In a new study, these researchers discovered that people addicted to heroin have, on average, 54 percent more hypocretin-producing neurons than do people without addiction. They confirmed, in mice, that opiates cause this increase. The increase in hypocretin cells lasted for as long as four weeks after discontinuation of the morphine treatment, well after morphine had left the animals’ bodies. 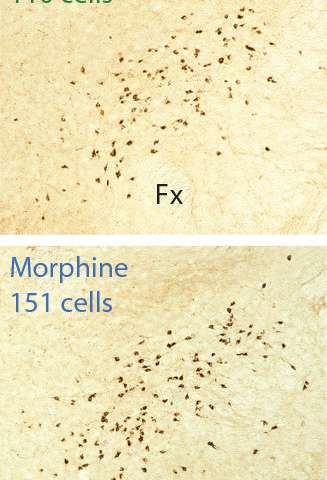 The continued production of hypocretin in mice, after discontinuing morphine treatment, suggests that humans may continue producing hypocretin after they have stopped using heroin. The researchers hypothesize that this hypocretin increase may be a factor in opiate craving.In addition, raising the number of hypocretin cells to near normal levels could potentially reverse narcoleptic symptoms in humans. However, further work in mice is necessary before this can be recommended as a treatment for narcolepsy in people. Next, researchers would like to find out if reducing “excess” hypocretin cells—or blocking the action of the hypocretin peptide that they release—could make long-term withdrawal from opiates easier and prevent relapse.

New comparative study provides insight on the rise of omicron

Type 2 diabetes: How to reverse symptoms and put yourself into remission