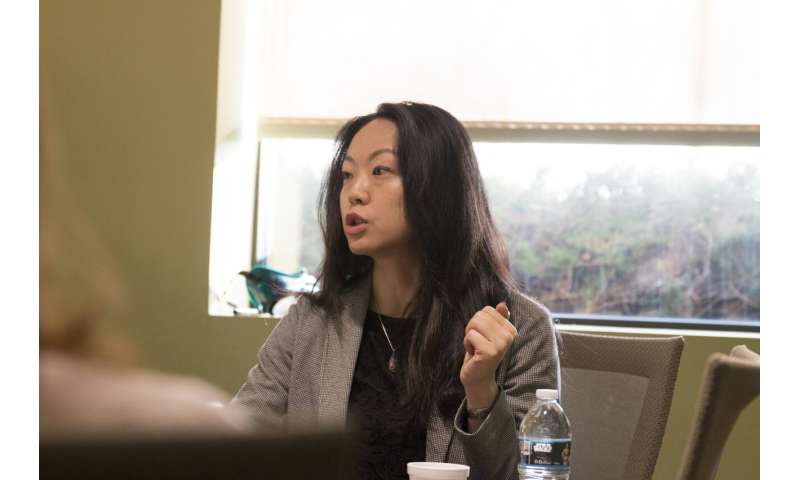 A recent report by Kessler researchers and clinicians described the effects of binocular occlusion in a patient with spatial neglect and severe posture impairment. The article, “Impact of eliminating visual input on sitting posture and head position in a patient with spatial neglect following cerebral hemorrhage: a case report,” was epublished on July 18, 2019 by Physiotherapy Theory and Practice. The authors are Peii Chen, Ph.D., of Kessler Foundation, Shannon E. Motisi, DPT, Christina Cording, DPT, Irene Ward, DPT, and Neil N. Jasey, MD, of Kessler Institute for Rehabilitation.

Complications of the hemorrhagic stroke of the right basal ganglia and surrounding area included marked right gaze, severe postural asymmetry, and inadequate responses to multi-step commands. These symptoms limited the ability of the 53-year-old woman to participate in therapy, and hindered the use of conventional paper-based tools for evaluating her for spatial neglect. Under these circumstances, the diagnosis of spatial neglect was based on the Kessler Foundation Neglect Assessment Process (KF-NAP), i.e., observation of her performance of daily life activities.

The team found evidence in the literature that indicated that some individuals performed better on tests of spatial neglect when visual stimuli were eliminated. They hypothesized that eliminating visual input would increase spatial awareness on the contralesional side, which in turn, would reduce the rightward deviations in gaze and posture. Improving posture and gaze could improve the patient’s ability to participate effectively in her rehabilitation.

To eliminate visual stimuli, the patient was blindfolded during therapy sessions, and the stroke team evaluated her behavior with and without binocular occlusion. They measured three outcome measures: head position, weight distribution, and the degree of contact between buttocks and therapy mat (buttock-mat contact). These measurements were recorded at baseline, during binocular occlusion, immediately after removal of blindfold, and three minutes after removal.

All three measures showed immediate improvement during binocular occlusion, with return to baseline at three minutes after the intervention. “We documented that while the patient was blindfolded, she sat up straighter, and her posture was more centered,” said Dr. Chen, senior research scientist in the Center for Stroke Rehabilitation Research. “It is unclear why visual stimuli was such a strong factor in this patient’s symptoms of spatial neglect,” she said.

Brain region discovered that only processes spoken, not written words

Here's How Mars Retrograde Will Affect Your Sex Life This Summer