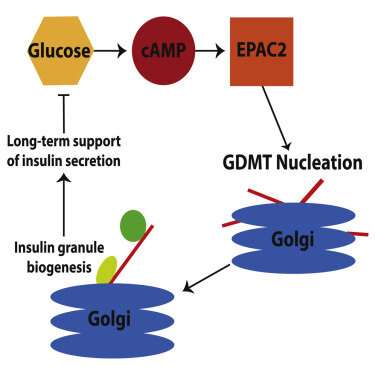 The failure of pancreatic beta cells to release appropriate amounts of insulin in response to rising blood glucose levels is a hallmark of type 2 diabetes.

During the past decade researchers have shown that microtubules—part of the cell’s cytoskeleton—play an important role in regulating the delivery of insulin granules to the cell membrane for secretion. Now Kathryn Trogden, PhD, and colleagues report that microtubules also are critical for the biogenesis of the granules themselves.

Microtubules, it turns out, are highly regulated by glucose acting through the ubiquitous messaging molecule cyclic AMP and its effector protein EPAC2. The glucose signal causes microtubules to disassemble and reassemble at the Golgi apparatus inside the cell, where insulin granules are formed.

Inhibiting EPAC2 blocked formation of new Golgi-derived microtubules and ultimately resulted in depletion of insulin granules in the beta cell, the researchers reported this month in the journal Current Biology.

What makes joints pop and crack and is it a sign of disease?

A Life After Cruelty: One Pit Bull Finds a Family to Love

Recall in case of purchase of land: risk of injury due to possible glass fragments in the Sauce

Brain Implant Puts the Brakes on Epileptic Seizures in Mice

Maisie Williams Opens Up About Her Mental Health: I Used To Hate Myself