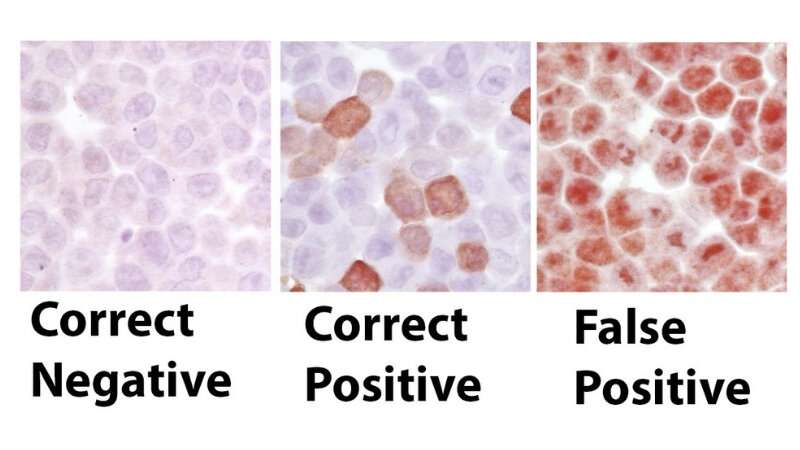 Scientists at the Johns Hopkins Kimmel Center say they have affirmed widespread inconsistencies in the use of a common laboratory procedure called immunohistochemical staining, and say the variations are making many laboratory experiments unreliable.

Their findings were outlined in a special issue of the Asian Journal of Urology.

In a review of papers published about the process and describing the use of antibodies for diagnostic and research applications in biomedical sciences, the investigators set out to document variations in the way scientists practice immunohistochemical (IHC staining).

“Overall, in our experience as journal editors and manuscript reviewers carefully reviewing at least 1,000 manuscripts we estimate, at a minimum, half of them contained potentially incorrect IHC staining results due to lack of best practice antibody validation,” says Angelo De Marzo, M.D., Ph.D., professor of pathology, urology and oncology and associate director of cancer research pathology for the Johns Hopkins Kimmel Cancer Center. “It’s a problem well known among the scientific community, but many journal editors are not checking this step before publishing affected papers,” De Marzo adds.

According to Karen Sfanos, M.S., Ph.D., first author of the study report and associate professor of pathology, urology and oncology at the Johns Hopkins University School of Medicine, IHC is extensively used in research laboratories throughout the world and in clinical pathology laboratories for patient care decision-making. They found that variations were most commonly caused by poor quality and/or lack of proper validation of quality of some antibodies provided by vendors prior to commercialization, and by human error. De Marzo and colleagues are calling for the adoption of industrywide standards for IHC practice that focuses on validation, especially when it comes to human tissue research. Antibodies are blood proteins produced in response to other proteins, called antigens. They are markers for a host of diseases, immune system activities, and reactions to treatments in people and in animal and test tube studies.

At the root of the problem, the researchers say, is a misunderstanding by many investigators and pathologists about the two general classes of antibodies used in IHC staining—clinical grade and research grade. Clinical grade antibodies are highly validated for consistency and reproducibility prior to their use in clinical settings in hospital-based pathology labs, but are limited in number (approximately 500 in use). On the other hand, the great majority of commercially available research grade antibodies used in research laboratories are not held to the same standards of validation as clinical reagents, and the number sold commercially has grown exponentially, with more than 3.8 million different ones available, according to the researchers.

“Results from inaccurate IHC tests published in the scientific literature lead to biased results and call into question the validity of those tests in many research laboratories. Much of our research depends on this even if is not clinical research. Although, it won’t kill a person if mouse experiment doesn’t turn out okay, there is still a cost. It has been estimated that over $2 billion per year is spent on research antibodies and a significant fraction of this amount, as well as researcher time, gets wasted on unreliable results,” says De Marzo. “The problem is so striking it is considered an important aspect of a larger overall problem in biomedical sciences, covered extensively in the press recently, and dubbed the “reproducibility crisis.”

A cornerstone of scientific research is the ability of investigators to repeat and reproduce findings of colleagues’ studies to either affirm or reject them. If there is unknown variation in test materials, it is virtually impossible to know whether scientists are comparing similar results or not.

While there has been a clear increase in vigilance by some commercial vendors regarding antibody validation, Sfanos said, the rapid increase in growth of commercial antibody companies and offerings makes oversight challenging.

The National Institutes of Health and some scientific journals are beginning to require researchers to provide details regarding what antibodies are used by investigators and what standards were used to verify the consistency and purity of these reagents used in their analyses.

“Some journal editors do not appear to realize the depth and extent of the problem. They don’t recognize there is a disconnect between the clinical grade antibodies and the research grade and that all commercial antibodies, even clinical grade, need to be validated in the end user’s laboratory before applying it to patient or animal samples in research studies,” says De Marzo.

Kidney replacement therapy rates have remained higher in men vs. women for decades

Ringworm: What is it and how can you get rid of it? Best treatment revealed

E-cigarettes used in 5 percent of U.S. homes with kids

4 Moms Show Their Postpartum Bodies in Photo: 'If It Helped Even One Woman, We Would Be Happy'