The Centers for Disease Control and Prevention (CDC) released a report earlier this year on the increase of tick-, flea- and mosquito-borne illnesses in the United States, but don’t panic.

Kurt Vandegrift, assistant research professor of biology at Penn State, works on emerging infectious diseases, and his lab studies ticks. Vandegrift’s lab is part of a National Science Foundation grant studying virus community dynamics. His research group is working to develop solutions that could help stop outbreaks of infectious diseases, like the ones mentioned in the recent CDC report, before they start.

“Mice that live in our houses and garages are reservoirs of some pretty nasty pathogens, like hantavirus,” said Vandegrift. “The only way viruses like these get discovered is if they get into humans and start causing illness.”

Zoonotic viruses, which can jump from animals to humans, like SARS, cost the global economy billions of dollars annually. Vandegrift and his colleagues aim to be more proactive and discover these viruses before they start causing illness in humans. According to Vandegrift, researchers are seeing more than two new emerging infectious diseases per year, most of which are viral, and most of which are zoonotic.

“Most of the zoonotic viruses we know about have come from rodents, so it is really valuable to know what viruses are in these rodents,” said Vandegrift. “It would also behoove us to know what viruses are in ticks because they are essentially like dirty needles, poking all this wildlife biodiversity and then coming to us, humans, for their second feeding, presumably exposing us to the viruses that were infecting their first host.”

Once the team has established the viral biodiversity, it aims to work out the dynamics within a host. Some of the viruses will be passed from tick to tick or mouse to mouse via “vertical transmission”—from mother to offspring—and some will be acquired by “horizontal transmission”—from other mice or, in the case of ticks, via blood meals upon hosts.

To determine which viruses are transmitted vertically, the researchers take engorged adult ticks from hunter-killed deer and raise them in the lab, allowing them to lay eggs. The researchers then sequence the mother tick, her eggs, and the larvae that hatch. Any viruses that are found in common are vertically transmitted. Other viruses that are found only in nymphs and adults must have come from elsewhere and are horizontally transmitted.

The same process is done with the mice, with the team testing both the mother and her offspring to determine what viruses they carry. The mice are then marked and can be retested in the future to see how the virus community assembles within an individual animal; the lab does the same with the ticks they study.

“Since we have sequenced a portion of each mother tick’s clutch, we know what viruses are present, and so we can attach these ticks with known viruses to mice with known viruses and see who gives what to whom,” said Vandegrift. “We also collect these now-engorged ticks as they fall off of the mice and can molt a portion of them into nymphs, which we then can attach to a pathogen-free lab variety of our mice to see if what they picked up can be transmitted onward in the nymphal blood meal.”

Ticks are responsible for transmitting Borrelia (Lyme disease), Babesia and anaplasma, which are known bacterial infections.

“There is no known rhyme or reason for how much bacteria is sucked up or spat out by the tick, and so we want to determine if these viruses play a role in this transmission,” said Vandegrift.

Through their method, the researchers think they will be able to test if viruses have a role in what bacteria is transmitted by the ticks. 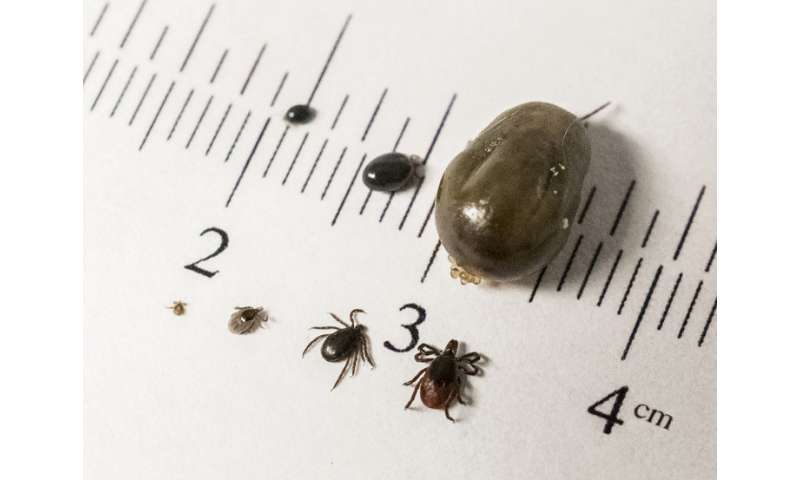 “Some of our larvae will pick up these pathogens during that first blood meal on our wild-caught mice. These three bacteria will then be transmitted to the lab mice, and we can measure how much relative to what viruses were also along for the ride,” said Vandegrift.

In addition to studying ticks and tick-borne diseases, Vandegrift also has some practical advice to help both people and pets avoid ticks in the first place.

Despite having found hundreds of ticks attached to him over the years, Vandegrift said he has never tested positive for Lyme disease, a fact that he attributes to three things: diligence, luck and permethrin—an insecticide that kills ticks on contact.

“Some people, like myself, react strongly to ticks and get very itchy even if they just walk on the skin, so I know nearly immediately that I have picked up an unwanted visitor,” Vandegrift said. “Many people do not notice, but there are some things you can do to help avoid tick bites, like wearing light-colored clothing to help you see the ticks. If you are in brush, constantly check yourself—particularly your legs. Wear DEET repellants or permethrin. If you do use permethrin, do not get it in water, however, as it will kill more than just ticks, and you should be aware that it will also kill bees.”

The blacklegged tick, commonly known as the deer tick, now abundant in Pennsylvania, carries the bacteria that causes Lyme disease. In fact, Pennsylvania ranks No. 1 in instances of Lyme disease in the country. The vast majority of people are diagnosed as positive for Lyme disease in June and July from bites that likely occur from late April through June, when ticks are in the nymph stage.

“Ticks have three stages of life,” said Vandegrift. “The second stage of development—the nymph stage—poses the most significant threat of transmission of disease-causing bacteria to people. Ticks in the nymph stage are small, and they could be feeding on a person and go unnoticed for a more extended period compared to an adult tick due to their size. Ticks do not immediately transmit the bacteria that causes Lyme disease, so a person has time to check themselves over.”

Vandegrift said it’s important to also check our four-legged friends, as pets can be particularly good at collecting ticks, and to consult a veterinarian for recommended preventive treatments that can be used to safeguard your pet’s health and help prevent ticks from being carried into the home.

If you do find that a tick has attached to you or a pet, Vandegrift said the best way to remove it is with a fine-tipped pair of tweezers.

Girl, 12, returned 'to a baby' after catching a virus on a school trip

A concussion can cost your job, especially if you are young and well educated

Blood pressure readings should be taken from both arms, experts say

If parents work long hours, children are rather thick