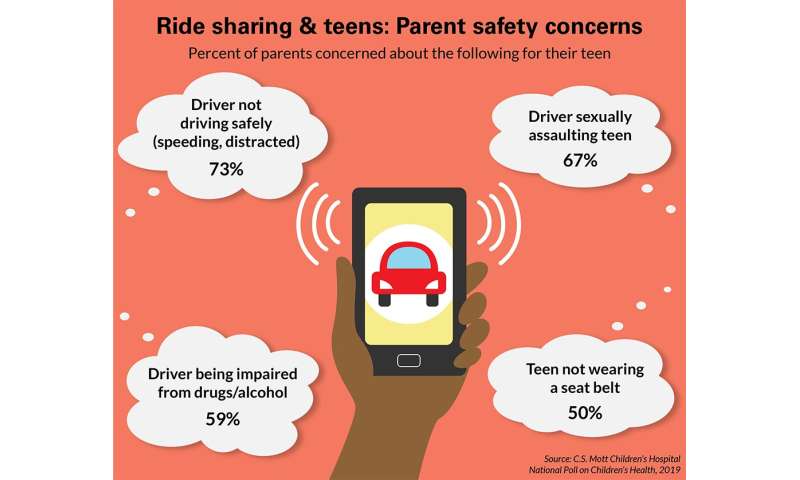 As teens prepare to leave home for college or live on their own in a new city, many may also be using ride sharing services for the first time—and that raises safety concerns for many parents—a new national poll suggests.

One in three parents say their 18-year-old has used a ride sharing service, either alone or with another teen, according to the C.S. Mott Children’s Hospital National Poll on Children’s Health at the University of Michigan. Parents’ top concerns involved driving safety and risk of sexual assault by a driver.

And despite rules prohibiting unaccompanied minors from getting a lift through such services, one in eight parents (13 percent) reported their teen aged 14-17 had used one.

“Ride sharing services are increasingly used as a convenient way to get around for adults and may potentially also be an attractive option for teens with busy schedules and social lives,” says poll co-director and Mott pediatrician Gary Freed, M.D., MPH.

“Company policies prohibit minors from riding without an adult, but these rules can be difficult to enforce and it may be challenging to verify a rider’s age.”

“Sometimes parents and teens may find themselves in a bind for transportation and look for ways around the rules,” Freed adds.

Parents’ top concern was that the driver would not be driving safely, with three in four parents polled worried about issues such as speeding or a driver being distracted by a phone. Over half of parents were also worried about the ride share driver being impaired from alcohol or drugs while half were concerned that their teen would not wear a seat belt.

Two thirds of parents also shared concerns that a ride share driver might sexually assault their teen. This concern was more common among parents for their daughters than for their sons (79 percent versus 55 percent) and for teens aged 14-17 compared with 18-year-olds (69 percent versus 58 percent.)

Ride sharing safety was recently in the news after a tragic case involving a South Carolina college student who was killed after mistakenly getting into what she believed was her Uber ride. A bill has since been introduced in the South Carolina Legislature to require Uber and Lyft drivers to use illuminated signs marking their vehicles.

In a limited number of communities, “kid-friendly” ride sharing services have also been launched, usually involving a specific pool of drivers from which parents can choose to interview and select for future rides.

“If teens do use a ride share service, families should discuss practical and important strategies to stay safe,” Freed says.

Parents should go over safety rules with teens preparing to use any kind of ride sharing or ride hailing service that involves getting into a car with a stranger, Freed says. Parents should instruct teens to always match the driver’s description, car and license plate to what was provided, in addition to traveling with a friend and not alone, being alert and aware of surroundings and paying attention to whether the driver is being safe and going to the right place.

Teens should know that if they feel they are in any danger, they should ask the driver to stop the car or call 911.

Parents may also consider using technology to track the route of their teen to make sure the ride goes as planned, Freed notes.

“Before teens use any ride sharing service, parents should discuss the potential dangers and develop a strategy with their teen,” Freed says.

The biggest mistake you’re making when washing your face masks

Time to cook is a luxury many families don’t have

Identifying a gene that could explain disparity in COVID-19 effects

Children born through IVF may have higher risk of hypertension

Do I have a drinking problem, or does everybody else?