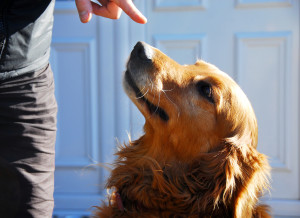 Facial expressions in dogs are often similar in humans. Dogs that are tense keep their mouths tightly closed. So do humans in this state of mind. Dogs that are relaxed often have a slightly open mouth with no tension in the flews. Humans that are feeling relaxed have a very similar facial expression. Happiness that is more than a relaxed state leads to a smile. In humans this means bared teeth, from a small amount to a large amount. In dogs, bared teeth typically mean aggression. But with family, in a trusting comfortable atmosphere, a bared teeth mouth with relaxed flews usually means a smile. There are numerous versions of a dog smile and it behooves the savvy dog owner to learn as much about dog body language as possible in order to properly communicate with their dogs.

Learning about dog body language doesn’t sound like it would have anything to do with dogs recognizing human facial expressions but it actually has a lot to do with it. The fact is that the more of a connection that a dog feels towards their main human, the better their communication skills will be with all humans. They will learn to recognize and read normal human facial expressions and trust what they have learned thus far. Dogs that have less of a stabilized connection with humans may be able to recognize some facial expressions but they will have a harder time trusting what they see if there has been less consistency in their experiences. This happens because less stability in their typical relationships with humans means that the negative associations often outweigh the positive. Humans are unpredictable to dogs with these experiences. So not trusting what they see is survival instincts at their finest.

There are differing views on what all a dog is recognizing when they seem to recognize a facial expression. When I asked this question of a wide variety of dog lovers from behavior professionals to loving dog parents, I got varying answers. Among the responses was the thought that perhaps they are recognizing the entire body language picture as a whole. I believe that they absolutely do that. But I also believe that facial expressions are very telling and dogs have learned what ours mean. Of course, science has already shown us that they are so much better at getting us than we think they are.

For example, a study led by researcher Miho Nagasawa of Azabu University who wrote in the July 2011 issue of Animal Cognition magazine explained that five dogs were trained using photos of their owners. Some of the photos had their owners smiling and some showed them with a neutral expression. They were trained to touch their nose to the smiling photos. Those five dogs were then shown photo pairs of smiling and neutral expression faces that were unfamiliar to them, as well as faces of their owners. When shown photo pairs of strangers who were the same gender as their owners, the dogs selected the smiling faces more often than would be randomly expected.

In an even more recent study, published in the journal of Current Biology in February of 2015, co-author Dr. Ludwig Huber, head of the University of Veterinary Medicine in Vienna, Austria, states that the study “demonstrates that dogs can distinguish angry and happy expressions in humans, they can tell that these two expressions have different meanings, and they can do this not only for people they know well, but even for faces they have never seen before”. 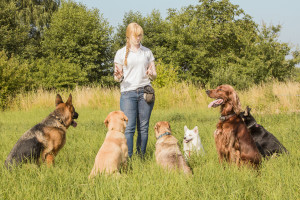 The researchers found that the dogs discriminated between the two very different facial expressions more often than a random choice would indicate. The dogs rewarded for choosing happy faces during this training seemed to learn this faster than the dogs rewarded for choosing angry faces. The prevailing thought on this result among the researchers was that many dogs (as do people) have negative associations attached to angry faces.

In conclusion, dogs are amazingly insightful creatures. They have adapted to our communication methods by their own choose. It would be in the best interests of both us as their caretakers and them as our charges, to communicate effectively on both sides of the equation. Become an educated observer of your dogs so that you can better communicate!

Debby McMullen is the author of the How Many Dogs? Using Positive Reinforcement Training to Manage a Multiple Dog Household, which has also been translated into German. She owns Pawsitive Reactions, LLC in Pittsburgh, PA. Her specialty is behavior consultations with an emphasis on multiple dog households as well as aggression. She is certified in behavior consulting through the International Association of Animal Behavior Consultants. She is a long time professional member of the APDT as well as a CGC Evaluator for the AKC.

She presents multiple dog seminars upon request and has several webinars available online on the subject of multiple dog households.

Debby has been training dogs since 1998, starting at the shelter she volunteered at. She turned her hobby into a vocation in 2003. Debby also ran her own Doberman rescue for nearly 15 years before taking a less active role in the rescue world.

Debby’s training philosophy is rewards based, with a strong focus on modern scientifically proven methods. Debby believes in teaching dogs to make better decisions and improving the relationships between humans and the canines in their care.

Debby currently lives in Pittsburgh, PA with 2 dogs; Trent a Pit Bull mix, and Kenzo, a Caucasian Ovcharka. She is looking to add a female dog to the family in the near future.

Your Support Makes a Lifesaving Difference Every Day!

Mindfulness at work: A little bit goes a long way

5 Healthy Ways To Deal With A Breakup