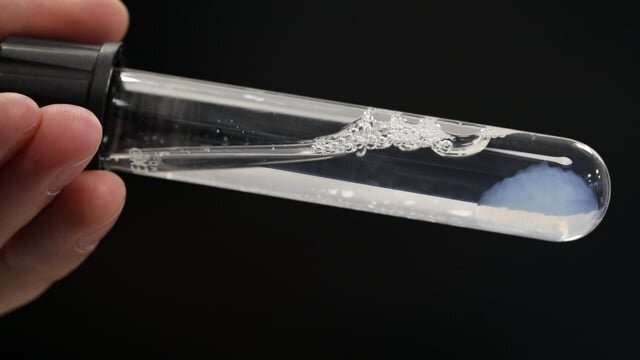 EPFL spin-off Readily3D has developed a novel system that can print biological tissue in just 30 seconds. The firm’s technology is being used in a large-scale European project to develop a living model of the pancreas for testing new drugs.

First you see it as a transparent shape on a computer screen—a small electronic replica of the human pancreas. Then just 30 seconds later the tissue is printed out on a bioprinter, blood vessels and all, from a sample of human stem cells. This amazing feat is possible thanks to revolutionary new technology created at EPFL’s Laboratory of Applied Photonics Devices (LAPD) and further developed by Readily3D. Their technology was recently selected for use in the EU-funded Enlight project, which aims to develop a reliable living model of the pancreas for testing diabetes medications.

The pancreas is a vital organ located just behind the stomach. It serves several functions, such as producing enzymes and bicarbonates essential for digestion and secreting a variety of hormones—including insulin, which is the hormone that regulates blood sugar levels. As a result, pancreatic disease often leads to diabetes since the damaged cells can no longer produce the insulin the body needs.

Over 450 million adults around the world suffer from diabetes, including 60 million in Europe. In Switzerland, 4.4% of the population reported in 2017 having been diagnosed with the disease. And the number of patients is growing worldwide. Diabetes is the second-leading cause of amputation (behind accidents) and increases the risk of a heart attack or stroke by a factor of eight and of kidney failure (requiring dialysis) by a factor of nine. Diabetes is also the leading cause of blindness among adults. Methods for improving diabetes diagnosis and treatment could thus bring major benefits to public health.

The bioprinting technology developed at EPFL uses a biological gel containing a patient’s stem cells. A laser is applied to the gel to solidify it through polymerization. The location and intensity of the laser beam can be controlled in order to solidify only those areas of the gel needed to form the desired tissue. “One of the main advantages of our method is that it can create tissue in a single block, making it particularly useful for printing soft tissue like organs,” says Paul Delrot, the CTO of Readily3D.

There are numerous benefits to bioprinted tissue. It can be tailor-made since it’s created from a patient’s own stem cells, and it eliminates the need to conduct animal testing. “What’s more, patients won’t have to try out an array of drugs, some of which may have unpleasant side effects, before finding the right one for them,” says Damien Loterie, the CEO of Readily3D.

A woman donated 470 litres of breast milk. Know about her rare condition

I am 20 years old and have gone through puberty. I am taller, and my voice has changed but I have very little hair on my entire body. Is this normal?