London commuters are exposed to superbugs en route to WORK: Study finds half of bacteria on the city’s door handles, escalators and train station gates are resistant to antibiotics

Antibiotic-resistant bacteria are lurking on around half of door handles, toilets and lift buttons across London, a study has found.

Scientists who swabbed regularly-touched surfaces in the city discovered almost 300 of samples could cause infections which medicine would struggle to cure.

Most of these were found in hospitals but there were also resistant bacteria living on escalators in shopping centres and on train station ticket gates.

As the threat of bacteria evolving to be untreatable with standard medications, scientists find there are fewer and fewer places the organisms can’t be found.

The research comes less than week after another study found resistant bacteria thriving in the city’s bodies of water including the Thames and Regent’s and Hyde parks. 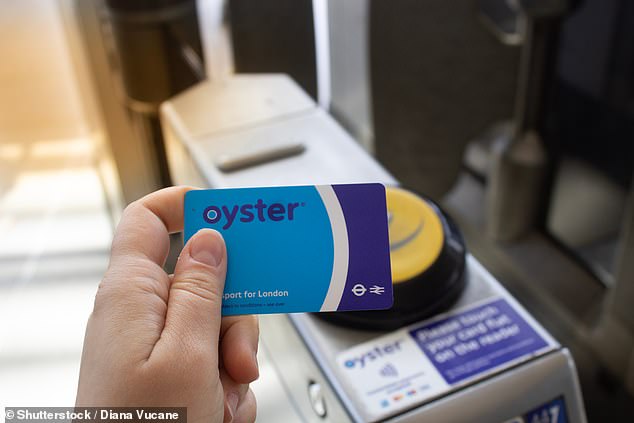 Train station gates, toilets, door handles and escalator handrails were among the places where scientists found bacteria which had evolved to be resistant to bacteria (stock image)

Some 418 of these were taken from East London and the remaining 182 from the west – there were proportionally more resistant strains in the east.

The scientists said the bacteria strains they found – all of which were different forms of staphylococcus – were responsible for ailments ranging from ‘minor skin infections to life-threatening diseases’.

And 46.8 per cent of the swab samples (281) were ‘multidrug resistant’ – able to survive more than one commonly used antibiotic.

‘General public areas and common public areas in hospitals in London can be reservoirs for multidrug resistant staphylococci,’ the researchers, led by PhD student Rory Cave, wrote in their paper.

Antibiotic resistance has been listed as one of the most dangerous threats to human health by the World Health Organization.

It ranks alongside climate change, cancer and infectious diseases such as Ebola in the WHO’s priorities because it could make once-treatable infections like gonorrhoea life threatening.

More than 80 per cent of the London samples showed signs of resistance to penicillin, one of the most commonly prescribed antibiotics.

Other widely-used medications, including fusidic acid which is used to treat skin infections, and erythromycin, which treats chest infections, had high proportions of bacteria which may not respond to them – 76 and 37 per cent, respectively.

The more often a medicine is prescribed, the more opportunity bacteria have to develop resistance against it, but also the graver the consequence if it stops working.

Hospitals contained the highest levels of resistant bacteria, with 49.5 per cent of all strains resistant to more than one drug.

‘Previous studies have shown that there is a linkage in population density to the development of antibiotic resistance.’

The finding comes after antibiotic genes were found in the River Thames, Regent’s Canal, a pond in Regent’s park and the Serpentine Lake in Hyde Park.

University College London researchers found traces of DNA which had filtered into the environment from treated human waste and had moved into public spaces.

The scientists even suggested there could be antibiotic-resistant DNA in people’s drinking water – although they hadn’t tested that.

Dr Lena Ciric said: ‘This shows that more research is needed into the efficiency of different water treatment methods for antibiotic removal, as none of the treatments currently used were designed to incorporate this.

‘This is particularly important in the case of water bodies into which we discharge our treated wastewater, which currently still contains antibiotics.

‘It is also important to look into the levels of antibiotics and resistant bacteria in our drinking water sources.’

The East London team’s research was published in the journal Scientific Reports.

WHAT IS ANTIBIOTIC RESISTANCE?

Antibiotics have been doled out unnecessarily by GPs and hospital staff for decades, fueling once harmless bacteria to become superbugs.

The World Health Organization has previously warned if nothing is done the world was headed for a ‘post-antibiotic’ era.

It claimed common infections, such as chlamydia, will become killers without immediate answers to the growing crisis.

Bacteria can become drug resistant when people take incorrect doses of antibiotics, or they are given out unnecessarily.

Chief medical officer Dame Sally Davies claimed in 2016 that the threat of antibiotic resistance is as severe as terrorism.

Figures estimate that superbugs will kill ten million people each year by 2050, with patients succumbing to once harmless bugs.

Around 700,000 people already die yearly due to drug-resistant infections including tuberculosis (TB), HIV and malaria across the world.

Concerns have repeatedly been raised that medicine will be taken back to the ‘dark ages’ if antibiotics are rendered ineffective in the coming years.

In addition to existing drugs becoming less effective, there have only been one or two new antibiotics developed in the last 30 years.

In September, the World Health Organisation warned antibiotics are ‘running out’ as a report found a ‘serious lack’ of new drugs in the development pipeline.

Without antibiotics, caesarean sections, cancer treatments and hip replacements would also become incredibly ‘risky’, it was said at the time.

Twins given just a 10% chance of survival celebrate first birthday

Plasmonics in Biology and Nanomedicine

Multivitamins do not promote cardiovascular health