A cancer-stricken mother is fundraising for a controversial treatment not available on the NHS in the belief it will help her live longer.

Katherine Oliver, 64, was first diagnosed with breast cancer in 2003. After undergoing radiotherapy, she was told the disease had gone, only for it to return four times over the next 13 years.

By May 2018 the cancer had reached Ms Oliver’s bones, lungs and liver. Although she tried chemo, the disease progressed, leaving her unable to stand or look after herself.

With doctors warning there was little more they could do, Ms Oliver came across a woman on Facebook who claimed she cured her stage-four cancer with insulin potentiated therapy (IPT).

Ms Oliver, of Hampton, London, opted to skip conventional treatment and paid £50,000 ($63,670) for 10 rounds of the unproven therapy, which delivers insulin at the same time as chemotherapy, at a clinic in Istanbul.

The former lawyer claims IPT shrank her tumours by 90 per cent. Having exhausted her savings, she is appealing to the public to help her pay for the therapy.

But cancer experts warn there is ‘no strong evidence’ IPT works, adding it could interfere with treatments and be harmful. They also said it is dangerous if patients skip conventional therapies that are known to be safe and effective. 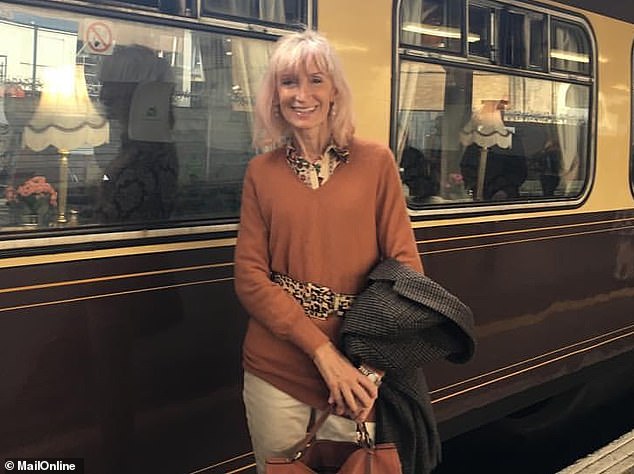 Katherine Oliver (pictured in June 2017) claims a controversial treatment that is not available on the NHS has shrunk her ‘terminal’ cancer by 90 per cent. However, it comes at a cost of £50,000 ($63,670) for 10 rounds of treatment and Ms Oliver has ‘exhausted her savings’ 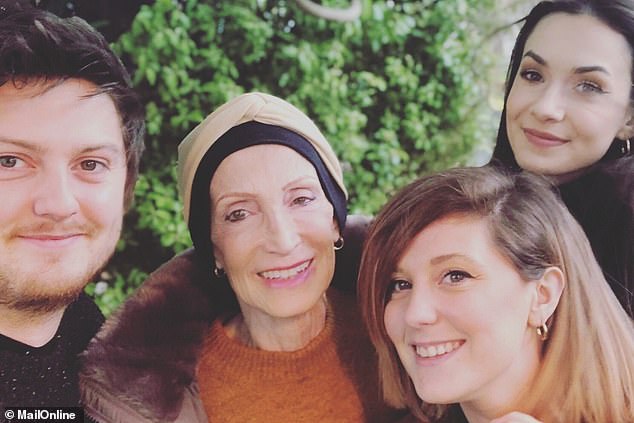 Ms Oliver was first diagnosed with breast cancer in 2003. After undergoing radiotherapy, she was told the tumour had gone, only for it to return four times over the next 13 years. She is pictured last May with her daughter Tara (second from right), son Laurence and his fiancée Bibi

Ms Oliver underwent six weeks of radiotherapy at Parkside Hospital in Wimbledon after being diagnosed with breast cancer 16 years ago.

The mother-of-two believed she had beaten the killer disease until she found a lump nearly a decade later in January 2012.

She then underwent a double mastectomy, as well as five months of preventative chemotherapy ‘in case malignant cells were floating around’.

Ms Oliver, mother to Tara, 30, and Laurence, 28, said: ‘I was incredibly nauseous. I could barely stand, only stagger from my bedroom to my bathroom.’

Even when her chemo ended and things seemed to be looking up, Ms Oliver claims she battled with her balance, memory and energy levels for four years.

Things then took a dramatic turn for the worse when Ms Oliver felt yet another lump in her chest in September 2016.

An MRI scan revealed the cancer had spread throughout her body, causing her odds of survival to plummet.

‘Doctors gave me two-to-three years,’ Ms Oliver said. ‘They said it was treatable but not curable.’

Ms Oliver then began five months of chemo at the Royal Marsden in London. This initially caused the tumours to shrink from her liver, only to return 12 weeks later.

Although this course was ‘a lot kinder than the last one’, anti-hormonal drugs left Ms Oliver feeling ‘punch drunk’.

Anti-hormonal medication can be effective if a patient’s breast cancer is stimulated by the hormone oestrogen. The drugs block the effects of oestrogen, inhibiting the tumour’s growth.

With her medication seeming to have little effect, Ms Oliver opted to stop the treatment altogether around July last year.

Unable to look after herself, she relied on her two children to push her around in a wheelchair. 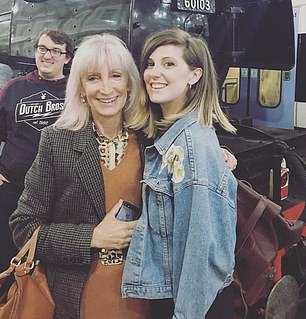 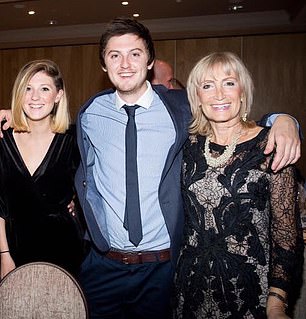 Pictured left with her daughter in June 2017, Ms Oliver discovered in May last year the cancer had reached her bones, lungs and liver. Desperate, Ms Oliver (pictured right with her children in September 2016) came across a woman who claimed she cured her stage-four cancer with insulin potentiated therapy while carrying out her own research in May 2018

Desperate, Ms Oliver came across a Facebook group where a patient claimed she cured her advanced cancer with IPT.

IPT involves administering insulin to cancer patients at the same time as chemotherapy.

Administering insulin supposedly causes the hormone to attach to receptors on the cancer cell membranes. The theory states chemo then gets ‘channeled’ inside cancer cells, killing them.

When Ms Oliver asked her doctors about the treatment, she claims they had ‘no idea’ what she was talking about.

Ms Oliver got in touch with medics overseas and later flew to Turkey for treatment in September – despite doctors warning her she was too weak to fly.

During her first visit to the clinic in Istanbul, Ms Oliver was treated for 12 days, which ‘knocked her for six’.

Unable to cope with the exhaustion, her second round of treatment lasted just 10 days, which left her feeling ‘much better and able to do things for herself’. 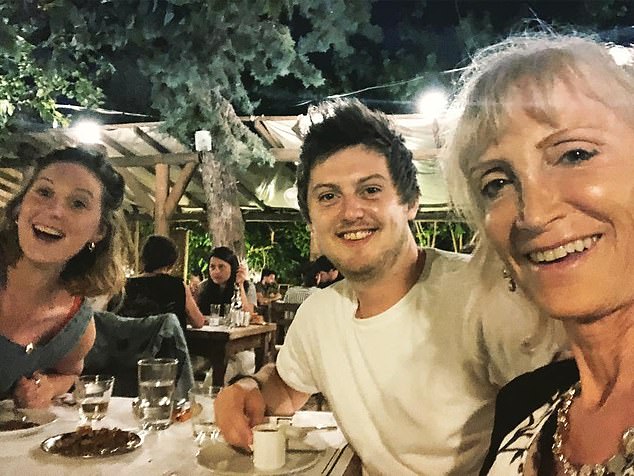 Ms Oliver paid £50,000 for ten rounds of treatment in Istanbul. She felt ‘much better and able to do things’. She is pictured on holiday with her children in May last year in Kas, Turkey 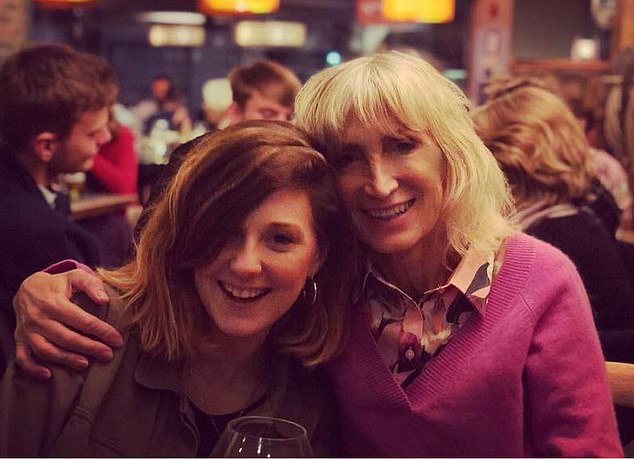 Having spent all her money, Ms Oliver (pictured with her daughter on Mother’s Day last year) is appealing to the public to help her pay for the therapy that could give her a ‘long life’

Ms Oliver continued on this regimen until April this year, flying out for three days at a time every two weeks.

When MRI scans were carried out back in the UK, they allegedly revealed her cancer had virtually vanished.

‘Similarly, the metabolically active mediastinal (the area of the chest that separates the lungs) lymph nodes have resolved.’

WHAT IS INSULIN POTENTIATED THERAPY?

This supposedly allows for lower doses of chemo due to insulin allowing more of the drug to enter cancerous cells.

The treatment is not available on the NHS and has ‘never been proven experimentally’, according to The Cancer Association of South Africa.

The Memorial Sloan Kettering Cancer Center states ‘there is no data to support the claim IPT treats cancer’.

Advocates for the alternative treatment claim it saves healthy tissue from the damaging effects of chemo.

Insulin supposedly attaches to cell-membrane receptors, which are said to be 16 times more concentrated on cancerous cells than normal ones.

The theory states chemo gets ‘channeled’ inside cancer cells, killing them and reducing, or eliminating, side effects.

Insulin is a hormone that plays a key role in the regulation of blood-sugar levels.

It does this by signalling to the liver, muscles and fat to take up glucose from the blood to be used for energy.

However, if a diabetic administers too much insulin, it can cause their blood-sugar levels to fall dangerously low, known as hypoglycaemia.

It can also cause patients to go into a diabetic coma, which can be fatal.

The notes added: ‘The previously noted metabolically active infiltrates in both lungs have also shown an improvement.

‘Appearances are in keeping with an excellent response to treatment with complete resolution of most sites of disease.’

Ms Oliver claims the only treatment she received between the scans was IPT.

She adds her consultants at the Royal Marsden are ‘astounded and enthusiastic about her future’.

However, they cannot prescribe treatments outside of official guidelines. IPT is not approved on the NHS.

Watchdogs at the National Institute for Health and Care Excellence, which guides the NHS on which drugs to prescribe, declined to say why.

Having exhausted her savings, Ms Oliver turned to her friends and family for help, but that money has now also dried up.

‘I have spent every penny I have,’ she said.

‘I’m so short of money now but it’s a life and death situation. I realised how much I want to live.’

After the side effects and poor results Ms Oliver had with chemo in the past, she is shunning the conventional treatment for a cocktail of ‘alternative cancer’ drugs.

These include statins, metformin and an anti-parasitic medication, which she firmly believes ‘stop her tumour metabolising’. However, none of them are proven to work and the evidence is murky.

Since coming off IPT, Ms Oliver claims she quickly took a turn for the worse and has already lost her appetite.

Although she has not ruled out having chemo again as a last resort, Ms Oliver says it would only buy her a bit more time.

‘I believe I can live a long life if I can continue to get this treatment in Istanbul,’ she said.

However, oncologists warn the alternative treatment is ‘unproven’ and could have ‘significant risks’.

‘Unproven alternative therapies like this can be dangerous, as they could interfere with ongoing treatment and cause serious harm.

‘Or people may even opt for these methods instead of conventional therapies that have been proven to be safe and effective.

‘There can also be eye-watering costs, which can leave cancer patients and their families in a very difficult financial position.

‘Everyone has the right to make their own decisions about treatment, but it’s vital they fully understand what conventional treatment can offer and the significant risk of substituting these with unproven therapies.’

Dr Justin Stebbing, from the department of surgery and cancer at Imperial College London, told MailOnline of his concerns over IPT.

He said: ‘I’d like to see IPT evaluated in clinical trials but there isn’t the data. Ms Oliver may be seeing benefits due to her past chemo having a “lingering effect”.

‘I am of the view IPT would cause harm via hypoglycaemia, which is life-threatening. I always treat people as if they were my mother or sister – and I’d be scared.’

Anyone wanting to donate to Ms Oliver can do so on her fundraising page here.

Reassuring Data on Impact of Mild COVID-19 on the Heart

Many hospitals in Germany already use the public cloud, study finds