Some antibiotics linked to a higher risk of colon cancer – but others may cut rectal cancer risks, study suggests

But the pills also lower the chances of rectal cancer, according to the research.

The Johns Hopkins scientists say the changes in risk depend, to some extent, on the type and class of drug prescribed.

Because the effects of antibiotics seem to vary along the length of the colon – from the bowl to the rectum – the researchers believe that the populations of gut bacteria may vary along the organ, too.

The research team said their findings reiterate the importance of ‘judicious’ prescribing, not only to preventing antibiotic resistance, but potentially to cutting cancer risks. 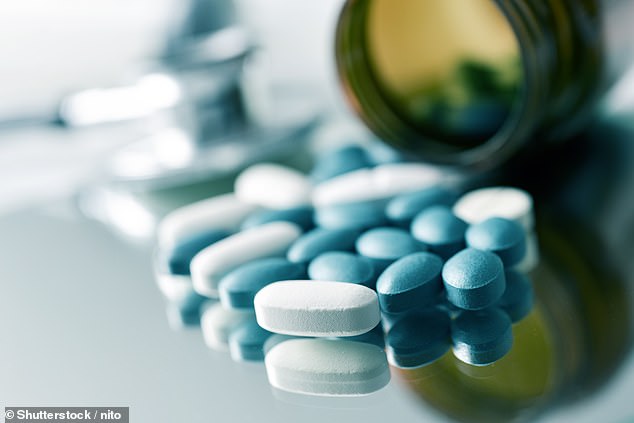 Depending on what type patients took in the past, antibiotics may raise bowel cancer risks – but lower rectal cancer risks, a new observational study suggests

In 2010, patients around the world took an estimated 70 billion doses of antibiotics -the equivalent to 10 doses each.

Antibiotics have a strong and long lasting impact on the gut microbiome, altering the balance of helpful and harmful bacteria by killing off much of both types.

The researchers wanted to find out if taking the pills might affect bowel and rectal cancer risks, and how.

They drew on data submitted to the Clinical Practice Research Datalink (CPRD) in the UK between 1989 and 2012.

The database contains the anonymized medical records of around 11.3 million people from 674 general practices – around seven percent of the UK population.

The researchers collected prescribing information for more than 28,900 patients diagnosed with bowel or rectal cancer during an average monitoring period of eight years, and for 137,077 patients, matched for age and sex, who didn’t have cancer.

About 70 percent of the bowel cancer patients had been prescribed antibiotics in the years prior their cancer diagnoses.

Only slightly fewer of the participants that did not develop cancer – 68.5 percent – had been prescribed antibiotics.

Nearly six out of 10 study participants had been prescribed more than one class of antibiotic.

Those with bowel cancer were more likely to have been prescribed antibiotics, while exposure levels were comparable among those who developed rectal cancer.

Study co-author Dr Cynthia Sears, of The Bloomberg Kimmel Institute for Cancer Immunotherapy in the US, said: ‘The association between bowel cancer and antibiotic use was evident among patients who had taken these drugs more than 10 years before their cancer was diagnosed.

‘But patients with rectal cancer were less likely to have been prescribed antibiotics targeting aerobic bacteria.’

‘Cancer of the proximal colon – the first and middle parts of the bowel – was associated with the use of antibiotics targeting anaerobes, when compared to people without cancer.’

But the same wan’t true of cancers that trike the furthest, or distal, end of the colon.

‘After taking account of potentially influential factors, such as overweight, smoking, and moderate to heavy drinking, cumulative use of antibiotics for a relatively short period, 16-plus days, was associated with a heightened risk of bowel cancer, with the impact strongest for cancers of the proximal colon,’ Dr Shears said.

‘The reverse was true for rectal cancers, where antibiotic use exceeding 60 days was associated with a 15 per cent lower risk compared with no use.’

Among those who had only been prescribed one broad type of antibiotic, penicillins were the mot consistently and closely associated with higher risks for bowel and

She said when the analysis was restricted to patients who had been prescribed only one class of antibiotic, as opposed to none, penicillins were consistently associated with a heightened risk of bowel cancer of the first (proximal) section of the colon.

Ampicillin/amoxicillin was the penicillin most commonly prescribed to those patients.

The lower rectal cancer risks seen in some patients prescribed antibiotics were in those who’d been prescribed tetracyclines.

Dr Sears said it was an observational study, so the research can’t establish cause.

But she said the findings suggest ‘substantial’ variation in the size and pattern of antibiotic effects along the length of the bowel.

Dr Sears added: ‘Whether antibiotic exposure is causal or contributory to colon cancer risk, our results highlight the importance of judicious antibiotic use by clinicians.’

Busy Mom of Two Opens Up About the Fitness Program That Helped Her Lose Nearly 100 Lbs.

Microdosing Psychedelics May Boost Mood and Focus. But What Are the Drawbacks?

Not a myth: cow’s milk and beef as a cancer trigger

A new role for neurogenesis

​This Is When You're Most Likely to Cheat In Your Relationship