Youngsters who spend hours scrolling were more than twice as likely to stay up past 11pm on a school night.

They are also more likely to wake up in the middle of the night and struggle to get back to sleep and find it difficult to wake up.

Researchers asked teenagers to report their social media use, and found more than one in three are using their phone to a ‘high’ degree.

This could have implications for their grades, the academics warned in the British Medical Journal Open.

The study comes amid growing concern about the impact of screen time, and social media use, on the mental health and wellbeing of young people.

Researchers at the University of Glasgow analysed data for 11,872 adolescents aged 13-15, whose health has been tracked since they were born. 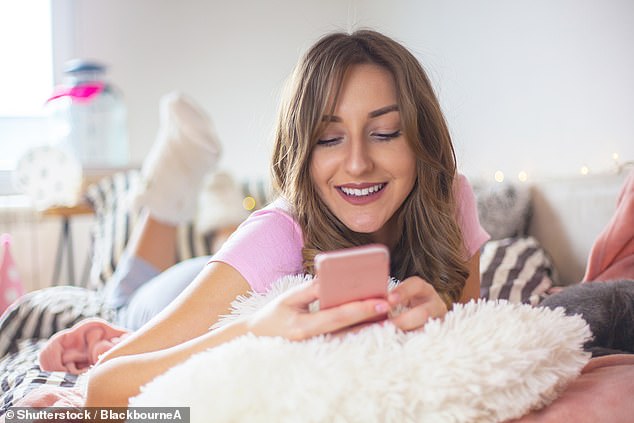 Teenagers reported how much time they spent on social media, including Facebook, Twitter, and WhatsApp, on a typical weekday.

However, the participants did not clarify the times of day they were most active on social media.

They also told of their typical sleep habits, including what time they fell asleep and woke up on both school days and weekends.

One in five (21 per cent) of teenagers used social media for more than five hours a day, classed as ‘very high’ users.

‘High users’ were classified as those who scrolled for three to five hours a day (14 per cent).

Almost a third (31.6 per cent) of teenagers said they spent one to three hours a day on it, and were classed as ‘average users’.

Little more than a third (33.7 per cent) spent less than one hour each day on social media, branded ‘low users’.

While very heavy users were more than twice as likely to fall asleep late, according to the team of researchers.

HOW DOES BLUE LIGHT AFFECT SLEEP AND WHAT CAN YOU DO?

Circadian rhythms are around 24-hours in length.

They vary from person to person – which is why some people are ‘morning people’ and others are ‘night owls’.

Natural factors within the body produce circadian rhythms as well as environmental signals such as daylight.

Irregular rhythms have been linked to various chronic health conditions, such as sleep disorders, obesity, diabetes and depression.

Exposure to light suppresses the secretion of melatonin, a hormone that influences circadian rhythms and helps with sleep.

Melatonin levels rise in the evening and stay elevated throughout the night, promoting sleep.

How can you reduce your exposure?

Furthermore, very heavy users were 36 per cent more likely to wake up throughout the night and have trouble getting back to sleep. The risk for high users was eight per cent greater than average users.

The findings are particular concern on school days, as late bedtimes can ‘predict poorer academic and emotional outcomes,’ the authors wrote.

Sleep deprivation has been linked to worse academic performance because it slows memory and impairs learning.

Dr Max Davie, officer for health improvement at the Royal College of Paediatrics and Child Health, said: ‘It’s vital for their mental and physical health that children and young people get enough good quality sleep.

‘Screen use isn’t in itself harmful, so long as it doesn’t dictate family life and prevent young people spending time on other fulfilling activities.’

But James Wilson, a sleep practitioner and owner of the Sleep Lab, who was not involved in the latest research, said the findings were not concerning.

He said: ‘As they go through their teenage years they (children) will be more inclined to go to bed later and get up later.

‘It is one study and from my work with teens, the early start times of most schools has a far bigger impact on teenagers sleep than social media use.’

However, he added that social media use can raise heart rate – by getting angry at a friend’s post – and make it harder to get to sleep.

‘Our bodies remain alert and this stops the body going through the right process to fall asleep and stay asleep,’ he said.

The results of the study, which is observational and can’t prove cause, could reflect  underlying health issues, the researchers suggested.

Nevertheless, the researchers said their study provides ‘robust evidence’ because it is on a large group of people.

Dr Bernadka Dubicka, chairwoman of the child and adolescent faculty at the Royal College of Psychiatrists, said: ‘Lack of sleep can be hugely damaging, and is often related to poor mental health and academic achievement.

‘Children and young people should also avoid using screens in the last hour before bed as this will help them sleep better at night.’

More than 28 per cent of the girls spent at least five hours on social media a day, compared with 14 per cent of boys.

Scientists have suggested blue light emitted by screens, such as mobile phones and tablets, affect the body clock and hormones that help us to sleep.

And in February, the UK’s leading doctors said parents should not allow children to take electronic devices into their bedrooms.

'Polio-like' illness cases investigated by CDC: Should you be concerned?

Boy saves his grandmother from drowning in the bath