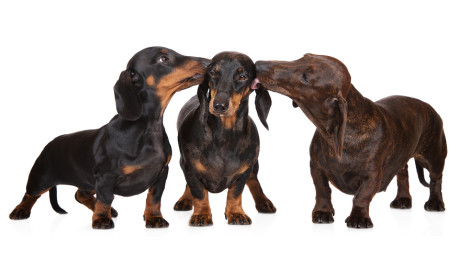 Watch this complilation of Dachshund dogs in action!

We just expect Dachshund dogs to be a bit whimsical by nature, don’t we? Sometimes referred to as hot dogs or wiener dogs, there’s something about these pups that just makes us smile from ear-to-ear. Well, the video that you’re about to watch is no different. Prepare yourself, because it’s going to make you laugh out loud as several Dachshund dogs engage in one silly exploit after another.

Ready for some hilarious cuteness? Well, grab a snack, press play and enjoy this ensemble cast of Dachshund dogs starring in the latest Fetch! Pet Care video of the week:

The chuckles started early with one of the Dachshund dogs doing his very best imitation of a python a mere 4 seconds into the video. As though the sight of him in his get-up wasn’t enough, when he started rolling around on the floor we just could not stop laughing! A comedic genius, that guy!

And speaking of genius, the pooch at :36 certainly qualifies as an actual genius…or at least he should. How this smart guy figured that advanced maneuver out is anyone’s guess, but it proves that Dachshund dogs aren’t just handsome and fun to watch, but that this breed is actually quite creative in its problem solving capabilities. Who knew?

So what did you think of these cutie-pies? Weren’t they a lot of fun to watch? Dachshund dogs just fascinate us as they’re always so cute, cuddly and up for a good time!

What Are Your Dachshund Dogs Up To?

Do you own a Dachshund? Know any other entertaining Dachshund dogs? Have a fascinating story to tell or another funny pet video to share? We can never get enough of these playful pups, so please help us keep the party going by joining us in the comments section below.

Coffee while breastfeeding: Safety and risks

US adds 1 million COVID cases in less than a week

Smoker’s cough: Too few are familiar with COPD, the cause of death only three