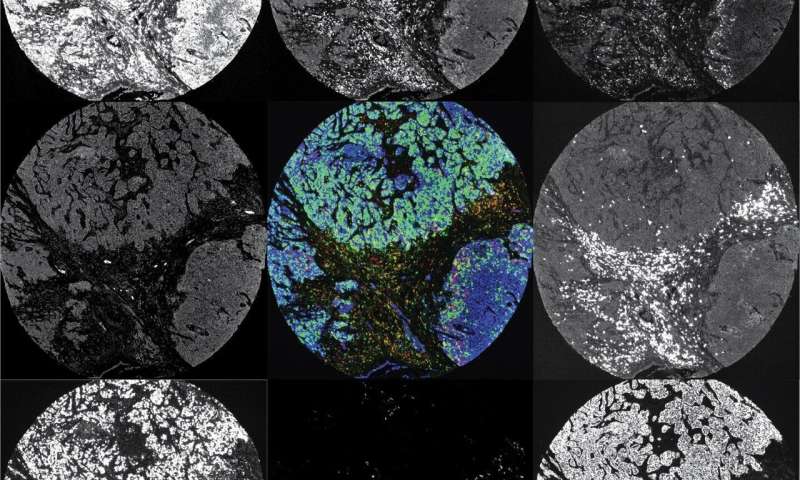 After nearly four years of work, a group of researchers and clinicians from the University of Colorado (CU) published a paper this week in the Clinical Cancer Research that shares findings from research looking at how the composition of ovarian cancer tumors changes during chemotherapy and contributes to therapeutic response.

While the standard of care consisting of surgery and chemotherapy for ovarian cancer patients is usually effective, disease recurrence and resistance are common. In fact, according to the American Cancer Society, ovarian cancer ranks fifth in cancer deaths among women, accounting for more deaths than any other cancer of the female reproductive system. In 2020 it is estimated that 13,940 women will die from ovarian cancer. There is currently an unmet clinical need to predict patients’ response to chemotherapy, which was the focus of the research team.

“Almost all patients initially respond, however, almost all patients will recur,” says Benjamin Bitler, Ph.D., CU Cancer Center member and corresponding author. “On the other hand, there is a small percentage of patients will never recur or remain in remission beyond five years. We are working to be able to better predict a patients’ response to chemotherapy.”

This group of researchers and clinicians set out in November 2016 to focus on identifying potential biomarkers or pathways to better predict how a patient’s tumor would respond to therapy. This information could change maintenance and surveillance and will take a step towards a precision medical approach for each patient.

“Our ultimate goal is that someone who is diagnosed with ovarian cancer would be able to come in and we would be able to take the primary tumor and use the two major technologies described in the research study, transcriptomics using Nanostring and multi-spectral immunohistochemistry (IHC), to get an idea about what is being expressed and what the tumor microenvironment looks like,” says Bitler.

Multi-spectral IHC is a way of characterizing the tumor’s composition. Tumors are not made of only tumor cells; they also include among other things, blood vessels, stroma and immune cells. Other research leading up to this has shown the tumor composition correlates to the patient’s prognosis suggesting that the composition of the tumor likely holds clues as to therapeutic response. The major strength of multi-spectral IHC is that the location of the different cell types is kept intact, allowing for an added dimension of data, which is the physical location of each cell type.

“However, there is a limitation with multi-spectral IHC, which is that right now we can only identify nine different markers. This is a problem when you think there are likely more than 9 different subpopulations of cells within the tumor,” explains Bitler. “Therefore, to improve our resolution of the tumor composition we are using transcriptomic analysis in parallel to further infer into the tumor composition.”

Between these two technologies, the team can characterize the important players that might be involved in promoting the tumor progression or response to therapy. In the present study, the research group examined ovarian cancer tumors before and after chemotherapy, with the goal of describing how chemotherapy remodels the tumor composition. Building on this research study the long-term objective of the ovarian cancer research group to leverage our understanding of the effects of chemotherapy on the tumor to predict response and disease recurrence.

One of the groups’ major funding sources to this point was an award through the Developmental Therapeutics program, one of four CU Cancer Center research programs.

“That award let us get to where we are right now but ultimately, we want to examine primary tumors from 500 patients.”

The team is getting ready to submit for a large federal grant later this year that will help with achieving our long-term goals. Dr. Aaron Clauset from CU Boulder is an expert in machine learning and network analysis. He will significantly contribute to aspects of the grant by developing machine learning approaches that predict therapeutic response.

Mother died after developing sepsis from surgery to remove a BUNION