It was a podiatrist who told David Lowe to change his running technique.

"He said I should be running on my toes and predominately running barefoot to strengthen up my legs," the 33-year-old St Kilda graphic designer recalls.

However, when Mr Lowe tried the new stride the next day, he experienced strong pain in his arch and ankle. In his attempt to improve his running, the marathon finisher, who was running between 15 and 20 kilometres each week, was instead left with post-tibial tendonitis. 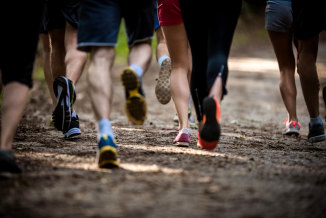 While it is common wisdom that runners should run toe-to-heel, new Australian research found there is no evidence it will prevent injury.Credit:iStock

While it is common wisdom that runners should run toe-to-heel, new Australian research suggests there is no evidence running on the balls of your feet will prevent injury. In fact, if you are changing your running style, it may do the opposite and even leave you with a slower stride.

A meta-analysis of 53 studies, conducted by La Trobe University and published in Sports Medicine this week, found there is no difference in injury reduction between distance running on your forefoot or with a heel strike action.

Physiotherapist Dr Christian Barton, who led the research, says, although switching your running style might shift where the body bears its load, it doesn't make that load disappear.

Additionally, the act of changing your running style to run on the balls of your feet instead of your heels may make you slower, particularly in the short-term, Dr Barton says, noting a heel strike is the natural distance running method for "more than 90 per cent of people".

"People are often told to run on their forefoot because elite runners are more likely to have a forefoot strike so coaches copy them," he explains. "But, if you're a recreational runner, you probably don't have this ability."

For Mr Lowe, the injury from his attempt to change his running style meant he had to stop the activity and wear a moonboot for three months. Nearly three years later, he is still undergoing physiotherapy to "slowly" get back into it.

Changing your running style to run on the balls of your feet instead of your heels may make you slower, particularly in the short-term,

"Running was my thing and I really enjoyed it for the stress relief, but then all of a sudden I couldn't do it," he says. "I haven't found anything as therapeutic."

Dr Barton says he sees one runner a week who has tried to quickly change their running style based on the advice of a coach, or something they have read. Most, he says, try to make this change overnight, leading to problems such as stress fractures.

"Even if you are only running 15 to 20 kilometres a week, that's a lot of extra load to be putting on a new part of your body."

Instead, Dr Barton says a change in running technique should ideally occur over an extended period of time, as long as six to 12 months.

"While there have been some studies that have found mid to forefront foot-strike may be the most efficient method to reduce repetitive stress injury among certain populations and may be associated with greater running speeds at an elite level, the recreational running coach should avoid changing a runner’s foot strike unless at the advice of a medical practitioner, and with the support of a running biomechanist," he says.

These nutrition can protect against the development of dementia

Does your pain feel different in English and Spanish?